It was Boyd’s show. The camp was all his idea and no one else’s. And he put the thing together with the same quiet determination that led him to the top of the World Cup downhill standings 20 years ago.
May 9, 2008 3:48 AM By: Michel Beaudry 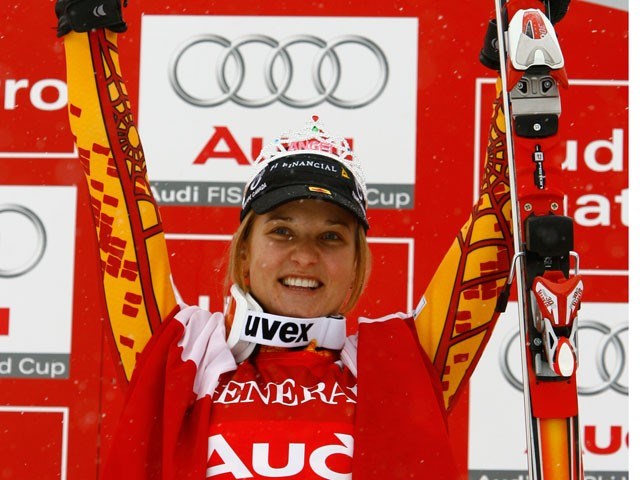 Whistler's Britt Janyk victorious at Aspen and preparing to win in Whistler.

It was Boyd’s show. The camp was all his idea and no one else’s. And he put the thing together with the same quiet determination that led him to the top of the World Cup downhill standings 20 years ago.

“I really want our girls to start feeling like Whistler is their home,” explains Boyd, now entering his fifth season as the Canadian women’s speed coach. “You see, the more time they spend here, the less they’ll feel out of place come February 2010. I really believe that could be our secret weapon when it comes time to race for Olympic gold… So any time we spend on the mountain here is positive time.” He stops speaking for a moment. Juts his chin out for emphasis. Smiles.

“Besides,” he adds, “to be able to train on winter snow in April/May — to start working on real basic stuff for next year so early in the new season — well, it’s the kind of opportunity most other teams would kill for...”

It’s no picnic organizing a camp of this calibre — particularly when you have to convince your higher-ups that paying Whistler prices for a 10-day camp is worth every penny of their investment. And up until a few months ago, some of those higher-ups weren’t entirely convinced. But when Boyd sets out on a mission, potential obstacles are simply considered challenges to overcome.

“It’s not just setting budgets,” he explains. “Or even planning the training schedule. That’s relatively straightforward. But it’s the logistics that get really complicated.” He laughs. “Coordinating the arrival and departure of athletes, coaches and support staff is hell. It’s like herding cats sometimes…”

Still, he says it’s all worth it — especially when you get the results. “I’m not going to suggest that the Whistler May camp last year was responsible for our strong showing in the speed events this past winter,” he says, “but I know that I felt the start of something good happening here last year. And I know the athletes felt it too. A successful program is the sum of a bunch of little things that come together during the season. The Whistler camp is just one of many initiatives we have planned for this year. But I think it has a role to play in our continued success.”

His words were echoed by the new team manager, Patrick Riml. Although he wasn’t in Whistler for the whole camp, he and I spent a morning together on the mountain last week while Boyd and the other coaches were putting the Canadian women through their paces. “This camp is amazing,” said the highly-touted Austrian, who just completed a seven-year stint running the U.S. women’s program. “To have this whole area to ourselves — to be able to have both the speed and technical teams train together without fighting others for skiing space — I can’t tell you how important that is to our program. Rob’s done a really good job here. I’m thoroughly impressed with his preparation…”

Riml is the strangest of creatures — a laid-back Austrian coach. I know that sounds like an oxymoron, but the perfectly bilingual coach who grew up in ski-crazy Solden is like few other Austrians I’ve ever come across in the high-heat atmosphere of World Cup racing.

And at first glance he doesn’t look all that laid-back. A big bear of a man with a few days’ growth of beard on his face, Riml displays the gruff, near-forbidding exterior that we’ve all come to associate with European ski coaches. Even the way he wears his uniform has that utilitarian, “I’m here to work,” aspect about it. But spend a little time around the man, and you quickly get another impression.

Approachable, easy-going — and disarmingly candid — Riml is the kind of guy you feel like you’ve known forever after just a few minutes’ conversation. The kind of guy you could sit at a bar with and shoot the shinola until the wee hours of the morning. Whether conferring with coaches or talking to athletes — or even interacting with W-B staff, for that matter — he projects a sense of understanding that has nary a hint of ego showing.

And when there’s grunt work to be done — poles to be carried, holes to be drilled, material to move from one spot to another — Riml doesn’t suddenly disappear down the hill. “Just that in itself is a refreshing change,” Boyd whispers in my ear.

Maybe it’s because he was badly injured as a 20-year-old racer. “I was on the Austrian Europa Cup squad,” recounts Riml, “and we were invited to Japan for a special race series. Unfortunately I broke my back in one of my first races there.” He shrugs. “That was the end of my ski racing career. So I decided to become a ski teacher instead…”

Maybe it’s because of all the time he’s spent working with North Americans. “I really enjoyed my time in the U.S.,” he says. “It’s totally different than working in Europe, of course. But it definitely has its advantages.” And he certainly got results there. With Lindsay Vonn and Julia Mancuso, Riml had one of the most potent one-two punches on the circuit.

Maybe it’s also because he’s happy to be working in Canada. “You know, when you’re coaching at the World Cup level, you’re always looking at other teams and how they are functioning,” he says, “and whenever I saw the Canadians, I thought to myself ‘Hey — I could work with that team.’” He smiles. “We’d talked about it before. But when Max (Gartner) offered me the job this year, I already knew what my answer would be.”

Whatever it is that makes him so effective as a coach, Riml brings a level of positive-minded leadership to the team that was sadly lacking in past years. “We’ve definitely added another good piece in the puzzle,” says Boyd. “We’ve been in a lot of meetings together recently. And I listen to this guy and I think, ‘Yeah. This makes sense. I can relate to where he’s coming from.’” He stops. Hesitates. “You know, that wasn’t always the case before…”

In a fortuitous twist to the Riml Comes to Canada saga, another Whistlerite has been drawn back from abroad to work with the women’s program. “How could I say ‘no’?” laughs Jim Pollock. A seasoned veteran of the World Cup wars — and the man who coached Britt Janyk from club to national team (when Britt was still a slalom/GS skier) — Pollock had recently defected to the Americans. But when his boss, Riml decided to move north, the well-regarded technical coach decided to move north with him.

“It was a no-brainer,” explains Pollock. “I had spent two years with the American Team. I was ready to come home. And with Patrick managing the program in Canada — well, I couldn’t have written a better script. He didn’t have to ask me twice…”

Still waters run deep they say. And the ever-smiling Pollock illustrates that dictum well. A man of few words, the longtime Whistler resident would rather listen to people, I think, than talk about himself. Still, when he does speak, he usually has interesting things to say. “I learned a lot from my two years in the U.S.,” he says. “To be part of their culture-of-winning — to be in the heart of it, in fact — was fascinating. It’s so different than the way we approach competition in this country. Still, I always knew I’d come back to Canada eventually.”

Although he’s not a man to be effusive with his emotions, Pollock seems genuinely excited to be back working with the Canadian women. “This is a really good time to be part of this team,” says the newly-appointed slalom/GS head coach. “We have a really strong group of coaches on both the speed and technical sides. And a lot of talent among the athletes. But more importantly, we all understand what kind of effort it takes to get results.”

He points to the current camp as an example. “Look — we’re all here working together. Coaches, athletes, techs, all disciplines — and we’re all learning from each other. I think that’s another thing that Patrick brings to this team — cohesiveness. And that means everyone is a lot more open in the way they do things…”

Pollock’s expertise — backstopped by the equally-seasoned Mark Sharpe of Invermere — should come in handy for a Canadian technical team that struggled mightily last year. True, the two GS stars — Forsythe and Simard — were out with injuries (and are slated for return this season), but the rest of the squad could barely muster past mediocre for most of the season.

Results only say so much, cautions Pollock. “There are some really strong young skiers coming up in that group,” says the coach who’ll be mostly responsible for honing the up-and-comers’ skills. “I think we’re going to see some good things from them this winter.”

The last word comes from Boyd. “Things are definitely looking up,” he says. “There’s a feeling on the team right now — maybe the best I’ve experienced in four years.” He smiles. “You know, we’ll be spending a lot of time training in Whistler over the next few months. So to everyone out there: if you see the girls at the grocery store or in the village or jogging in the park, don’t hesitate to say ‘Hi!’ Remember, we want them to really feel like they’re at home here…”