Sure, most people visit the Okanagan in summer, but with many of its star wineries open all winter when human traffic is lowest, it's a perfect way to combine winter recreation and libation.
Nov 10, 2019 12:00 AM By: Leslie Anthony 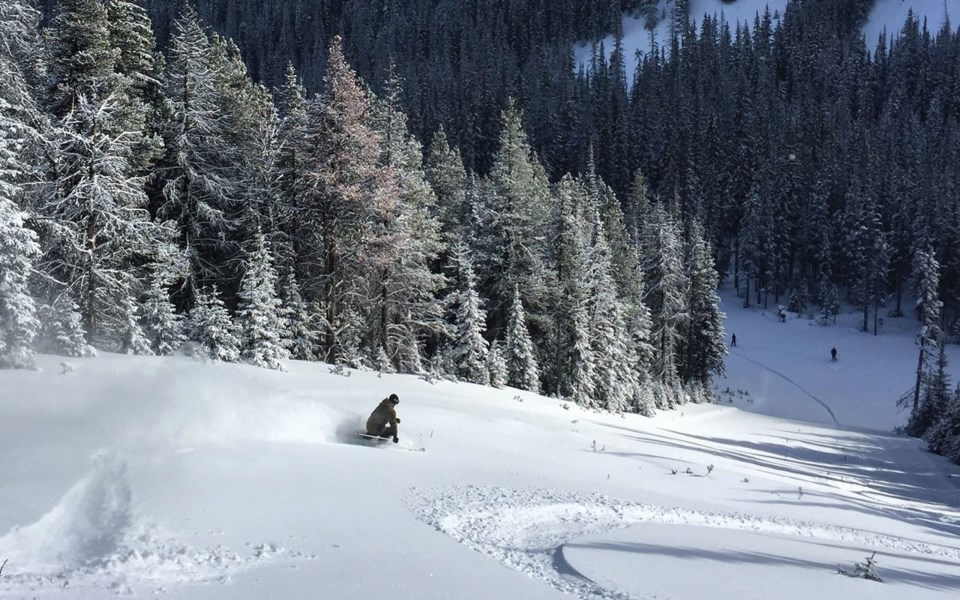 FOOD CULTURE AND SKIIING Getting after it on the backside of Apex... before getting after it at Brewski 2019 on the frontside. PHOTO BY LESLIE ANTHONY

Sure, most people visit the Okanagan in summer, but with many of its star wineries open all winter when human traffic is lowest, it's a perfect way to combine winter recreation and libation. Remember how every Cornucopia you make a pact with your partner to visit a particular Okanagan winery that has caught your fancy? Well, my advice on that echoes an Ontario government TV commercial from the 1960s aimed at getting people to start wintertime construction projects: Why wait till spring—do it now. Taking my own advice, that is exactly what I did last winter.

To start, winter is a perfect time for fat-biking. Outfitted with a slick e-bike, from the appropriately named "Freedom" bike shop in downtown Penticton, B.C., I head east up a hill onto the old Kettle Valley Railroad (KVR) route paralleling Lake Okanagan. A whiff of snow over a frozen gravel surface yields perfect traction. For the next 10 kilometres, I wheel along clay bluffs, passing the site of an old train wreck and a lookout over the distant Naramata Bench and its jigsaw of award-winning wineries.

I don't have to venture that far for my own wine fix. Returning the bike, I drop in at truly unique TIME Winery & Kitchen, built into a revitalized historic movie theatre in the heart of downtown Penticton. The original theatre was turned into four smaller ones before long-time Penticton resident, the late Harry McWatters, undertook the current conversion. Over a delicious Meritage, McWatters had once regaled me with a favourite story of going to this very theatre when he was 12; it cost 25 cents for he and a date—popcorn included.

Bunking at Penticton Lakeside Resort—a waterfront setting that includes the acclaimed Hooded Merganser Bar & Grill—I breakfast overlooking the lake as a snowstorm bears down on its gunmetal waters. Waves driven in from the north freeze on contact with the shore to create phantasmagorical shapes, some of which resemble miniature volcanoes spouting lakewater. In winter, instead of its private licensed beach, the hotel offers an ice-rink, where I make a few loops before lunching downtown at Craft Corner Kitchen, which advertises "gastro pub food with a twist." I concur: paired with an IPA, the star of the show is beer-battered cheese curds—though the fried chicken with waffles is a close second.

A 45-minute drive away, located along the KVR route I fat-biked, I stop in at historic Chute Lake Lodge, recently acquired and renovated by Hoodoo Adventures. Once a railway water-stop in the mountains above what is now Okanagan Provincial Park, the original cabins and mainstay are well over a century old. When the railway was decommissioned, the KVR became a world-renowned tunnel-and-trestle cycling route, with Chute Lake a cherished stop famed for its pies. I savour a coffee in the rustic, kitsch-filled interior while listening to a local fiddler (from Cape Breton no less) before snowshoeing onto the lake to try my luck at ice fishing—of which I have none.

Later, back in Penticton, I join Great Estates Winery for an all-time bout of indulgence: learning how to pair the delicate, dark chocolates of local French chocolatier, Maison Mulnati, with red, white, and dessert wines. Among many revelations are handmade vegan chocolates filled with organic Okanagan fruits and infused with select wine vintages.

Later I dine at Vanilla Pod, a Naramata standout located at Poplar Grove Winery, where the wine-paired sequence of beet salad, sable fish, braised beef and cheese plate is literally breathtaking—a word I have never used to describe food.

My Penticton foodie frenzy is, naturally, prelude to something more physical: skiing at venerable Apex Mountain Resort. Situated on the west side of Okanagan Lake, Apex is prized equally by freestyle mogulists and freeskiers who appreciate its challenging terrain, sunny skies, and dry powder. With 610 metres of vertical and 79 runs, Apex receives an annual 600 centimetres of snow and also features a kilometre-long ice-skating loop through scenic forest. I spend a cold, crisp morning cruising seriously fun terrain. After an early lunch at the Gunbarrel Saloon, some locals walk me out to a backside area that hasn't opened yet this season. Here we ski boot-high meringue over a hard crust—a Whistler specialty I have no trouble navigating. It's so good we go around again. And then one last time before shadows lengthen across the snow, the lifts grind to a halt, and wind from another descending storm picks up.

A solid day on the slopes would be a good place to end things. But this is the Okanagan, and the food and beverage revolution kicked off by its myriad farms and wineries is a year-long affair. I'm barely out of my ski boots before I'm dragged back into the Gunbarrel, now set up with a dozen concessions for Apex's 6th annual "Brewski"—a craft beer, cider and spirits tasting party. Clearly, I think to myself, skiing the Okanagan—Sliverstar, Big White, Apex, Mt. Baldy—while sampling its liquid largesse is something I should do more often. As I belly up for my first micro-brew, I glance out the window, where a snow-flocked tree seems to nod slow agreement.