This week marks the start of Whistler's annual WinterPRIDE event — being held for the first time in January rather then its regular slot in February, where it had positioned itself for over 20 years.
Jan 22, 2014 8:00 PM By: Clare Ogilvie 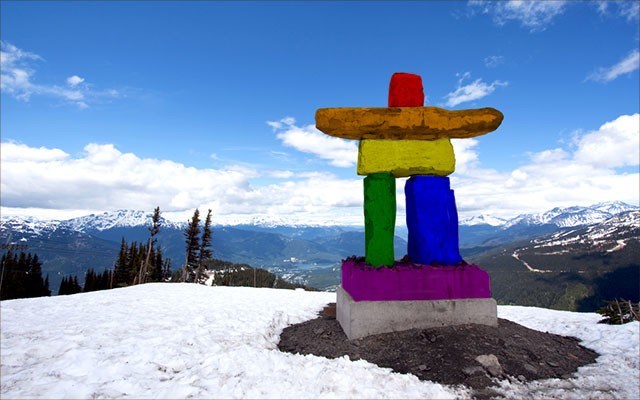 This week marks the start of Whistler's annual WinterPRIDE event — being held for the first time in January rather then its regular slot in February, where it had positioned itself for over 20 years.

You may recall it moved to the January time frame to accommodate B.C.'s new Family Day long weekend, now held February 10. The argument was that the move would spread out Whistler's overall winter business, potentially enticing more visitors to Family Day and more visitors to WinterPRIDE.

This time last year there were serious concerns that the whole festival might be scrapped, so heated were the discussions between organizers and the Resort Municipality of Whistler (RMOW) over funding issues.

Said executive producer Dean Nelson at the time: "When you look at all the other festivals receiving some funding, it would have been nice to have received a little bit of something.

"We're looking at other destinations. We've been approached by a few that love what we're doing and we may look at moving the festival or scaling it back because we just can't continue to grow it with the resources we have available to us."

At the root of the comments was the decision by the RMOW not to give WinterPRIDE any money — which comes from augmentation funding through the provincially funded $3.1 million Festivals, Events and Animation program.

Nelson argued that he needed the money to grow the event and bring in headline acts as a draw for international visitors.

An RMOW commissioned Economic Impact Assessment study of WinterPRIDE found that it generated a spin-off of $9 million of economic activity in the province, more than half of that ($4.8 million) taking place in Whistler.

That is a significant amount — but it is not just the one-time economic activity Whistler should be looking at. A report released last November by the world's leading LGBT tourism trade association shows that the annual spend by lesbian, gay, bisexual and transgendered travellers will exceed USD$200 billion for the first time in 2014.

The most recent statistics for Canada show the market is worth $7 billion annually and Vancouver is one of the top tourism destinations for this market in Canada.

Here are a few more statistics:

• Gay men and lesbians with household incomes of $250,000+ travel more, spend more and cruise more than other gays and lesbians, and indicate they prefer places that are restful, luxury oriented, and either mostly LGBT or exclusively gay;

• 83 per cent of U.S. lesbian and gay men have a current passport, compared to 34 per cent of all adult U.S. citizens;

• Gay men and lesbians travel more widely than their mainstream counterparts both domestically and internationally, and those with higher incomes travel even more frequently, especially for leisure purposes.

In considering these stats, keep in mind that a just released Deloitte & Touche report (based on Statistics Canada data) said that while tourism is one of the world's fastest-growing businesses the number of international travellers to Canada has declined 20 per cent since 2000.

Canada was one of the most popular international tourist destinations in 1970, second only to Italy. Now it's No. 18, and behind countries like Ukraine and Saudi Arabia.

The authors recommended among other things that: "Tourism organizations also need to be more innovative in reaching out to the new demographic who are travelling, and providing a product that will appeal to them."

Perhaps the RMOW should be re-considering the way funding has been handled as it relates to WinterPRIDE with this context in mind.

This year, despite meetings and discussions, the RMOW offered Nelson funding too late for him to secure any acts with it. He asked for the $37,000 on offer to be held over until next year (he had requested $105,000). He told Pique he believed WinterPRIDE visitors would make plans to come back in 2015 if he could announce some of the headliners now.

Great idea. In fact the RMOW did just that recently, telling winter visitors about upcoming summer programming by the Vancouver Symphony Orchestra in the hopes it would spur travellers to put the resort into summer plans.

But the RMOW to date has given no such assurance to Nelson, and still appears unable to deal with the conundrum that WinterPRIDE needs any funding offered months ahead of the normal FE&A announcements usually made in February.