The chorus of "Drain the swamp" resounded throughout the American heartland in the days leading up to the presidential election earlier this month.
Nov 23, 2016 5:00 PM By: Dan Falloon 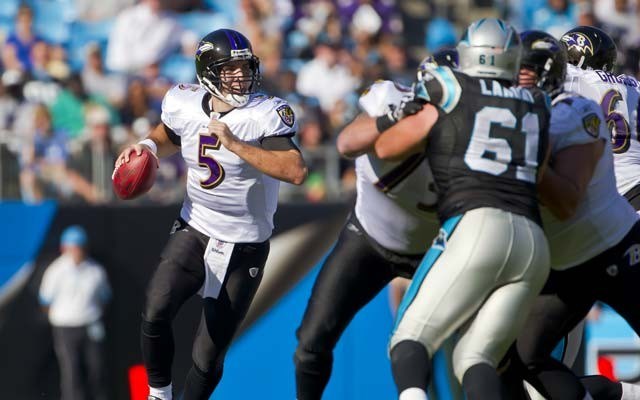 ELITE SPEAK The term "elite" is being increasingly bandied about, from debates over quarterbacks like Joe Flacco (pictured) to becoming a political buzzword. Action Sports Photography/Shutterstock.com

The chorus of "Drain the swamp" resounded throughout the American heartland in the days leading up to the presidential election earlier this month.

There was a thirst for change and the two competitive options were Hillary Clinton who, by association, represented the status quo and Donald Trump, who at least in demeanour and bluster, did not.

The latter's rallying cry implored Americans to bring in new blood that would allegedly understand and represent their values instead of trudging through four more years of the same-old, same-old. Most anyone who pointed out flaws or hypocrisy in their promises, or provided a platform to do so, was derisively branded as an "elite."

What does that even mean?

The actual definitions of "elite" hit on two buttons. Of course, there's the best, the crème de la crème, the strongest performers in any given subset of the population. If someone's actually elite at what they do, why toss them?

The other definition applies the first to society as a whole. In that context, one party criticizing the other for being full of the "elite" is the pot calling the kettle the new black. Sometimes, someone from humble beginnings rises to political prominence but, especially down south, it's a fairly rare occurrence.

Sometimes it's a money issue, as one of the major media voices blasting the so-called "elites" is Sean Hannity of Fox News.

"My overpaid friends in the media, well, they have their chauffeur-driven limousines, they like their fine steakhouses and expensive-wine lifestyles," he said in a recent monologue on his show.

For the last week, I've taken the bus from Emerald to Function Junction since my 2010 Pontiac is in a world of hurt right now, the last steak I bought was probably 25-per-cent off at Nesters and the wine I've mostly recently purchased is Obikwa Shiraz on sale for $6.29. I know Hannity's bluster wasn't directed at me, but most reporters on the campaign trail aren't exactly in a position to break the bank for great vino.

Forbes, meanwhile, has reported that Hannity makes US$29 million a year.

But, plot twist! Maybe it wasn't supposed to mean either of those things. Prominent Canadian conservative Stephen Taylor tried to explain on Twitter how he defines the term.

"'Elite' isn't the money in the bank or the university degree, it's the world view that one knows what's better for your life than you," he tweeted on Nov. 17.

If those are the notes they're trying to hit, it's a weird way of doing it. To say "elite" essentially as a criticism of the nanny state is odd, because, no offence to nannies, as part of the general population, I'm not sure someone like Nanny McPhee was elite. Mary Poppins? Though she's supercalifragilisticexpialidocious, I'd probably still only list her as a "maybe" at best.

This could devolve into the merits of libertarianism, but that's exactly the misdirection that using "elite" in this way desires.

Using the "elite" misnomer is a symptom of the direction discourse seems to be heading. The term "alt-right," seemingly implying mediocre, mid-tempo political discourse growled by Scott Stapp from Creed set to Linkin Park rap-metal (sorry for making you remember them), is actually white nationalism — but with a cute cartoon frog and other light-hearted memes!

Trump was elected, seemingly, for his willingness to "tell it like it is," fighting against so-called political correctness and euphemistic language. He was crass and crude and not afraid to hate on anyone he wanted to.

In addition to naming anti-LGBT Indiana Gov. Mike Pence as his running mate, plenty of Trump's rhetoric was troubling. But with the recent appointments of white nationalist Steve Bannon and anti-black senator Jeff Sessions to his cabinet, the ongoing cheerleading of former KKK Grand Wizard David Duke and Daily Stormer neo-Nazi Andrew Anglin praising the appointments, it seems like Trump was only scratching the surface of how his reign was going to impact vulnerable people.

The actions imply that the words are a different spin on the classic Orwellian double-speak — not opposites but understatements. The next four-plus years weren't going to be great for pretty much anyone who isn't white, straight, Christian or male. But with everyone who has since been granted great power with GOP control of both houses, especially with the party's #NeverTrump faction willing to capitulate, it looks like it's going to be so much worse.

Trump, whose criticisms of others seemed to look oddly like criticisms he's received, gave his first high-profile interview after the election to 60 Minutes in his New York penthouse seated on a golden throne. We might not know exactly what elite is supposed to look like, but this looks, at the very least, pretty damn elitist.