Last month, the Maury Young Arts Centre hosted the world premiere of útszantszan , Yvonne Wallace's compelling portrait of a biracial woman navigating her place in a Lil'wat family that was at turns raw, charming, melancholy and humourous.
Oct 11, 2019 12:30 AM By: Brandon Barrett 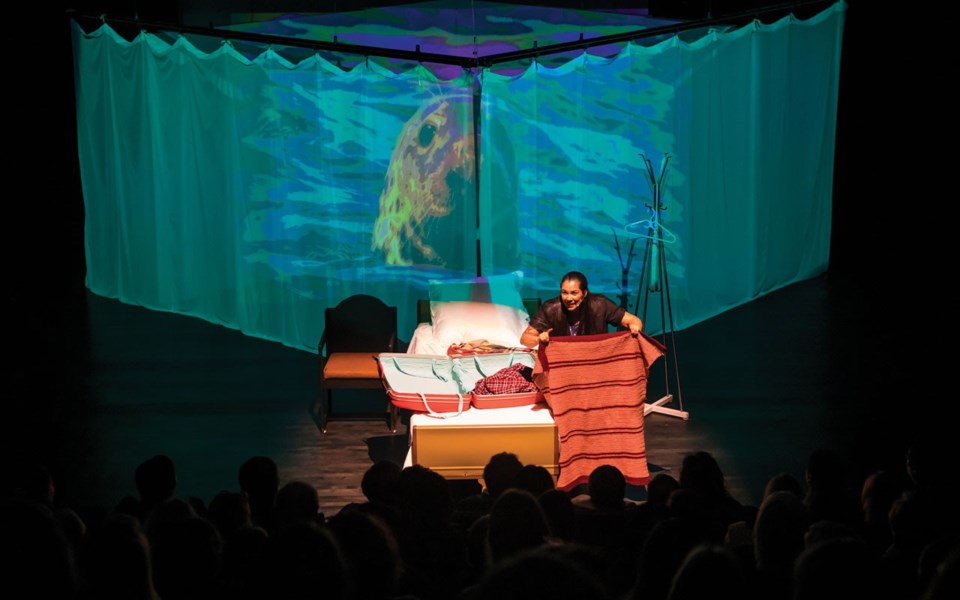 Last month, the Maury Young Arts Centre hosted the world premiere of útszantszan, Yvonne Wallace's compelling portrait of a biracial woman navigating her place in a Lil'wat family that was at turns raw, charming, melancholy and humourous. Enough cannot be said of Wallace's ambitious, bilingual performance, her sheer humanity and touching portrayal of generations of loved ones showcasing just how effectively art can bridge across cultures.

For as powerful as Wallace's intimate one-woman show was (in case you missed it, útszantszan will be playing in Vancouver from Oct. 31 to Nov. 2 as part of the Heart of the City Festival), it was perhaps the Q&A that followed that was the most transformative—at least for me and, I imagine, the other non-Indigenous members of the audience.

Over the course of six shows in four days, Wallace invited Lil'wat members both young and old to sit in the crowd, their laughter and sobs following a particularly moving line in their own language of Ucwalmícwts only adding to the play's depth. Those members also played an important role in fostering the conversation after the curtains closed, when Arts Whistler made a point of hosting a dialogue between two communities that are so geographically close, yet remain worlds apart in other significant ways.

Because of that disparity, in economics, in opportunity, in culture, as a white person living in one of the most privileged ski towns on the planet, just raising your hand to ask a question of our Lil'wat neighbours can feel daunting. Our innate fear of coming across as naïve—and worse, ignorant—often outweighs our desire for self-reflection. But it's exactly these kinds of uncomfortable questions that need to be asked in order for true progress to be made. We cannot truly affect change on any given issue until we understand it. But even understanding, I would argue, has its limits. You can read all the books you want on Indigenous issues, Truth and Reconciliation, and Canada's history of Colonial oppression, but that will likely only give you a purely academic grasp of the material. It's not enough to just understand; we must strive to relate on a human level—and that requires dialogue.

The unfortunate thing is, it's often those who are least likely to take part in such a conversation that need to hear it the most. Speaking last week with Dee Raffo, the organizer of Whistler's International Day of the Girl event, I asked her if there was ever any concern about an event tackling women's issues alienating men from attending.

I feared I already knew the answer.

"I wish we could attract more guys because it is predominantly women and girls who turn up," she said. "It's still a battle. I wish I knew what would be the golden ticket. Until then, I just want to put on engaging events that I hope anybody would want to attend just because they stand on their own merit."

It's appalling that in the Year of our Lord 2019, there are still those who would rather bury their heads in the sand than engage with the very real issues we're currently facing. As Raffo rightly put it, "women's' rights are human rights," and it shouldn't be up to historically disadvantaged groups to make the rest of us feel comfortable enough to even participate in a conversation that all of us should already be having. In my experience, the reason some men refuse to take part is because it would require a self-examination of their own thinking and behaviour. Ultimately, it speaks to a profound lack of empathy, an unwillingness to put themselves in someone else's shoes and consider an experience different than their own—a problem that plagues much of society these days.

While people coming from a position of privilege have the option to lean away from the discomfort that comes with engaging on these troubling issues, historically marginalized groups do not have the same luxury. Discomfort is simply a given in their day-to-day lives. The least we could do is lean into that sentiment, warts and all.