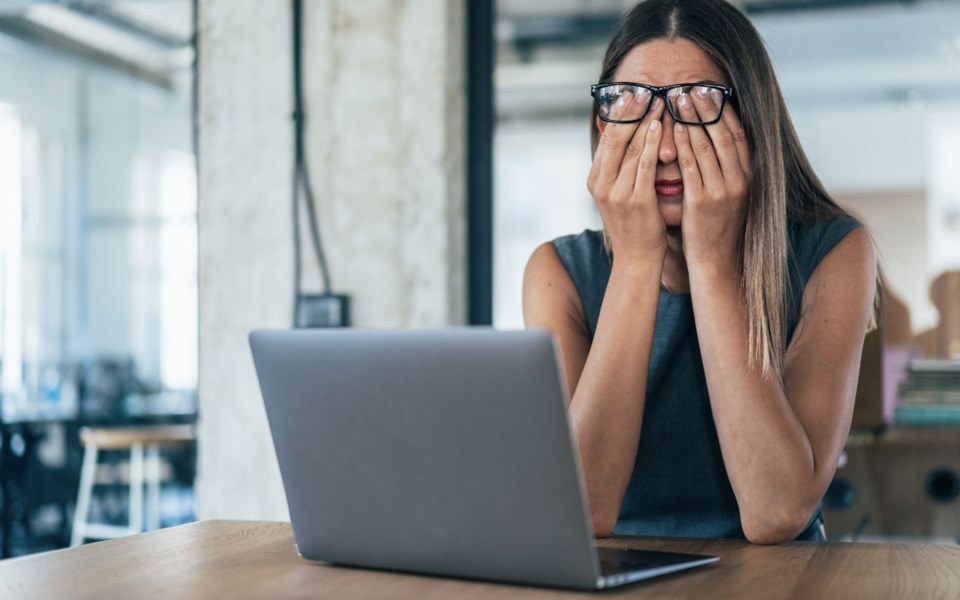 Business woman with hands on her face looking exhausted.Photo by filadendron/Getty Images

I’d say the vast majority of people in Whistler have their work-life balance pretty dialed.

Since mid-March, I have not been one of them.

When the pandemic began, I decided to start working six days a week. It was a no-brainer—I’d been working three days a week for Pique for years, happily balancing that with another part-time serving job. But in same week that the restaurant I worked for shut its doors, one of our Vancouver-based sister publications got in touch. Their editorial team was unexpectedly short-staffed and needed some help, three days a week.

Like I said, it was a no-brainer. I needed another job, I wanted to be helpful, more experience never hurts, and there wasn’t exactly anything else to do anyways. Not to mention, I really do enjoy my job (most of the time).

Keep in mind, at this point I thought lockdown would be over in a few weeks, maybe a couple of months at most. But as the weeks, and then months, went on, I completely burned out. And pushed through it, and then burnt out all over again. And again and again.

(Remember that feeling in high school or university, when you would be studying so hard for an exam that you’d find yourself staring at a page, having to reread the same sentence over and over because you were no longer absorbing the words? Picture that feeling, but with writing.)

With so many people out of work due to the pandemic and essential workers putting themselves at risk on the frontlines, I still feel intensely guilty ever complaining about having two jobs that let me work from home, but without the usual routine of heading into an office—and having to leave said office in order to accomplish basic tasks like making dinner—any boundaries between work and home life were effectively erased. As my to-do lists got longer and longer, my workdays started stretching longer and longer into the evenings. There were way more days than I’d like to admit spent working from the time I woke up to the time I went to bed.

I’m not alone in that, as it turns out. As Bloomberg reported at the end of April, employees working from home in the U.S. were logging an extra three hours per day on the job, on average, than they were before COVID-19 hit. That statistic came from NordVPN, which tracks when users connect and disconnect from its service. In the same article, the CEO of a Toronto-based tech startup confirmed her 15 employees were working, on average, 12-hour days, up from nine hours pre-pandemic.

But, despite the fact that I was working far more hours, most days I didn’t necessarily feel like I was producing better quality work than in the Before Times.

There’s data to back up my experience there, too. A report from Business Insider cited studies that found working more than 40 hours a week has negative effects on the quality of your work. According to that report, we can handle working 60-hour weeks for three weeks before those 60 hours become less productive than a standard workweek.

After months and months of promising myself I’d cut down on my hours, I finally made the decision to drop down to five days a week beginning around the holidays. It has been, without a shred of exaggeration, life-changing.

Having that extra day to reset, avoid looking at my phone, and get outside for some fresh air without having to stress about making it back in time for a Zoom meeting has made all the difference. I still experience feeling rundown from time to time, but overall, my head feels clearer, I’m taking better care of myself, and I already feel more motivated and more productive when I am on the clock.

These differences I feel with just one extra day off have me considering what kind of collective benefits we’d see if our society shifted away from the typical Monday-to-Friday, minimum-eight-hours-per-day grind.

In 2019, Microsoft Japan’s experiment with shortened weeks found that the company’s productivity was boosted by about 40 per cent. Meanwhile, in a Facebook Live earlier this year, New Zealand’s Prime Minister mused whether four-day workweeks could help her country’s tourism industry recover from the pandemic by giving people more time to travel.

According to a recent Angus Reid poll, there’s no lack of support for the idea of a shortened workweek in Canada. Survey results released last June show 53 per cent of Canadians think a four-day or 30-hour work week is a good idea, compared to just 22 per cent of adults who think it’s a bad idea, and a quarter of respondents who said they’re unsure.

So, put me firmly into the “good idea” camp.

If there’s one thing I hope comes out of the COVID-19 pandemic, it’s an unprecedented commitment to our health, happiness, and quality time spent with the people we love. While I’m sure the shift to a shortened workweek would have negative implications somewhere along the line, if getting the same amount of work done in fewer hours—or even the same number of hours compressed into fewer days—gives us more time to allocate to that commitment, I struggle to see a downside that would outweigh the benefits.