Opinion: Changes need to be made in the NHL’s department of player safety 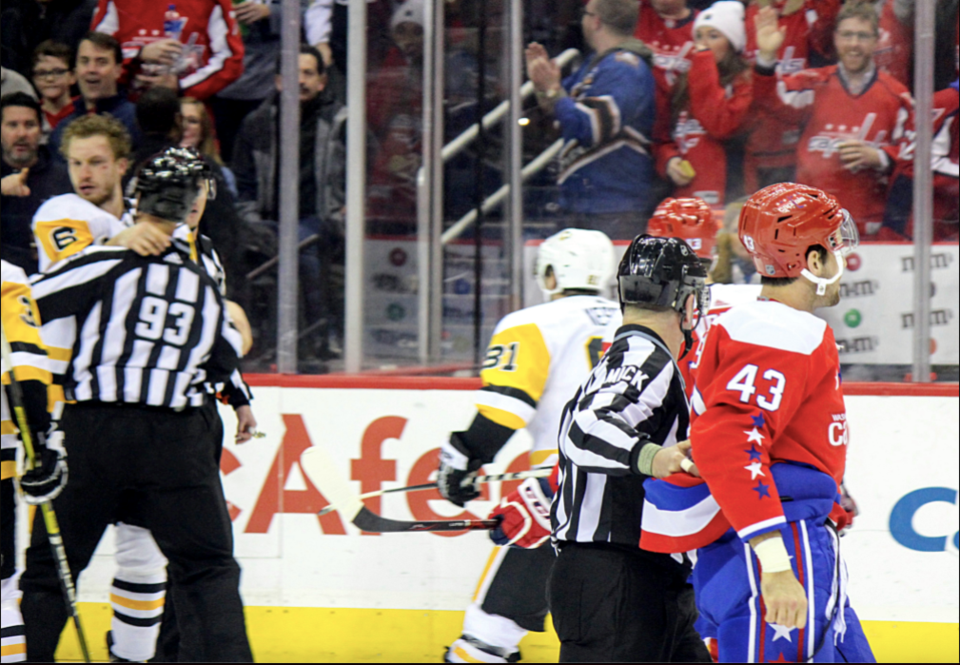 The Washington Capitals' Tom Wilson has been terrorizing the league and injuring players since he first stepped on NHL ice, writes Harrison Brooks this week.Michael Miller/wiki commons

Exactly two weeks ago, with boxes stacked to the roof of my Honda Civic, I completed my 1,600-kilometre move from Saskatoon, Sask. to Whistler, B.C. And this will be shocking to no one, but there are not a lot of similarities between Saskatoon and Whistler.

With new routines beginning, a new job on the horizon—I am Pique’s new sports reporter—looking for a place to live and getting accustomed to only seeing about 40 per cent of the sky, understandably, it didn’t take long before I was craving some normalcy and familiarity in my life.

Just four days after arriving, I got a small sliver of that normalcy—but not in a good way. On May 3, 2021, Tom Wilson, forward for the Washington Capitals, went on a rampage that included punching New York Ranger’s forward Pavel Buchnevich in the face repeatedly while he was already down on the ice and rag-dolling, and body-slamming and subsequently injuring Rangers’ star Artemi Panarin when he came to the aid of his teammate.

It was the most talked about moment in the NHL that week, with hockey fans young and old wondering what size of suspension Wilson will get: Because surely he will get a suspension.

Tom Wilson has been terrorizing the league and injuring players since he first stepped on NHL ice, and he’s received his fair share of suspensions for it. So, as the repeat offender that he is, I was of the opinion that he should have been suspended for the remainder of the season, playoffs included.

We’re talking about a league that thought it was a genius move to hire George Parros, a former goon and the owner of a clothing company dedicated to making hockey violent again, as the head of the Department of Player Safety.

The New York Rangers, on the other hand, weren’t quite as unsurprised at the lack of a real punishment as I was, and even went so far as to release a statement calling for Wilson to be suspended indefinitely and for the firing of George Parros.

And they kind of have a point. Every year it becomes a talking point among fans that the suspensions handed out have no discernable consistency to them. So, when you combine that with the fact that Parros has probably caused way more concussions in his career than he received, it starts to become clear that maybe there are people out there better suited to the role of protecting the health and safety of NHLers. Perhaps someone like Paul Kariya or Marc Savard, who both know first-hand how devastating concussions can be, would be a good fit for the role and would take the job a little more seriously than the guy who owns Violent Gentlemen Hockey Club.

The magnitude of this particular screw up was front and centre just two days after the incident when the Capitals and Rangers faced off again. That game opened with a line brawl, had seven fights throughout and even resulted in the suspension of Pavel Buchnevich for crosschecking a Capitals player in the face.

The worst part about all of this is, all that violence, that maybe could have been avoided had Wilson even received a one-game suspension, overshadowed what should have been one of the best stories of the year. In that game, TJ Oshie scored a hat trick in his first game played after the passing of his father.

And as much as I am a fan of physical hockey, it’s stories like Oshie’s that make us fall in love with sports. And it’s a real shame that was put on the backburner because the NHL dropped the ball again.

Whether it is player safety, suspensions or supporting things that are bigger than the game, like the Black Lives Matter movement, the NHL has been, and will continue to be, one step behind everyone else.

And the sad truth about all of this is that until the NHL’s old guard is finally removed and replaced by people who have a vested interest in actually making hockey a safe place for everybody, the NHL will always be playing catch-up on things that matter more than the game.

So, if like me, you ever find yourself in a situation where everything around you is new and different and you are craving some familiarity in your life, you can take solace in the fact that some things, like the NHL dropping the ball on important issues, will never change.

If you have any sports stories you want to share don’t hesitate to reach out to me at sports@piquenewsmagazine.com.