OPINION: So much for saving our (spring) season 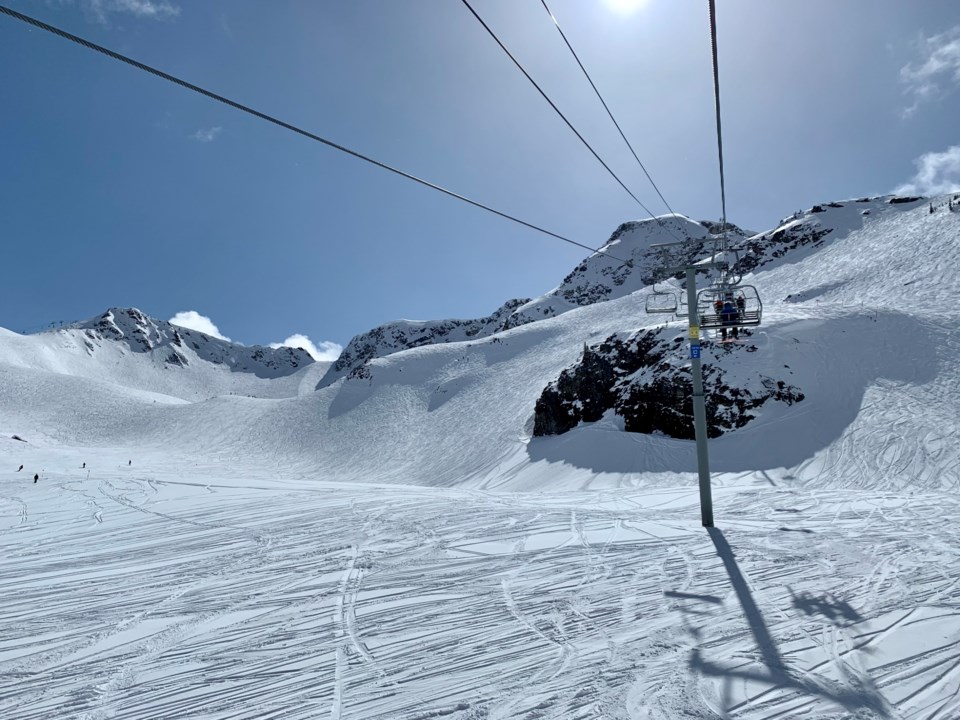 The view from what was most likely this writer’s last ride up Whistler Blackcomb’s Peak Chair this winter.Photo by Megan Lalonde

Blue skies, a few centimetres of fresh snow and a day off. What could kill a good mood on a Monday like that?

A text informing you the mountain is closing, apparently.

B.C. Provincial Health Officer Dr. Bonnie Henry announced on March 29 that Whistler Blackcomb, indoor dining and group fitness classes across the province would be shut down at midnight, until at least April 19. Whistler Blackcomb confirmed Tuesday that it wouldn’t resume winter operations when that public health order lifts. Other ski resorts across the province can remain open.

Henry attributed the decision to yet another spike in cases in Whistler—“particularly in the last week with the more worrisome cluster of the P1 Brazil variant of concern,” she noted—as well as transmission as a result of travel between Whistler and other communities across B.C.

Standing in what was a pretty packed line (by pandemic standards) for Peak Chair on Monday afternoon, nearly everyone was glued to their phone screens, shaking their heads, their disbelief somehow still visible through masks and goggles.

There was a pit in my stomach brought on by the uncomfortable feeling of déjà vu. That text pulled me back to the last sunny March day, 371 days ago, when we heard the mountain would be suddenly closing for what was initially supposed to be two weeks.

But this time, the circumstances feel different. Gone is the spooky precariousness of last March, replaced instead with the unrelenting pandemic burnout that’s resulted from a year’s worth of social distancing.

Pre-pandemic, it was easy access to the outdoors and the people in this town that made dealing with a housing crisis 4,500 kilometres away from family more than worth it. This winter, I can’t overstate how much the freedom to hop on a chairlift, see friends outside and focus on something other than news for a few hours has been the literal breath of fresh air that’s truly kept me going. It’s a massive bummer to have that outlet unexpectedly taken away.

Despite another recent rise in cases, the shock of a sudden closure also feels stronger this time around because it seemed like we were almost out of the woods. The safety measures businesses implemented seemed to be working, people were being vaccinated and Whistler Blackcomb had just dropped its spring operations plans.

In the grand scheme of things, no, shutting down a ski resort at the end of March versus May is not the end of the world. But it’s demoralizing to find ourselves one year into a pandemic and feel like things are getting worse, not better.

I get why this closure seems unfair, too.

All winter long, the rally cry has asked locals to make good decisions to “be the reason we keep our season.” It’s still difficult to make sense of the fact that while British Columbians haven’t been allowed to visit a friend’s house since November, many Whistlerites have had to interact with visitors from other provinces or parts of B.C. on a daily basis at work, and now it seems like we’re the ones paying the price.

But realistically, these visitors and their credit cards have likely paid a lot of locals’ rents. It’s also no secret that while the vast majority have been responsible, not every single member of the Whistler community has been following public health orders to a T, whether that’s been by choice or the by-product of a tricky housing situation.

And I understand why the call to close Whistler Blackcomb was made—with an extra-contagious variant floating around, it’s easier and more effective to shut down a single resort and eliminate the draw than shut down a highway or convince people not to travel ahead of a long weekend.

I don’t think it’s productive at this point to debate whether some people are more at fault for our current predicament than others. Blaming a specific group might be cathartic, but it’s not going to reopen the mountain or change the fact that we’re in the middle of an outbreak.

Instead, I’m sympathizing with the people who this decision will impact most, beyond the initial disappointment of missing out on slushy, lift-accessed spring laps for a second year in a row: the hospitality workers who are once again out of work with little notice, local businesses struggling without tourism and Whistler Blackcomb staff who’ve worked so incredibly hard to keep the mountain running safely this winter before being blindsided with this announcement. In my view, you all succeeded in saving the season (at least the majority of it) and giving locals something to be stoked about—thank you.

I also feel for the public health officials tasked with making these decisions—people that have the expertise necessary to make these tough calls that I most definitely lack. I have to have some faith that they’re making the best decisions they can with the information and options they have available. Sure, this decision sucks, but if it can save one person’s life or prevent one person from suffering, then it’s all worth it.