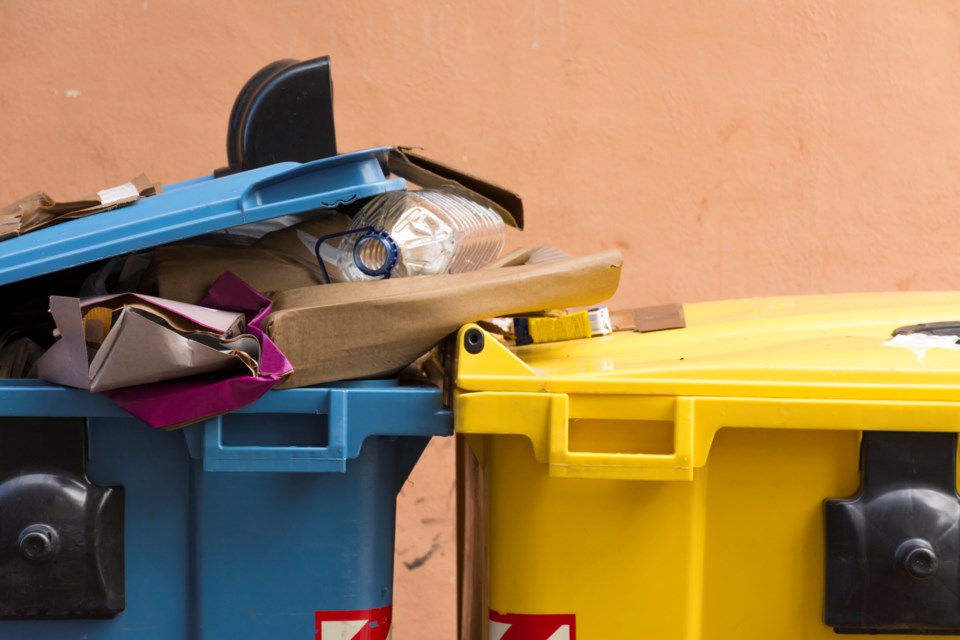 The government needs to step in and mandate packaging types for manufacturers to make recycling easier for consumers.Photo by VSargues/gettyimages.ca

If the current state of recycling in my strata complex is any indication, the human race is DOOMED—as is Whistler’s long-term plan to become a zero-waste community. It’s not that things aren’t being recycled, but recycling has been a thing in Canada for 35 years now and still an awful lot of people have no idea what they’re doing, or care if they’re putting waste into the right bin. People have stopped trying.

Then one day it arrived: The Blue Box. It was the first mass urban recycling program in North America, giving people an easy curbside way to divert glass, newspaper, and some plastic bottles from the landfill. It was a golden age for neighbourhood gossips that could now tell at a glance who had a drinking problem.

The program was a huge success. Everybody made an effort to do their small part for the world, peeling labels and rinsing jars to make their waste easier to process. Peer pressure probably helped—nobody wanted the neighbourhood gossips to know they had a drinking problem and weren’t being kind to the planet.

But while mass recycling got off to a good start everywhere that followed Toronto’s footsteps, including Whistler, people have a sad tendency to lose interest in these things over time. Labels stopped getting peeled. Jars were no longer being rinsed. People stopped checking the little tags to help them distinguish between different types of recycling.

I spend way too much time—and my neighbours do it too—separating other people’s recycling into the right bin (assuming it wasn’t just dumped on the floor) so loads aren’t classified as contaminated and diverted into the garbage. Trips to the garbage room are not good for my blood pressure.

I can’t explain what’s going on. It doesn’t help when stories come out about recycling that isn’t actually being recycled. It wasn’t that long ago that recycling waste diverted to China was deemed too contaminated to make use of and was no longer accepted. Recycling waste sent to the Philippines almost led to a declaration of war. B.C. then switched to a more regulated and expensive homegrown recycling option that has had well-publicized issues as well.

However, while there are lots of legitimate concerns about the effectiveness of recycling, I’m willing to cut people a little slack and assume they’re just confused.

Because it is confusing: a lot of our packaging doesn’t fit neatly into a single bin, or into the limited selection of bins that fit into the average-sized garbage room. There are too many different ways to dispose of too many things, which themselves aren’t always designed to be easy to dispose of.

It’s not our fault. It’s also something we could fix tomorrow if government went an extra step and passed some new laws about packaging materials and product design.

There shouldn’t be any doubt about where things are supposed to go. There should be one type of corrugated cardboard, one type of soft plastic, one type of hard plastic, one bin for glass and metal, and one bin for all types of compost in one approved compost bag. Some types of paper like gift wrap aren’t recyclable either, and shouldn’t even be available. And everything we buy should have one bright, colour-coded number on it that indicates which of the six or seven bins it goes into. If there’s no number on a package—and there really should be by now—then people will know that it goes into the garbage.

We also need to eliminate confusing mixed-media packaging. There’s no need to put a plastic window on a pasta box or a paper label on a pasta bag. Glass and plastic jars and bottles shouldn’t have paper or plastic labels that need to be removed when they can just print the product info on the side. Nut milk bottles made of cardboard should not have plastic screw-top lids. Shipping packages shouldn’t have plastic bubble wrap on the inside unless they have the same kind of plastic on the outside and can be recycled in one bin. Packing peanuts should be made out of one thing, and one thing only, that is easy to reprocess or compost. Styrofoam should either be banned or made from one type of material that can be recycled or composted. Tetra Paks, re-sealable freezer bags, chip bags, and other disposable packaging have to be made in a way that makes them easier to recycle.

I could literally go all day with examples of bad packaging. Recycling—which should be one of the easiest ways to care for the planet—just isn’t easy enough. There needs to be a simple, universally accepted system for diverting waste with no confusion or grey areas.

Zero-waste is a noble goal, but I worry that it doesn’t have a chance of succeeding until recycling takes zero effort.