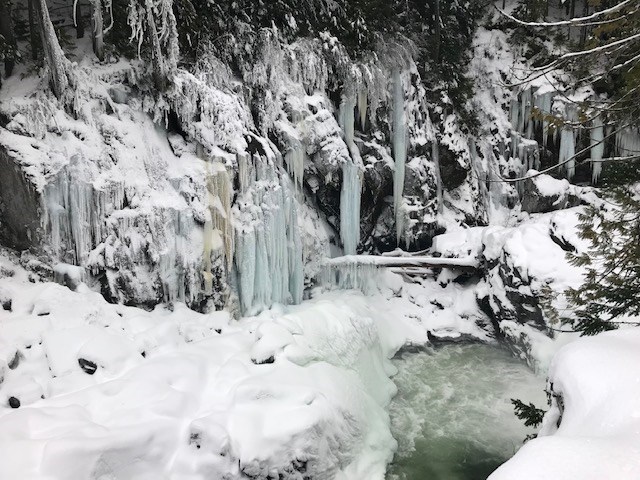 Nairn Falls is a sight to see in the winter. Now there's extra parking for visitors all year long. Photo by Alyssa Noel

There have been many, many times I haven’t agreed with decisions made by BC Parks. I was exceptionally mad when they decided to ban dogs from Joffre Lake Provincial Park—not so much because I brave the crowds very often, but because it felt like a move to prioritize tourists over locals.

I am also regularly frustrated by their (seemingly unspoken) communications policy to never let reporters—or at least me, anyway—speak to an actual person when I have questions for a story.

The decision to leave provincial parks in the Sea to Sky corridor closed this spring longer than other parks was also disheartening.

I know many of you have more complaints to heap on to this list (the Cypress ordeal is out of my jurisdiction), but the purpose of this column is actually not to bash BC Parks—rather it’s to offer an observation that has made me cautiously optimistic about the relationship between the government entity and the public.

First and foremost, BC Parks has been chronically and epically underfunded for a long time when you consider just how well-used, loved, and visited many of the parks are—especially in the corridor. Destination BC (which received $51.3 million in the 2020 budget) regularly promotes BC Parks to generate some of the $18.4 billion in tourism revenue (that number is from 2018) each year, but BC Parks itself only got $40.6 million in funding this year.

Even in a year when tourism fell drastically—perhaps an understatement—the parks were COVID-proof and still busier than ever.

To that end, it has seemed like any time local recreationalists, outdoor clubs, or advocates have made a suggestion to help people better access these public resources, the default response has been: “We don’t have the money.”

And while that probably is true, it’s still frustrating to have access to something that belongs to all of us cut off without a good enough reason. (Actually, considering it’s unceded territory of Lil’wat and Squamish Nations, it’s more accurate to say it belongs to them before the rest of the public.)

In the last few weeks, though, something has changed. Someone at BC Parks, it seems, is actually taking the time to listen and make some small changes.

One example? Outdoor clubs and backcountry skiers and snowboarders have been advocating for BC Parks to spend $12,000 to $18,000 to clear parking spots at the Rubble Creek trailhead to allow winter access to Garibaldi Provincial Park rather than—in conjunction with the Ministry of Transportation—towing cars parked along the access road and highway like they did last season.

Initially, it seemed, officials decided they didn’t have the budget, but then in an abrupt turnaround, at the beginning of December they announced they would fund the clearing—at least for this winter.

Fast forward another two-and-a-half weeks. Suddenly, BC Parks agreed to a partnership with Tourism Pemberton and Daniel Schranz Consulting Ltd. to allow the day-use parking at Nairn Falls Provincial Park to remain open for the winter.

While they won’t be funding that clearing, they gave the essential stamp of approval to allow a local organization to oversee it.

It might only be two small changes, but it seems to signal a shift that someone at BC Parks is suddenly open to listening to the locals who live, work, and play in those places.

Sure, these could be the only bones they will ever throw, but perhaps it could mean the new government is taking a different approach to managing our parks.

At any rate, it feels like a show of goodwill. Any time you feel heard—like your concerns are not being shouted into a void, your ideas and insights not just ignored—it’s both encouraging and empowering.

As we transition to 2021 and cautiously hope for a better year ahead, let’s include a better relationship with BC Parks in that positive thinking.

After all, if 2020 taught us anything, it’s that you just never know what’s possible.