Putting the win in Winnipeg once more

When it's come to cheering on the Winnipeg Blue Bombers, or the Blue and Gold as it were, there's been far more blue than gold for the past three decades.
Dec 6, 2019 12:00 AM By: Dan Falloon 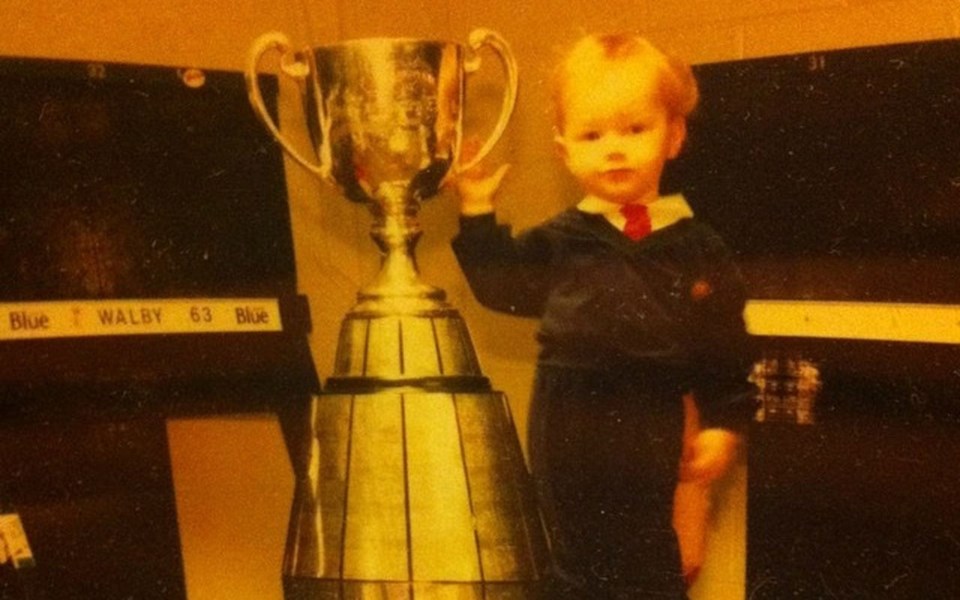 Pique sports editor Dan Falloon with the Grey Cup after the Winnipeg Blue Bombers victory in 1988. The Bombers only won once more, in 1990, before their triumph in 2019. Submitted

When it's come to cheering on the Winnipeg Blue Bombers, or the Blue and Gold as it were, there's been far more blue than gold for the past three decades.

Incredibly, though, Winnipeg's CFLers recently broke a nearly three-decade stretch of championship futility, defeating the favoured Hamilton Tiger-Cats 33-12 in a jaw-dropping performance (well, to we Winnipeggers, anyway) to take the Grey Cup.

As a 32-year-old, it's the first championship victory I can remember; the Bombers hadn't won since dismantling Edmonton 50-11 down in Vancouver in 1990.

It was exciting to watch the whole way, even if there was a sense of dread until the final whistle went to close the game at the fourth quarter's end. There had been so many blown leads, so many bungles, so many disappointments in the intervening 29 years, namely the 2001 offensive juggernaut that finished the regular season 14-4 yet blew the Grey Cup game to an 8-10 Calgary Stampeders outfit.

This time, it almost looked like this one would be even more heartbreaking given how easily the Bombers made it look throughout.

While there's certainly joy in winning, I felt a bit of internal apprehension about celebrating too hard or enjoying it too much. It was a bit embarrassing that the drought went on as long as it did, given that the Canadian Football League has been, at most, nine teams for much of that stretch. When it was larger, the added teams were, for the most part, American-based patsies that didn't put up a huge challenge. (We've all collectively agreed to forget the Grey Cup was owned by Baltimore for a season, right?)

Even from afar, it was great to see the city celebrating. There hasn't been much to cheer about hockey-wise since the original Jets cut through the World Hockey Assocation to take home titles in three of the seven seasons it operated. The minor-league baseball team, the Winnipeg Goldeyes, has four championships since coming into existence in 1994, but beating Sioux City and Wichita just doesn't have the same air about it.

Even though it was my first time watching a championship, I felt even happier for other folks. I was thrilled for my dad, a CFL diehard who will regularly watch three or four games a weekend, not just the Bombers. We regularly went to games at the old Winnipeg Stadium when I was younger, hitting up the pregame party in the end zone before kickoff. The team was, well, not very good in those early years in the mid-'90s. I vividly remember them starting the 1998 season 0-10 and holding a Guaranteed Win Night where everyone in the stands got a free ticket for another game if they lost. Even at age 11, I was getting cynical enough to be excited for something free for their futility; sure enough, they dashed that, and eked out a 36-35 win over Saskatchewan.

My dad woke up early on Saturdays and took me to Bomber breakfasts at a downtown restaurant to meet the players and get autographs.

I'm also a little heartbroken that our next-door neighbour when I was growing up didn't get to see one last title. She was the biggest Bomber fan I'd ever met, holding season tickets for well over 50 years.

Even in the throes of mediocre or dismal performances by the home team, Toby would stay in her seat, reasoning that since she paid for 60 minutes of football, she was going to watch it one way or the other. That stood true no matter the weather. During a pouring, cold October game where the Bombers were getting clobbered by Edmonton, she stayed until the clock ticked down to zeroes.

"Win or lose, they're still my team," she always used to say.

In the time I knew her, I can think of only a home game or two Toby missed, and even as she got older, she was game for walking several blocks to the stadium from the free street parking (or grey-area parking along the train tracks behind a big-box development near the stadium).

She unfortunately didn't get to see the most recent title, having passed last December at age 94.

I admired her dedication, which I found harder to keep up since coming west. Even though the B.C. Lions, just down the road in Vancouver, generally field a competitive team (this past season excepted), there's just not the same feel for the CFL out here. I would follow the Bombers in recent years, but not with the same vigour that I had when I lived in Winnipeg. It's not a distance thing, as my interest in the Jets stayed the same.

It might be because the Lions' following isn't as rabid as it is in Winnipeg, or any other of the prairie cities, since football fans turn their attention to Seattle for the Seahawks, and it's harder to feel interested in the league if no one else around you is.

And with limited interest in tentpole cities like Vancouver, Toronto and Montreal, one hopes the league is still long for this world.

In communities like Winnipeg and Regina and Hamilton, it's great to have a team be small enough to feel like it's woven into your community's fabric, which you don't get in the same way with an NHL team, but big enough that a win feels like something truly special.