Roll up the rim to lose

Ever since my coffee machine decided to stop working last year, my French press has become my most treasured possession.
Mar 8, 2019 4:00 AM By: Megan Lalonde 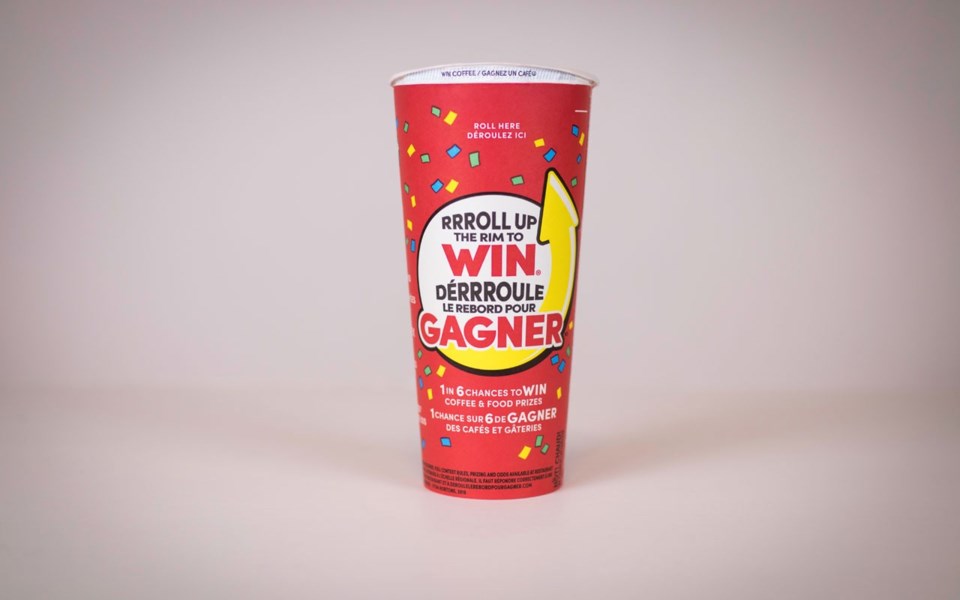 Ever since my coffee machine decided to stop working last year, my French press has become my most treasured possession.

As a self-admitted caffeine addict, it provides me with the life-sustaining fuel I need to keep Pique's Facebook account running smoothly, or to carry on a conversation before 10 a.m.

But one morning a couple of weeks ago, I was running a little behind after heading to the gym for an early-morning workout. Doing the mental math, figuring out how much time I had to get myself together for the day, I came to the crushing realization that I was out of both coffee AND my favourite soy creamer AND I didn't have enough time to restock.

But then I remembered what time of year it is and my mood immediately turned around: Roll Up the Rim to Win.

The feeling of anticipation as you drink the last few sips, bite down and wrangle the edge of your cup upwards to find out what fate the roll-up-the-rim gods have bestowed on you. The rush of relief and excitement you feel when you see 'WIN/GAGNEZ COFFEE' or 'WIN/GAGNEZ DONUT' printed on the rim (Our editor even did a fist pump after winning a coffee just as I sat down to write this.) The utter defeat when the cup politely asks you to play again.

So, with Tim Hortons conveniently located between the gym and home, I determined it would be irresponsible to not stop in and get a coffee. After all, what if I was meant to win a car that day? I can't squander those chances!

But as it turns out, drinking out of those red paper cups fills me with slightly less joy than it once did.

Maybe it's the fact that our planet is currently hurtling towards the point of no return when it comes to climate change, or maybe it's just an effect of growing up and becoming more aware of the impact my actions have on the world around me.

Either way, I'm finding myself more concerned about where that disposable cup is going, or how much energy went in to producing a cup I used for a few short minutes than whether or not I'm about to win a doughnut.

These days, I try my best to make a habit of bringing a reusable travel mug when I need a caffeine kick. Here in Whistler, we're pretty lucky—most local coffee shops offer compostable cups for the (many) days I forget.

But the thin plastic coating that makes Tim Hortons' disposable paper cups waterproof means the 260,027,640 cups circulated by the coffee chain during this year's Roll Up the Rim contest are unable to be recycled by the vast majority of conventional recycling facilities.

Instead, those cups will most likely end up in a landfill, along with the hundreds of empties I've cavalierly tossed into the bin during my quarter-century of life (or just during my four-year undergrad, if I'm being honest), and the millions of cups Tim Hortons customers have purchased—and discarded—since this contest began in 1986.

A quick Google search informed me that these cups take about 20 years to decompose. That also gave me a guilt-triggered pit in my stomach.

Worse yet, Tim Hortons' famous contest is actively encouraging people to choose disposable cups over the more sustainable option. I'm a prime example: the slim chance of winning a car—let's be realistic, a free coffee—was enough to get me fired up and through Tim Hortons' doors. Ugh, the guilt pit just got bigger.

But while I sit at my desk and complain about how wasteful it is, a trio of young Calgary residents is taking action to fix it.

Eve Helman and Mya Chau, both 12, along with 16-year-old Ben Duthie, launched a Change.org petition encouraging Tim Hortons to introduce fully compostable or recyclable cups, and/or introduce an alternative version of the contest for those who wish to use their own mugs. (I signed it. The guilt has yet to ease).

It's clear people agree with them: As of press time, the petition had garnered over 170,000 signatures. This follows a 2016 petition by fellow Alberta resident Ally Fraser looking for a way for re-useable mug users to participate that drew over 19,000 signatures.

Time will tell whether Tim Hortons listens. And if my guilt outweighs my desire to win free coffee.

Oh, but if you're wondering, I didn't win anything with that cup except a chance to play again. I think I'll stick to my French press.