Waste not want not 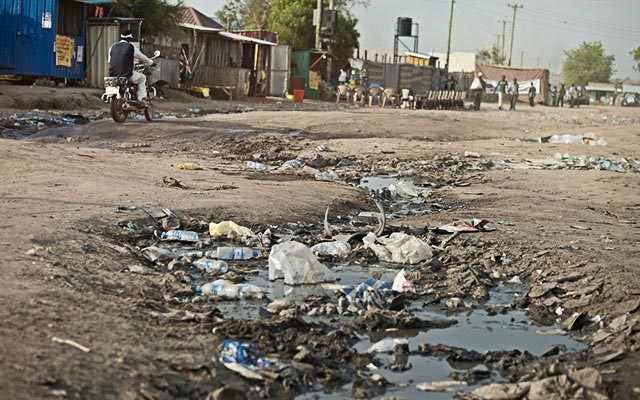 Ditch full of sewage and garbage in street of South Sudan. shutterstock.com

Spend time in developing countries and you know: daily life confronts the more acute problems of humanity. These aren't issues wrestled with solely by those who live there, but something more: the problems of the greater world writ large, something we're all responsible for and can help do something about.

This applies to everything that, at some level, you become inured to in Africa, Asia or Latin America: large numbers of people, crushing poverty, health issues, and, often hardest for most, pollution — streets, beaches, and watercourses literally filled with garbage and raw sewage. The fetid smell is omnipresent, but not so the ramifications of what it means, nor your personal contribution to the problem as a global consumer or patron of a business in these countries. I didn't, for instance, not eat at a Sri Lankan restaurant simply because it dumps its sewage and kitchen waste into the local creek running behind or underneath it. I just shut my eyes, plugged my nose, and enjoyed my meal. When I eat at a restaurant or buy products at home, I needn't shut my eyes or plug my nose... yet for every bite of food or minute spent on a cell phone in Whistler, I know that garbage, human waste and toxic chemicals are being dumped somewhere, increasingly in developing economies that Canada cultivates without any concern to the actual social and environmental costs.

At the heart of the problem is the Western world's most insidious export: the desirability of a materialistic society. As the developing world tries to emulate the West's so-called "better" way of life, our particularly destructive penchant is on display everywhere in the form of advertising saturation (another huge source of waste) by multinationals for every kind of product imaginable. Yet the heavily packaged electronics, single-use conveniences, toys, and other material goods used to obliquely express status carry a hefty price tag, both for the planet and its people.

In many developing countries people live in slum-like conditions where trash is deposited in makeshift dumps, along roads, and in gutters. Ride a bus and you see folks heave everything out the window as if it were... well, 1950s Canada. Drainage ditches and canals are so filled with trash it often stops water moving; in Bangladesh, monsoon flooding that killed thousands was on more than one occasion blamed on plastic bags blocking ditches. In such countries, less than 50 per cent of all waste in urban areas is collected and disposed of, compared to the West's rate of more than 95 per cent. But lest we feel smug, that waste doesn't disappear — it's merely shifted out of sight into landfills, some to languish forever.

In developing nations, scavenging the waste stream is a several billion dollar USD activity that provides income to over 15 million people — some one per cent of the urban population in such places. While waste picking has a role as part of sustainable development (metals have been recycled for at least 5,000 years), industrialization, urbanization, consumerism, and, in particular, plastics, present challenges.

Eight million tons of plastic waste enters the world's oceans each year, and China — the world's largest waste generator, surpassing the U.S. — produces fully a third of it. In 2012, the U.S. produced 32 million tons of plastic waste while only recycling about nine per cent. In this respect, bottled water is particularly villainous: Americans discard half a billion plastic water bottles a week, and in developing countries, water companies have encouraged abandonment of larger-scale clean-water efforts in favour of wholly unsustainable bottled water delivery.

So pervasive is the plastic-bag problem that they've been banned in many developing nations, many of which have nascent efforts to set up plastic-bag-free zones and have plastic-bag-free days at grocery stores. Compare this to Whistler's lame, years-long discussion about the topic. Thus the fact remains: waste in the developing world is a problem we have saddled them with. Leading by our own poor example, we provide products but no tools in the form of packaging regulations or an ethos to obviate the waste generated either in production or use. We preach the importance of clean water, teach people how to dig proper wells, desalinate and decontaminate. But we don't show them how to keep their water clean — because we can barely do it ourselves.