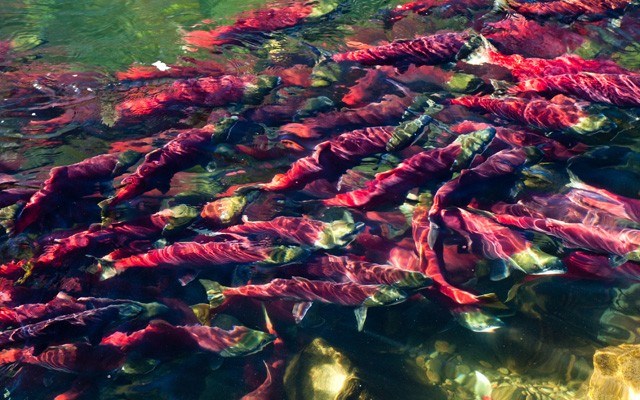 Salmon habitat in the Squamish area is getting a major boost in the form of restoration funding from the Fish & Wildlife Compensation Program (FWCP).

The FWCP announced roughly $150,000 in funding last week for two fish conservation projects on the upper Squamish River and the Dave Marshall Salmon Reserve. The work, which will help create or improve spawning, rearing and over-wintering habitats for Chum, Chinook, Coho, Steelhead and other salmon species, will be carried out by the Squamish River Watershed Society.

"There's an opportunity to improve salmon habitat, and the Squamish River Watershed Society has done an excellent job at that, and we'd just like to contribute to good, honest, sound on-the-ground projects," said FWCP coastal region manager Trevor Oussoren.

A partnership between BC Hydro, the B.C. government, Fisheries and Oceans Canada (DFO) and other stakeholders, the FWCP aims to conserve and enhance fish and wildlife impacted by BC Hydro dams — in this case, the Daisy Lake reservoir just south of Whistler.

"The Daisy Lake reservoir is an important facility, but obviously it has huge impacts on the ecosystem and the fisheries, so having the program in place at FWCP, and prior to that the Bridge Coastal program, over the years it has really helped to review some of the impacts to fisheries," explained Edith Tobe, executive director of the Squamish River Watershed Society. "It's important for industrial and resource user groups to provide those environmental measures to balance the impacts. You really can't have one without the other, and hopefully in the future we'll get more incentives and keep our salmon healthy."

The restoration work comes at a time when local anglers and public stakeholders have warned of near-historic lows in salmon returns to the Squamish River system.

"We're probably going to have our worst runs ever on record (this year), and a lot of that has to do with ocean survival and the lack of any habitat protection under the new federal fisheries law that Stephen Harper implemented in 2012," Tobe said, referring to the former prime minister's gutting of the Fisheries Act, a move that severely weakened environmental laws protecting sensitive fish and wildlife habitat. A March 2016 letter to then-Fisheries Minister Hunter Tootoo signed by nearly 50 conservation groups, First Nations and environmental scientists called for an immediate repeal of the changes to the act made under the former Conservative government.

Those changes also resulted in a significant shortage in funding for scientific research into fish populations across the country, something Harper critics claim has led to mismanagement of fisheries at the DFO.

The Squamish River Watershed Society has also been granted funding by the Pacific Salmon Foundation to research out-migration patterns of Chinook into Howe Sound, and Tobe said the work has exposed the gap in scientific knowledge at play.

"What we're learning is how much we don't know, in a nutshell," she said. "A lack of scientific know-how really limits the ability for managers to make decisions on how much a species should be a part of a fisheries in any given recreational, aboriginal and commercial year. When you follow the trail of how the decisions are being made — and it's no fault of the amazing staff at DFO that make these decisions — they're based on very outdated science and very limited data."