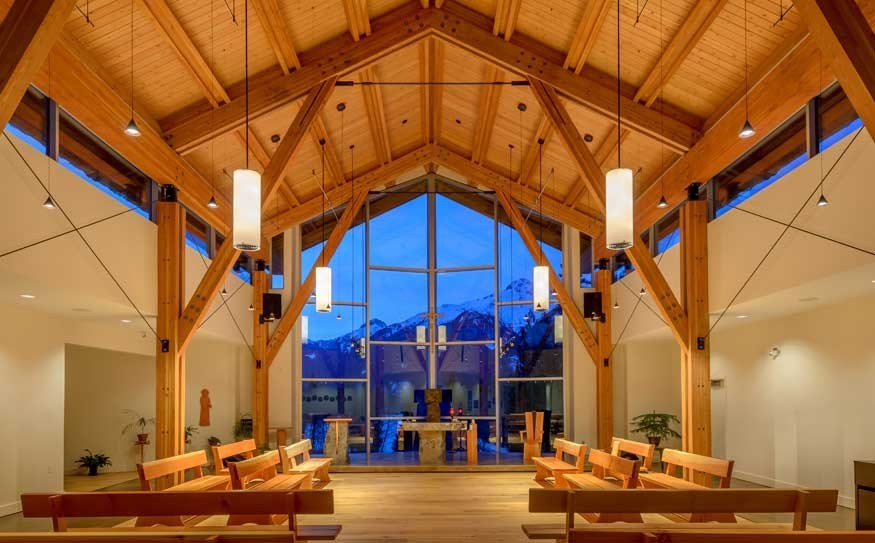 A Sea to Sky architectural company has been honoured by the Wood Design Awards BC for its work on a remote spiritual project in the Upper Squamish Valley.

At the annual Wood Design Awards aka architecture + design inc. was given the Interior Beauty Design award for the company's work on the Queen of Peace Monastery.

Andreas Kaminski and Jayne Song of aka architecture + design worked for two and a half years on the project with the Catholic nuns who commissioned the monastery. Song said she submitted the company's work for the awards contest and attended the award evening after they learned their company was named an award finalist.

"Once we got there all of the nominated projects are put on display and we had a tour around," said Song of the award evening. "It was the first time we got to see all of the projects that were in the competition and we pretty much assumed we wouldn't win anything."

She said the number of high quality projects on display was amazing.

"It was a very suspenseful evening," she said. "We were actually really surprised when they announced us as a winner in one of those categories."

The monastery is 2,200 square metres (24,000 square feet) and the building includes everything needed to lead a monastic life from a large chapel to bedrooms, studio space, administration space and other living spaces.

Song said her company provided all the architectural services for the project.

"We really tried to simplify it by separating it into different zones," said Song.

The most dramatic zone is the chapel portion of the building with its massive glass front overlooking the lush Squamish Valley.

"It is a complicated program but we tried to make the building appear very simple," said the architect.

The firm's owners knew some people who were helping the sisters and Song said a meeting was set up between Kaminski, Song and the nuns. From that initial meeting Song said things came together easily.

"The sisters had a very clear idea of the type of building they were looking for and had some pretty extensive descriptions of the type of spaces and the things that they needed so we reviewed their wish list and we described it back to them in our own architectural terms. We realized that we were on the same page."

The Solemn Dedication of the chapel was held in August at the new building set on a hill against a backdrop of evergreen trees. The building is a place of prayer and silence, home for up to 20 nuns along with 10 guests and a priest in residence.