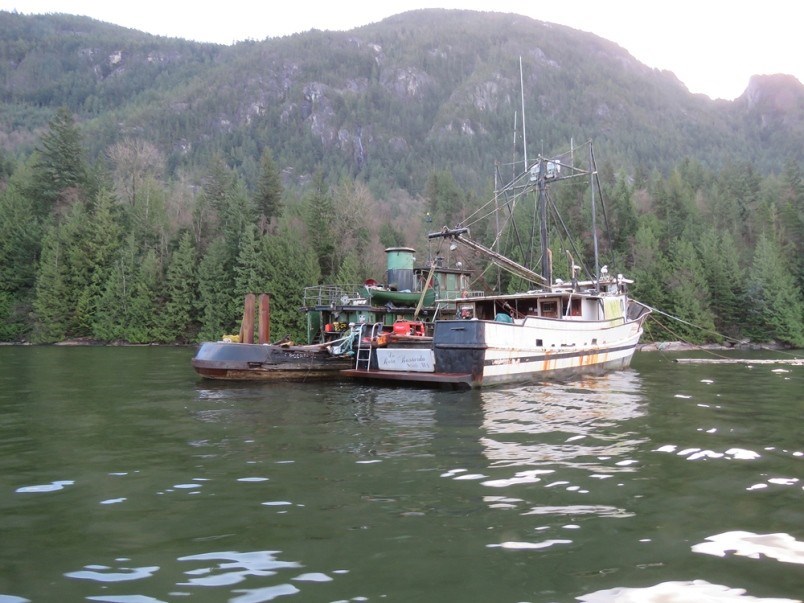 The Coast Guard is scrambling to contain a fuel spill in Darrell Bay after last week's windstorm wreaked havoc on some of the aging vessels moored in the area.

Authorities and a local conservationist say that the cause is a large tugboat that sank 100 feet underwater after being buffeted by gales reaching up to 111 kilometres per hour.

Known as the J.S. Polhemus, the 79-foot vessel is being blamed for an upswell of hydrocarbons — a compound found in gas and fuel — in the area.

Coast Guard spokesperson Kiri Westnedge said that a fly-over showed that sheening was occurring on the water, and a containment boom was set up in an effort to contain the leak.

Video footage taken by local conservationist John Buchanan shows the Polhemus down on the floor of Howe Sound.

"Is there anything out there in our regulations that can prevent [this]?" said Buchanan, referring to dilapidated vessels being kept indefinitely on Howe Sound.

"How much money are you and I, as taxpayers, on the hook for right now?"

He said there are tangled ropes and lines everywhere, and he fears that marine life could get entangled in the mess.

"What I am worried about is whales getting caught up in these lines."

Other boats sustained damage as a result of the storm.

A former fishing vessel known as the Zena was partially submerged after the winds pushed it onto the rocks.

The storm, by Buchanan's account, also caused a 26-foot sailboat to sink about 20 feet.

One vessel, La Rata Bastarda, appears to be sound condition.

Amidst news of the fuel leak, some locals directed criticism towards Steen Larsen, whom many believe to be responsible for the vessels.

Larsen told The Chief that he doesn't own the Polhemus. Rather, he said a friend from the U.S. left the vessel in the area. That person promised to take the boat back, but that hasn't happened yet, Larsen said.

Larsen said that months ago, the Coast Guard pumped diesel and oil out of the vessel. He said the leak might be from leftovers in the engine.

When asked about Larsen's account, the Coast Guard said it took necessary measures to prevent marine pollution from the vessel in 2017, including the removal of a significant amount of oil from the vessel's bilge.

"At that time, the vessel was assessed as being no longer a risk to pollute," wrote Westnedge, the agency spokesperson, in an email.

"Since 2017, the vessel appears to have been relocated to an unsheltered mooring and oil may have been added into the vessel. Since the sinking, the owner has not come forward to raise the vessel or prevent pollution. The Canadian Coast Guard continues to be on scene to prevent any pollution, and will be contracting divers to further assess the wreck."

The Zena, the boat that wound up partially submerged, is also a friend's property, according to Larsen.

With respect to the sailboat, Larsen confirmed that he was the owner, but he did not say that it sank. Rather, he said it had a puncture and was tied to the dock.

"It'll be craned out here before New Year's," he said. "We've already made arrangements."

Larsen added that La Rata Bastarda is also his vessel, and said the boat is in sound condition and still functions.

He also said that storm has caused him to reconsider whether he'd take care of others' vessels.

"After this one, I had to think long and hard about helping people that can't be bothered," said Larsen. "So that avenue has closed now. I will only be looking after my boats. Nobody else's. Period."

In addition to removing the sailboat, he said he'll be bringing one of his large vessels from the U.S. to help remove the Zena, which will happen in about a month.

"I will be dealing with the vessels that are in question," said Larsen. "As far as the La Rata is concerned, then that will be moved when the correct time comes."

"I'm just going to clean up my mess, and we'll carry on from there," he said.