Backcountry at the breaking point, says one enthusiast

Day use, sanitation and parking all under review
Sep 28, 2016 6:00 PM By: Pique Newsmagazine Staff 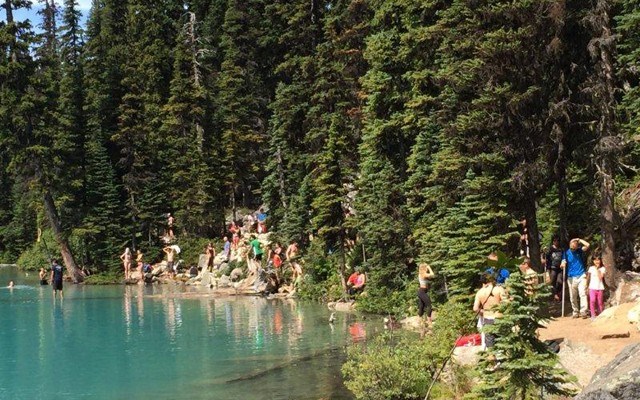 crowd sourcing Ariela Friedmann, who frequently hikes in the Sea to Sky corridor, said there are so many users in places such as Joffre Lakes, pictured here, that parking, sanitation and garbage have become serious issues. PHOTO by ariela friedmann

BC Parks has acknowledged that summer park and trail use has ramped up in the last few summers, but one backcountry enthusiast said there needs to be more funding for upkeep and maintenance in the Sea to Sky corridor.

Ariela Friedmann frequently ventures into the backcountry in the Lower Mainland and near Whistler, but said B.C.'s trademark vistas are under threat.

Friedmann recently hiked in Joffre Lakes and was appalled by not only the volume of users, but by the state of the park.

"I was shocked," said Friedmann. "What had usually been a four-hour hike — pretty challenging, fun, a few uphill scrambles along a couple of boulder fields — is completely gone. It's been bulldozed — it's two hours with a backpack to go from the parking lot to the end of the third lake – it's a walk. People were there in flip-flops."

But the trail upgrade pales in comparison to the garbage, parking problems and sanitation issues.

"You get to the end of Joffre and there's one pit toilet for all the campers and all the day users. I would say there is the potential for 500 people a day using that toilet. It was disgusting," she said.

"People come here from all over the world to enjoy the mountains. This is prime tourist attraction," said Friedmann. "The government has these ads promoting supernatural B.C., well, that's not going to be the truth."

Friedmann suggested a backcountry reservation system, permits for parking, and day-use permits to help curb the crowds. She added that the government's recent improvements — $60 million in total over five years for facilities and to target increased tourism — is not nearly enough.

"We have to make our trails sustainable, make them stewarded so future generations can use our lands," she said.

A Ministry of Environment spokesman emailed a response in light of these concerns, and acknowledged that the significant growth in visits in the Sea to Sky corridor is under review.

Specifically for Joffre Lakes, the ministry said: "BC Parks has increased staff and contractor time to maintain high standards of garbage removal and washroom cleanliness. BC Parks is also exploring options for potential improvement, due to the high costs related to the remoteness of the area."

Whether any changes will be made in time for summer 2017, the ministry said: "BC Parks is working closely with the Ministry of Transportation and Infrastructure on illegal parking issues, including signage and towing. The Discover Camping reservation system is reviewed every year. Further improvements to ensure fairness for campers using the system are being considered for the 2017 season, with any changes being announced later this year."

The topic recently was raised by Village of Pemberton (VOP) council, with similar concerns voiced about overcrowding, illegal parking and garbage overflow.

Friedmann said concerned citizens should write to the ministry to voice concerns, and join an online petition at mountainclubs.org to urge government to increase funding for B.C. parks.