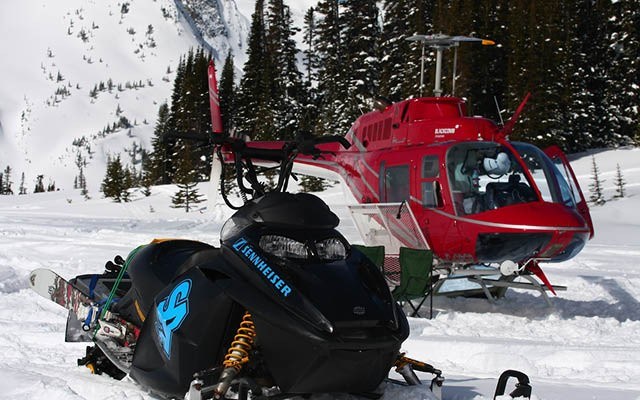 fun on film Adventure seekers in Bralorne use a variety of vehicles to capture backcountry footage for use in a short film competition during the annual Sennheiser Backcountry Picnic. PHOTO SUBMITTED BY STUART WILLIAMS

There are two events every year when Bralorne, B.C. experiences a rapid influx of people. One is the Bralorne Ball Tournament in July, where 200 people from eight local and regional baseball teams battle it out and camp around the ball diamond for a weekend.

The other is the Sennheiser Backcountry Picnic.

Returning to Bralorne this weekend for its third year, the Backcountry Picnic vehemently abides by its Three Musketeer-like motto, "all for fun and fun for all." It's a sort of hybrid competition, borrowing from traditional judged freeride comps and short form film festivals. Crews head out to designated backcountry areas on snowmobile, gather freeride footage over the weekend then spend two weeks editing a video to post online. The public then votes for it's favourite edit with awards taking place in Whistler during the World Ski and Snowboard Festival.

The picnic does have two distinct barriers to entry; you have to own or have access to a snowmobile, and getting to the event is a two-and-a-half hour drive north of Pemberton via Lillooet. Consequently the picnic only sees about 50 entrants every year, but that's the way the organizers like it.

"As far as taking a huge number of people up into (backcountry), to be perfectly honest, it doesn't really interest us," said Paget Williams of Montreal-based Reel Events and Management.

"It would be nice to have it a little bit bigger, but as soon as it gets out of hand, people start coming in that shouldn't necessarily be there. It's a delicate area that has to be respected in every way, shape and form."

Williams stresses that the picnic is not a free-for-all with dozens of sleds taking off to highmark alpine bowls. There are rules that contestants have to abide by to keep them clear of avalanche and weather hazards.

"We're not interested in being the next headline for a B.C. tragedy. We're here for this event to have longevity. As soon as we start reaching out to the entire sledding community, that's inviting a whole bunch of stuff that's out of our realm of control. The awareness of safety and respect is a common thought among both organizers and riders."

Last year some inclement weather meant the organizers had to call a weather day and restrict all contestants to filming in the town of Bralorne. Crews resorted to jumping off roofs, building jumps in front of houses and utilizing every bit of space of the ball diamond for general tomfoolery. Such footage featured heavily in the 2013 winning video from Team Giver of UBC Freeride, as well as third the place entry from Tavis "Meatsaw" Menzies.

"The reason it's the Sennheiser Backcountry Picnic, is because if the weather's bad and everything is really horrible, it might just be a picnic," laughed Williams.

While the event sees a relatively small number of people compared to other festivals, the online presence of the videos puts Bralorne on the world stage. Google analytics data from the event website last year revealed that votes were coming from all over Europe, Japan, Australia, New Zealand, as well as North America.

"We're in a position where we give people an opportunity to show what they can do, we give them the forum and the online public becomes the critic," said Williams.

"Just because we're in Bralorne and we're an 'extreme' style event, doesn't mean it's limited to people with that sort of lifestyle. People who sit in their office, or go to school in Chicago or L.A. or Germany, can all know what's going on in Bralorne."

The influx of 50 contestants together with a dozen or so event staff and their entourages also means that business will be booming in Bralorne. The Mineshaft Pub is the designated — and only — bar for daily après celebrations with performances from DJ Evil E and Jah Cutta. Accommodations are limited with only 10 motel rooms, so people usually end up staying in locals' houses or camping. Many locals were taken by surprise during the first picnic in 2012, but the annual event has now been embraced by the community.

"The first year that we did it, people were a little confused as to what the hell we were doing up there, wondering why would we care to be in Bralorne," says Williams.

"A few of the mining locals came in (to the Mineshaft Pub) on the first night, and wondered what was going on, but by the end of the weekend they came up to us and thanked us for bringing this event to town."

The Sennheiser Backcountry Picnic welcome party is tonight at the Mineshaft Pub in Bralorne with backcountry days scheduled to Sunday. Winning videos will be awarded at Merlins on April 16 featuring performances from Jah Cutta and Los Kung Fu Monkeys from Tijuana, Mexico.

For more information go to www.sennheiserbackcountrypicnic.com.