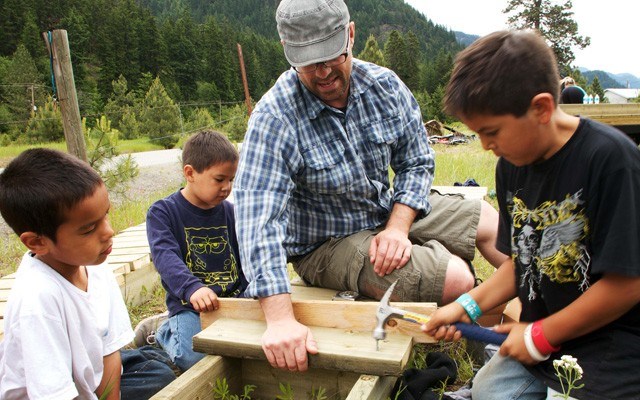 In 2011, community planner Patrick Lucas was working with the Boothroyd Indian Band in the Fraser Valley, about 45 minutes north of Hope. The local elders, leadership and community members had expressed concern about the growing prevalence of drugs and alcohol, as well as inactive lifestyles among the youth. But the community had also noticed one thing that managed to get kids outside — BMX and mountain biking.

"They were riding their bikes all over the community, (the residents) couldn't leave a pile of dirt without these kids building some crazy-looking jump out of it," said Lucas, recalling his conversations with the Boothroyd Indian Band members.

"(The kids) were stealing wood from people's fences to build features and do tricks on. At one point they were actually digging dirt away from the fire hydrant because it was the softest dirt they could find. The residents wanted them to keep doing it, but without (the destruction of property). That's when they asked me to help."

Lucas was well versed in starting community programs and took on the project by volunteering his spare time around his community planning work. After securing grants from Mountain Equipment Co-op and the Vancouver Foundation, Lucas reached out to Sprockids Founder Doug Detwiller to spearhead a similar youth mountain bike program aimed specifically at First Nations communities.

That cooperation, together with involvement of around a dozen youth and their parents over two days, saw a small bike park constructed in Boothroyd, which included a pumptrack, a skills learning area and a bike jump. Some additional bikes and tools were also brought in and Detwiller conducted a handful of riding clinics.

The kids loved it.

In an email to Lucas 12-year-old Jerome Campbell said: "We got to see pictures of parks from all over and then we picked what we wanted. That was cool, picking what we wanted and then helping to build the park. Now we show all our friends when they come to our home."

That was the first project of the Aboriginal Youth Mountain Bike Program (AYMBP).

"We had so much fun we decided we could keep doing it, maybe there were more communities that would be interested," said Lucas.

"Since then it's really taken off. We've worked with the (Tahltan Band) in Northern B.C. and Beecher Bay (Sc'ianew) on Vancouver Island. This summer we're also doing a bunch of new communities including the Williams Lake Band and Soda Creek where we'll be training youth to build trails."

After the 2014 Supreme Court ruling for the Tsilhqot'in Nation, many mountain bike clubs in B.C. are realizing that they will likely require permission from local First Nations in order expand and improve their trail networks. The AYMBP bridges the gap between the two groups by involving First Nations youth in trail building projects and encouraging more kids to get out and reconnect with the land. Mountain biking has seen strong growth in B.C. in recent years and many First Nations communities have expressed interest in growing activity-based tourism, but Lucas said it's difficult to kick start mountain-bike tourism unless there's enough people riding locally already.

"What happened with Boothroyd, was they said 'our kids are doing it,'" said Lucas. "When we started reaching out to some of these other communities we often find that there's a lot of kids who have these really shitty bikes who are always out riding and doing stuff."

An example Lucas points to is the Lil'wat Nation north of Pemberton, where a program is yet to take off, but kids are out riding and building their own bike trails without any outside assistance.

"I asked them, 'where are you riding?'" said Lucas of his visit to the youth of Lil'wat Nation.

"They took me out into the bush to this ravine and they showed me where they had built 500 metres of all their own jumps and features, which they had built over about three years. All they had was a broken wheel barrow and a broken shovel."

In order to make the AYMBP projects sustainable, Lucas and Detwiller will seek out community "champions" — preferably mountain bikers — who can be trained to conduct their own clinics and be responsible for coordinating maintenance and upkeep of trails and features. There also needs to be enough interested kids in the community to make it viable.

Detwiller has grown Sprockids from a grassroots organization on B.C.'s Sunshine Coast to now having a presence in more than 20 countries over the course of 25 years. He said that the success of these local programs hinges on youth taking an ownership of the trails and by association, the land.

"We see mountain biking as a way of getting young people connected to their land and their traditions, especially in rural communities," he said.

"If we want to keep the beauty of B.C. we can't just say we're going to preserve it and make it a park. We've got to get today's young people involved by building trails and falling in love with (the land), so they want to see it continue into the future."

The AYMBP is currently conducting a crowd funding campaign on Indiegogo to raise money for its various projects in B.C. For more info, visit aymbp.ca.