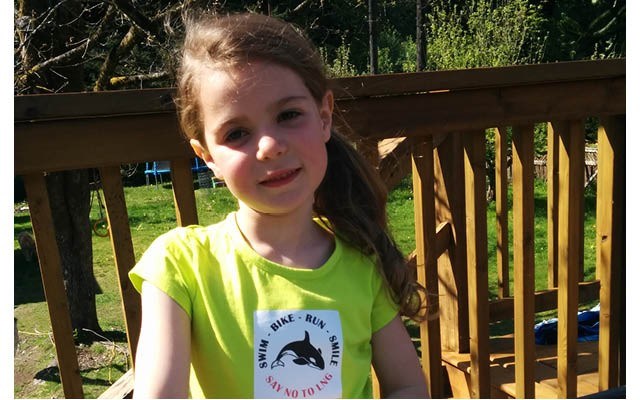 Kati Palethorpe was excited to register her eight-year-old daughter, Frieda, into the Squamish Youth Triathlon until she learned Woodfibre LNG was one of the event sponsors.

Palethorpe put a halt to the registration process, talked to her daughter about the liquefied natural gas (LNG) issue and together they agreed that instead of doing the event in Squamish Frieda would register for a biking event on the North Shore instead.

"She's fully aware and understood. She didn't want it either," said Palethorpe of the family decision to opt out of the youth triathlon, which sold all the available spots in the race on Sunday, May 11. "She said she wanted to do something like this so we found the other event, which was great."

According to Palethorpe, other parents who registered their kids for the triathlon had no idea the company behind the gas export proposal, just south of Squamish, was a sponsor.

Instead of pulling out of the event, those parents decided to quietly protest the company's connection to the triathlon by dressing their kids in protest shirts. The shirts featured a logo with an orca in the centre surrounded by the words, "swim, bike run, smile — say no to LNG."

Palethorpe said up to a dozen kids wore protest shirts in the triathlon.

Woodfibre LNG, a low-level sponsor of the race for kids between the ages of three and 15, is putting together detailed plans for the B.C. environmental assessment office. The plans will outline how the former pulp mill site on the western shore of Howe Sound will be transformed into a gas plant.

"We need to listen to our kids because it's their future," said Palethorpe. "I've lived half my life, but they have their lives ahead of them."

"This is a great event, made possible through the countless hours put in by dedicated volunteers," said Ngo. "Like all volunteers, their efforts are invaluable and deserve to be acknowledged and commended."

Meanwhile, Premier Christy Clark and Imelda Tanoto of Woodfibre LNG have signed a letter of intent. The letter commits the pair to grow LNG in B.C.

The letter was signed in Singapore as part of Clark's recent international trade mission.

"Woodfibre LNG is moving forward with their proposal because they understand the scope of the opportunity in British Columbia," Clark said through a news release. "We are building a competitive new export industry in our province — one that will create unprecedented prosperity and jobs for decades."

Tanoto, the daughter of Indonesian businessman Sukanto Tanoto, is the lead director with Woodfibre LNG.

"Woodfibre LNG is advancing rapidly towards reaching a final decision on the construction of the Woodfibre LNG project," said Tanoto through the same news release. "Reaching this agreement with Premier Christy Clark is a strong signal to our company that the Government of British Columbia is committed to the success and viability of the LNG sector."

Clark and Tanoto have agreed to assign senior executives to negotiate the agreement by Nov. 30.

Woodfibre LNG wants to be operational early in 2017.

The proposed Woodfibre LNG plant on Howe Sound so far has a National Energy Board license to export about 2.1 million tonnes of LNG a year. The company also has the municipal zoning needed.

Fortis BC is working toward getting approval to expand its natural gas delivery capacity to Woodfibre. The gas company is going through an environmental assessment office process to review a proposed expansion of the pipeline between Woodfibre and Coquitlam.

Woodfibre LNG announced this week it plans to power its plant with electric drives.

Eoin Finn, of the protest group My Sea to Sky, said the exported gas will push six million tonnes of carbon dioxide into the air in China when the gas is burned.