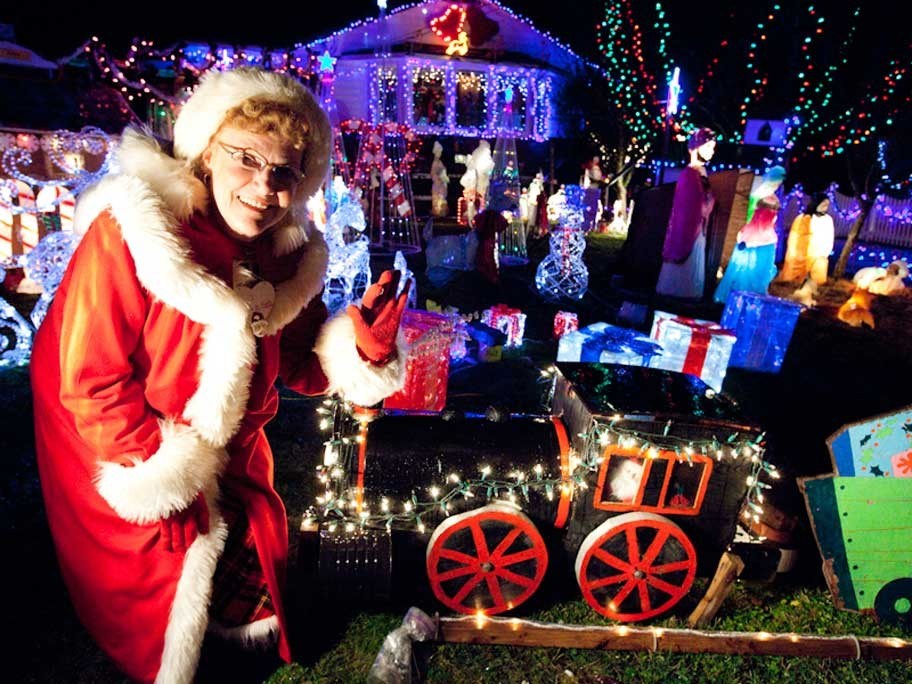 First there are the wide-eyed gasps, which give way to soft smiles, and then a subliminal happiness takes over.

That's often the cycle of expressions that run on the faces of those who come to see the spectacular display of Christmas lights at the Garden Place, home of Bud and Marion Payette in Valleycliffe.

Car after car sweep into the cul-de-sac, the windows are rolled down, the ear-splitting smiles obvious.

Christmas lights are everywhere in Squamish, but nowhere do they exude such fervour, such refreshed spiritedness, as they do here in the Squamish home of the Payettes.

Up front, a nativity scene is being played out, close to it is a bear skiing, to its right a snowman waves to guests, a few metres away a Ferris wheel festooned with toys spins gaily.

Reindeers prance about, church bells ring, carolers sing, and penguins enjoy themselves on a teeter-totter in a quiet corner.

Above all this Santa stands tall, waiting for you, smiling, waving.

In this cornucopia of light, it's easy to forget that this spirit-warming wonderland is the Payette front yard.

But forget that and remember this: If some Christmas Cheer is what you need, a look at this place will give you that.

For these lights have dissipated the darkness and spread the Christmas cheer for the past 25 years, although it all started on a note of tragedy.

When their 15-month-old granddaughter, Joanna Ray, died 25 years ago, Marion and Bud wanted to push back some of the sadness that had enveloped the family.

Bud carved out a Santa from plywood, and put a big star next to it. A young girl from a neighbourhood noticed it and came to play. They heard her laugh and the next year they put out more lights and more kids came, and their home was filled with laughter. And so started what has become a Christmas tradition.

Every year, the Payette home was decorated in such spectacular fashion, and every year, from Dec.22 to Dec.24, they opened their home to kids who come to meet Santa.

More than 400 candy canes await the many kids that come every year to see Santa in their garage.

"I love talking to kids," said Bud, who gets to tell the kids about the North Pole on those three days.

Even though the Christmas lights are on for only a month, preparations to put them on start as early as October.

Their Christmas hydro bill is often three times that of any other month, and sometimes they are too tired to even talk on Christmas, but still they say they wouldn't miss it for the world.

There is only one reward for them in it: making their community happy. "It's the only reason we do it," said Marion.

As she came out to check on the displays, a car came and a couple rolled down the windows.

They looked at the house in disbelief, a smile spreading across their faces.

"Is this your house," the woman oohed.

"This is the second time we have come here. Our neighbours told us to see it," she said.

By this time, their kids on the backseat are straining to see the decorations.

Marion peers in the car and tells the couple's son. "There will be a Santa here...You should come."