Coalition highlights importance of adventure tourism to rural B.C. as it heads into 2019 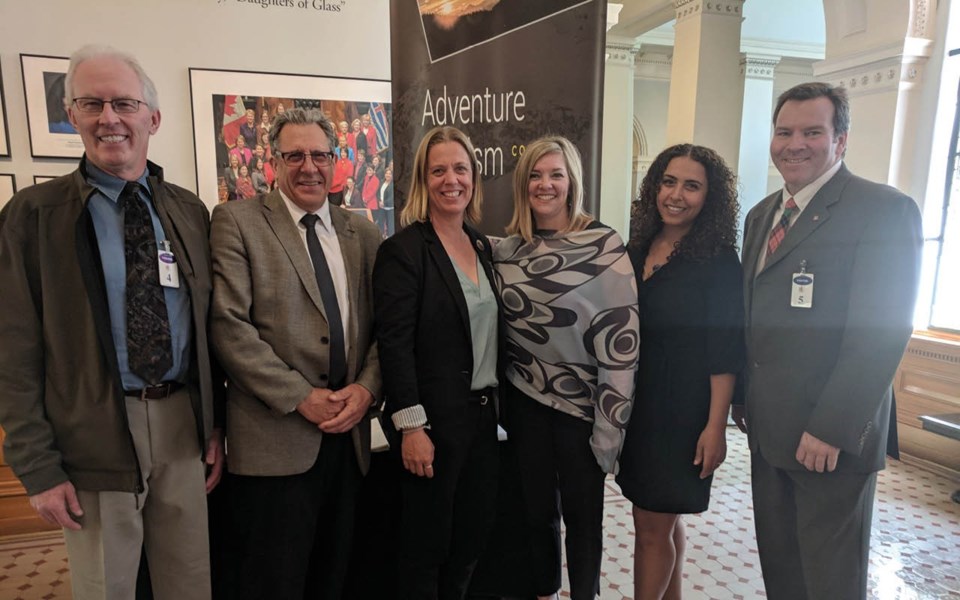 Meet and greet Pictured left to right during national tourism week in Victoria: Brad Harrison (chair of the ATC); Scott Benton of the Wilderness Tourism Association of BC; Kathy MacRae of the Commercial Bear Viewing Association; Tracy Eyssens and Mary Gerges of Indigenous Tourism BC; and Christopher Nicolson of Canada West Ski Areas Association. Photo submitted

Though still in its infancy, the Adventure Tourism Coalition (ATC) is already recognized as a major stakeholder in B.C.'s robust tourism industry. However the head of the organization said there is still work to be done to ensure that the economic importance of the sector is fully recognized.

Launched in April 2016 to give a wide array of industry stakeholders a unified voice with government, the ATC represents 19 adventure-tourism associations, including Helicat Canada, Mountain Biking BC, the Wilderness Tourism Association of BC, and the Canada West Ski Area Association.

In its meeting with policy makers, the coalition has highlighted the importance of the adventure-tourism sector to rural B.C., where unemployment rates remain stubbornly high, said ATC chair and Backcountry Lodges of BC Association executive director Brad Harrison.

"We're well positioned to try to help those economies adjust," said Harrison. "As other industries decline in their significance, we can step up and diversify the economy in those traditionally one-industry towns."

Harrison said that on balance, the province appears to be paying closer attention to the specific needs of adventure-tourism operators, and that the ATC is being included in key discussions regarding planning, stewardship and conservation. "The Adventure Tourism Coalition is pretty much always at the table now," said Harrison.

He noted that in June, ATC officials met with provincial officials in Victoria during national tourism week, attending a meeting of the B.C. legislature and setting up a table in the Hall of Honour alongside other industry heavyweights.

"The other players there were long established," said Harrison, adding that the Tourism Industry Association of BC (TIABC), Indigenous Tourism BC, and Destination BC were all represented. "For us, just to be included in that, was huge ... It shows that we can be a partner and help make B.C. better for everybody."

Harrison said that strengthening the voice of the adventure sector in the halls of the Ministry of Forests, Lands, Natural Resource Operations and Rural Development remains a key priority for the ATC. Many adventure-tourism operations have land tenure areas that are shared by forestry companies, arrangements that can sometimes lead to conflict.

"In some parts of B.C., trees standing are more valuable, economically and socially, to B.C. and its residents than they are harvested," said Harrison. "But in other parts of B.C., stand-up timber is worth more harvested."

That said, Harrison acknowledged that there is a reason that the forestry industry carries so much weight with government, adding that, "They've had a long, long history of forestry being the big dog."

A recent incident involving a forestry company and cat-skiing operation in the East Kootenays illustrates the importance of clear communication between stakeholders, he explained.

In March, a forestry company, which shares a land-tenure area with the operator, plowed a road that a cat-skiing operation used to access the area, causing its clients to be stranded.

"All the skiers got down to where the cat pick-up was and had to walk, because now the cat couldn't get down the road," explained Harrison.

According to Walt Judas—chief operating officer of the TIABC—the ATC is doing a good job highlighting the importance of the adventure-tourism sector.

As a sector, it has potential to grow, and that in order to nurture growth, the province must adopt policy and legislation that recognizes its importance, he said.

"The sector employs a lot of people, particularly in rural British Columbia, but it has so much more potential to grow," said Judas. "It's being stymied by tenure and land-use (legislation)."

Judas added that under the current model, the sector is getting short shrift, and some natural-resource sectors, "seem to be able to do a lot on the land, or come in and take over a parcel of land or an area that has typically been part of the adventure-tourism sector."

The tenure and land-use issues are causing B.C. to lose business to other regions, said Judas. "Unless we resolve some of the other issues, that will continue to happen, and we will continue to lose market share," he concluded.