Up to 30 per cent of Metro Vancouver and Sea to Sky residents would seriously consider buying or renting a home at the proposed oceanfront village of South Britannia on Howe Sound.
Aug 21, 2013 9:00 PM By: Cathryn Atkinson 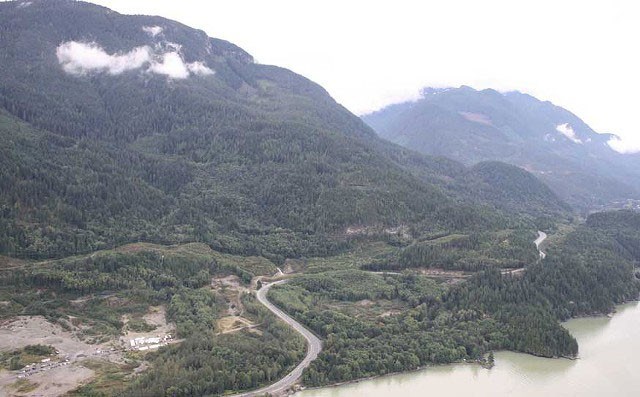 Site of the proposed oceanfront village of South Britannia on Howe Sound.

Up to 30 per cent of Metro Vancouver and Sea to Sky residents would seriously consider buying or renting a home at the proposed oceanfront village of South Britannia on Howe Sound.

This is according to a survey carried out on behalf of South Britannia's proponents, the Taicheng Development Corporation, by the Mustel Group.

Two surveys were carried out, said the project's architect Ron Lea of Folio Architecture; the first was a random telephone survey of 500 Metro Vancouver residents and the other an online survey of 1,323 respondents in Metro Vancouver and the Sea to Sky region.

The survey also found that men are more attracted to the project than women, that affordability in the housing market outside of Vancouver made South Britannia, along with the small community and outdoor lifestyle, appealing.

The market research company carried out the survey in February and March this year, with Taicheng making it public this week.

Lea said in an interview that a "critical mass" of interest was now developing for South Britannia.

"The number of people surveyed was enough to give it statistical relevance," he said. "It's very positive news."

Taicheng, a Chinese company, purchased the 202-hectare site in 2012 for $30.5 million and has proposed the ambitious creation of a community and park on Minaty Bay. The company has built several similar communities in China, but South Britannia is its first major Canadian project.

Lea said Taicheng has held eight workshops with staff of the Squamish-Lillooet Regional District (SLRD) to discuss different aspects of the development, as well as making several presentations to the board, the last one in May.

Lea said it was a complex project and each evolution has improved it. The main issue, Lea said, was whether the proposed scale of the project conformed to the district's Regional Growth Strategy. Taicheng would not be making a presentation to board members but would be available to answer questions about the project.

There have been several sticking points for the board, which Lea said Taicheng has been attempting to address. These include whether the project conforms to the SLRD's regional growth strategy and how to make the project viable with its current regulations allowing for 1,000 property units.

"We've now gone through several evolutions of the project. One was going from the 3,000 units we were proposing to arrange for 2,500 to 3,000... this is what we needed to support a grocery store and a grocery story is a building block within the community," Lea said. "We also adjusted the mix, because the other question was if the number of apartments proposed, which was about 48 per cent, excessive. We reduced it down to as low as 33 per cent of apartments... but there are quite a variety of housing types within the project."

Taicheng has also shifted their plans on the development and use of Minaty Bay, Lea said.

"We had looked at blending Minaty Bay with the rest of the waterfront to make it all one park and there was resistance to that. We thought the best thing to do is give over the full 12-acres of Minaty Bay as a regional park and not have it perceived as stealing away Minaty Bay. We've also offered more parkland in exchange for the land on the top of the knoll in Minaty Bay Park where we would like to put a hotel."

All this, he said, would be considered in upcoming deliberations on South Britannia by the SLRD board at their next meeting on August 26. The agenda was not available at press time to confirm this or provide details.

There have been two other important developments for the project, Lea added. The first is that Taicheng purchased a 6.7-hectare lot from the adjacent Britannia Mine Museum in May.

"Buying it allows us to take the bottom of it and introduce a tra nsit hub, which is going to be a location close to the downtown core, which is a good addition and allows us to link to the Galileo Coffee shop and the heritage buildings that are part of Britannia," Lea said.

The second addition to the project is that Taicheng has received a support letter for the development of the waterfront from the Crown, which Lea said would be helpful for any upcoming first and second reading of the project.

"Taicheng has always had the point of view that the development of the waterfront should always be not just park in front of our property but also park in front of north Britannia (Beach), so the ability to have a full extent of waterfront park, including a walkway and number of amenities up to Britannia Creek, is a huge addition to the project," Lea said.

He said that Taicheng was excited by the Sea to Sky Gondola, now being built up the Highway 99 near Squamish, saying they have the ability to connect to trails now being built for the gondola project "at a higher level."

And Lea had no concerns about the proposed Liquid Natural Gas terminal across Howe Sound at Woodfibre: "In terms of preserving the view at South Britannia, it shouldn't cause any problems."