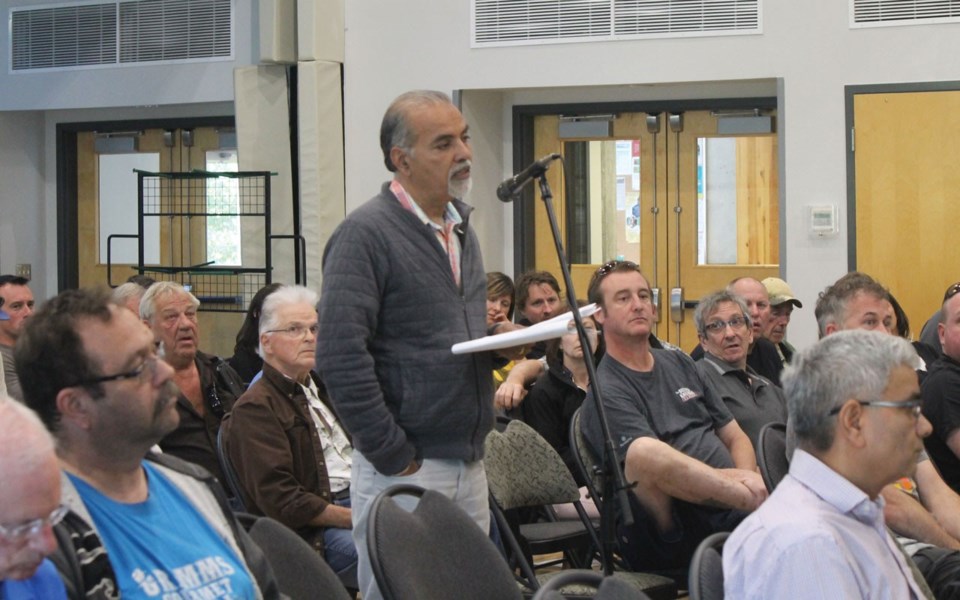 drive-thru Barj Dhahan says he should be allowed to build a drive-thru restaurant on a lot behind the Husky gas station. photo by joel barde

A businessman who owns a piece of vacant property behind the Pemberton Husky is calling out local government after learning that a new draft bylaw may quash his plans to build a drive-thru restaurant.

"It is zoned for a drive-thru," and the Village of Pemberton (VOP) planning staff has shown support for the concept, explained Barj Dhahan.

"Our proposed development is consistent with the zoning," he said.

The property was purchased in 2011with a drive-thru in mind, and restricting it at this stage in the game is unfair, said Dhahan.

"Why restrict one use only? Why not restrict a bunch of other usages as well?" he said.

Dhahan said that he and and his parteners have been working with VOP for years, trying to determine the right project for the property.

"It's putting a lot of pressure on us to submit our application before they make this change," he said.Under now MLA Jordan Sturdy's tenure as VOP mayor, the plan was to build a "tri-services building" to house RCMP, ambulance and fire services and drive-thru restaurant. Sturdy was first elected mayor in 2005 and served three terms.

"In the end, we didn't get much traction on that," recalled Dhahan. "One of the reasons was because the fire portion would have fallen on the Village in terms of costing, and they didn't have the resources at that time."

The newest plan for the property is a mixed-use project that would include two buildings with commercial and residential or rental uses as well as a drive-thru Tim Hortons. Dhahan said that he met with Village planning staff in August 2017 to review the proposal and received words of support.

"They were fully supportive of what we were proposing," said Dhahan. "They indicated they would be willing to support a development of that type, which would include a drive-thru restaurant and another one or two buildings."

Following the meeting, the proponents moved forward with a geotechnical survey of the property and refined their plans.

Then, just a couple days before the deadline for written submissions for the June 12 council meeting in which the draft bylaw received first and second readings, Dhahan said he was "surprised" to get an email from the Village.

"I got an email that there is a report going from the staff to the council around removing the drive-thru use," said Dhahan, who attended the June 26 public hearing on the draft bylaw.

"We're hoping that the changes are not going to be adopted," he said.

In a letter to council, two project proponents he is working with raised the point that if the bylaws are adopted, they will effectively create a de facto monopoly for McDonald's, which sits next to the Husky.

Drive-thru restaurants have been a contentious issue in Pemberton. In 2015, VOP council gave first and second reading to a bylaw amendment that would have banned them from the area where Dhahan's property sits.

But after vocal opposition from the business community, including Pemberton Valley Lodge owner-operator David MacKenzie, council decided to rescind the contentious zoning amendment in October 2015.

"It was a tough decision," said Mayor Mike Richman at the time. "We'd heard from some very vocal opinions at our public hearing, as well as feedback from our referral groups and individual constituents, so there was really a lot to consider."

This time around, there has not been the same outcry over the proposed no drive-thru rules and the Pemberton and District Chamber of Commerce has come out in favour of the restrictions, saying that it would be better if people get out of their cars and explore the community.

Dhahan says he understands that some people are opposed, and he respects that.

"Everybody is entitled to have their viewpoints, but the fact still remains, that some of the lands that are commercial lands along the highway currently allow for drive-thru restaurants," he said.

In an interview with Pique, Richman said that he empathizes with Dhahan. That said, he added it is important for municipalities to have discretion to make changes to their bylaws, to use them to reflect the changing values of their residents.

"When you look at zoning, it's something we amend and change periodically," said Richman. "You do it to update it and reflect the changes in your town and to reflect your official community plan."

For Dhahan, to change the rules at this point in the game feels unfair; especially given the extensive consultation he's had with Village staff.