Cat Lake littered with more beer cans than volunteers have ever seen
Aug 9, 2019 3:45 AM By: Keili Bartlett / Squamish Chief 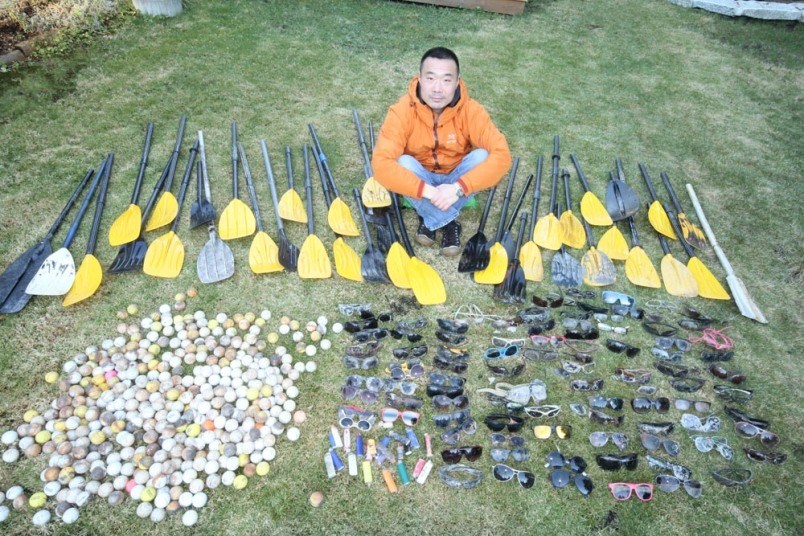 Before he's even in the water, Henry Wang points to the garbage—beer cans—sitting on the dock at Cat Lake. The slightest wind, he says into the camera, would tip them into the lake.

On July 29, Wang, a professional diver based in Vancouver, went to Cat Lake to retrieve someone's phone from its depths. He ended up picking up sunglasses, paddles and lighters, but there was more garbage than he could carry in one trip. In the video Wang shared, the beam of his light bounces off can after can.

The fact that there was some garbage was no surprise to Wang, who has been diving and cleaning Cat Lake for six years. In 2017, Divers for Cleaner Lakes and Oceans (DFCLO) removed 102.3 lbs of garbage from the lake — in one day. The volunteers' website says they've handled more than 27,845 lbs of garbage since they began in 2013.

The extent of the trash at the bottom of Cat, however, was a shock to Wang.

"I didn't expect to see that much of it," Wang told The Squamish Chief. "That's about as worse as I've ever seen it."

The online response to the video footage seesaws between thanks to the volunteers and outrage at the mess. Wang just started uploading videos of his dives. Previously, he shared photos of the garbage once they'd brought it to the surface. But bringing more people with him underwater, even if only virtually, gives a deeper perspective of the situation.

"It's hard to comprehend," Wang said. "I think when we do a video of the slough of garbage laying pretty much endless, I think it's way more impactful."

DCFLO partnered with BC Parks several years ago, and are invited to return to help with problematic lakes, those that see recurring or increasing garbage. The volunteers dive at lakes in the Fraser Valley, Sea to Sky Corridor and other areas in the province. In Squamish, Wang and his team of volunteers have cleaned Brohm Lake, Cat Lake, Alice Lake and Browning Lake.

Clean up efforts often fall on volunteers' shoulders because the commercial rate of the operation would be "astronomical," Wang said. The environmentally sensitive lakes can't be dredged, requiring experienced divers to access sometimes technical terrain. Since divers need to pick up one item at a time, then return to the surface each time, the process is time-consuming. The work isn't something recreational divers should attempt, Wang adds, narrowing the field of who is able to help.

The divers own the equipment, and Ocean Quest Dive Centre in Burnaby provides oxygen for the dives. Gear repair and other odds and ends are partially covered by fundraising efforts.

Wang said he hopes his videos will help raise awareness of the environmental issue. Charging people a fine when litter would be hard to enforce, he notes, and although there are trash and recycling bins near the entrance and exit of Cat Lake, not everyone is following the ‘pack in, pack out' advice.

"The reality is that when people are purposefully floating out to the middle of the lake and they're just dropping their cans and bottles over the side of their floaties, there's absolutely nothing they can do about it," he said.

"Whether it's accidentally or purposefully, it doesn't disappear. It's there, and it injures the ecosystem."

Wang plans on returning Sept. 20 to 22 and Oct. 4 to 6 to spend a few weekends cleaning Cat Lake and Alice Lake, an act that has become an annual — and necessary — tradition.

This article was originally published by The Squamish Chief on Aug. 8.