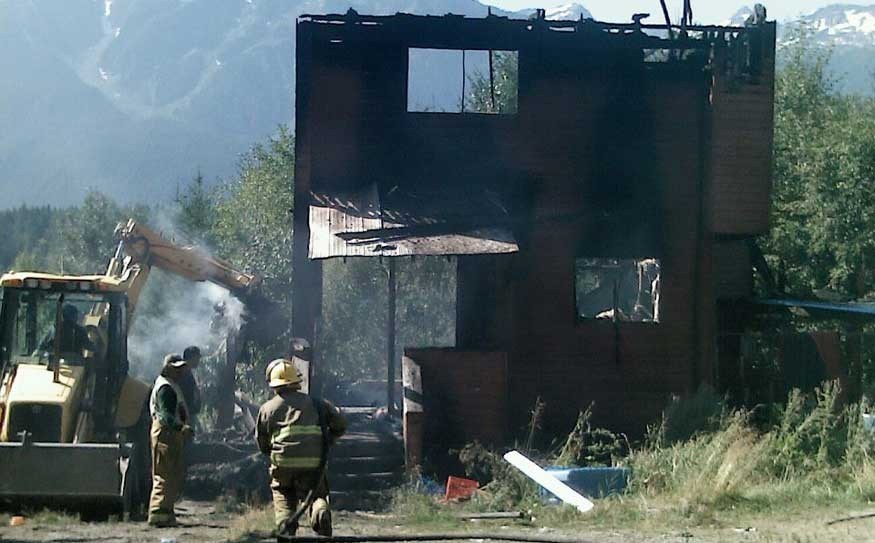 GUTTED This is all that remains standing of a Mount Currie duplex that caught fire in the early morning hours of Aug. 2. Photo by Amanda Peters

No one was injured in the fire, which gutted the two homes and destroyed the contents in both, including furniture, clothing and more irreplaceable things such as family mementoes.

Amanda Peters lived in one half of the property with her husband Billy, two daughters aged four and 13, and her brother and a cousin. The girls were at a sleepover and Peters decided to spend time with her husband at his work in Whistler as an overnight security guard, so no one was home at the time.

"The whole thing is gone. My daughters are hanging in (there) and asking questions," she said. "We lost everything, birth certificates, the TV, pictures, toys..."

A family of five lived in the other house. Peters said the fire started around 2:30 a.m. on Aug. 12.

"There was a girl home at the neighbours, she was screaming and somebody called 911," she said.

Pemberton Fire Rescue took the call. Peters said her brother Casey Gabriel, a volunteer fireman with PFR, had the heartbreaking call to fight the fire at his own home. The cause of the blaze is still under investigation.

Peters said they were currently staying with a family friend and two Bingo Nights had been planned at Mount Currie to raise money for them to replace some of their destroyed property. The other family, she said, were also staying with friends.

Peters said the band office has an insurance program, but had switched insurers on Aug. 1, so she did not know if and how they were covered. The house, she added, would be replaced.

She wanted to thank friends and neighbours who have given them clothes and other support.

"We're taken care of. Thanks to the community for pulling together in a time of need," Peters said.