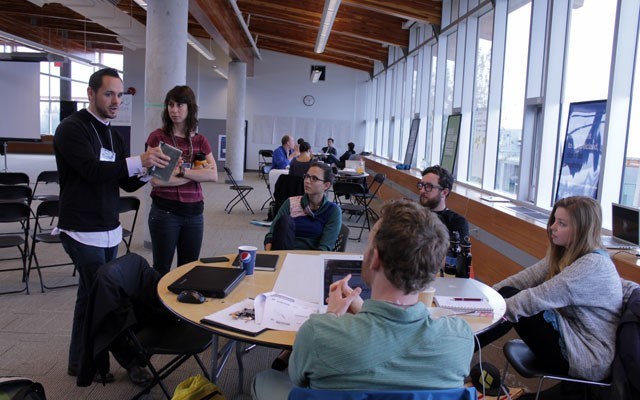 coaches' corner Business mentors Wes Baker and Melanie Richards, left, give their 'two cents' to the team-holidays-for-athletes group at the recent Startup weekend at Quest University. photo by drew copeland

Laptops, tablets, notebooks and cups of coffee cover tables where the aspiring entrepreneurs are hashing out their projects, creating businesses.

On the surrounding windows are lists, business plans and framed posters with quotes, "ideas are worthless until you get them out of your head and see what they can do," "move fast and break things," and "if you don't want to be criticized, never do anything."

Startup Weekend kicked off Oct. 23 and ran for 52 hours in the third floor of the University of Quest Library Building. The entrepreneurial oriented event sought to teach the basics of creating a business and to have viable products at the conclusion.

From the 13 ideas initially pitched, participants voted for six to be turned into projects and then formed teams around those concepts.

The teams were: little houses made from shipping containers, adventure holidays for athletes, social media consulting for businesses, a library for kids clothes that are grown out of before they're outworn, a large community recreation centre aimed at hosting training for Olympic athletes and a service to refill hygiene products from locally sourced businesses.

Coaches, or mentors, moved between the tables, where teams worked on their plans, seeing where the groups were and offering up wisdom earned from their own entrepreneurial experiences.

The adventure-holidays-for-athletes team was trying to hash out exactly who its target market was before going into the community and asking the potential consumer if they would be interested in the product.

"For me it was to be involved in a process," said Greg Walker who presently works at Ziptrek.

"What's the process of validating your business idea and finding out if it's got legs?"

"(Adventure holidays for athletes) is very similar to an idea that I've got in my mind for a holiday company in Whistler. When the pitches were made yesterday, I was like, if his idea is close enough to mine, maybe that's something I could see myself getting passionate about."

Ian Middleton, who has experience as an outdoor adventure guide, pitched the initial idea of adventure holidays for athletes.

Startup Weekend, the organization which runs these weekend events, is a not-for profit company based in Seattle. So far, it has run over 1,500 events in 726 cities around the world. Cheryl Draper is a facilitator for Startup Weekend Squamish and has helped to run 16 such events.

"A lot of the ideas are geared towards the community, or are solutions to problems that the community might be having, which I think is really interesting," said Draper.

"(There were) not as many technology-oriented ideas as other events, but I think that speaks to some of the reasons why people live in Squamish... they are community oriented."

The weekend cost participants $99 per person, which included food. The winning team was determined by three judges who, along with 40 or so other curious members of the community, watched a five-minute presentation from each team.

The clothing-library group won a month of free office space at Startup Squamish and enrollment in the CORE business accelerator program, as well as entrance to compete in the Global Startup Battle taking place in cities around the world next month.

"If people start to think about Squamish as the next Boulder, or the next Silicon Valley or the next place to start a business, the community could really benefit," said Mario Gomes, the regional coordinator for the weekend who provided the impetus for bringing the event to Squamish by putting together an application and corresponding with the Startup Weekend operators.