Evacuation alert remains in effect due to wildfire near Anderson Lake

The alert was issued for the communities of Ponderosa, McGillivray and D'Arcy on Saturday, Aug. 11
Aug 11, 2018 7:40 PM By: Megan Lalonde 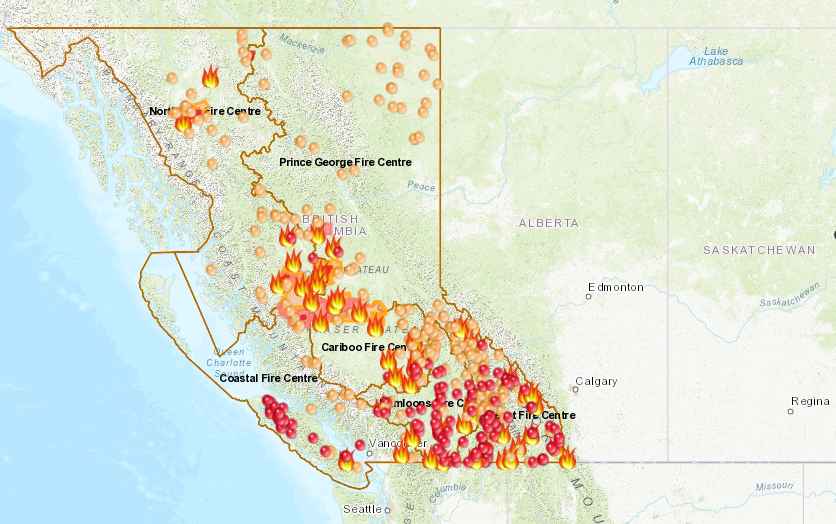 An evacuation alert remains in effect on Sunday for the communities of Ponderosa, McGillivray, D'Arcy and all identified properties in the Squamish-Lillooet Regional District (SLRD) Electoral Area C, due to a wildfire burning near Grouse Creek and Anderson Lake.

The alert was issued in the afternoon on Saturday, Aug. 11, after BC Wildfire Service advised the SLRD that the wildfire "now poses a potential danger to life and health" for those in the above-mentioned communities.

According to the SLRD, there was minimal growth in the fire overnight, thanks to cool and damp conditions on Sunday morning.

The Grouse Creek wildfire, located approximately 4.5 kilometres Northwest of D'Arcy is still actively burning after being discovered on Tuesday, Aug. 7. BC Wildfire Service estimated the fire's current size to be 300 hectares.

According to a web update posted by the BC Wildfire Service on Sunday, they are "monitoring this fire and evaluating all possible response options. Heavy smoke due to a weather inversion is reducing visibility and impacting operations this morning.

"The estimated size of this fire has not been updated because of the heavy smoke in the area that has reduced visibility. It will be updated as soon as visibility improves."

Three firefighters and one helicopter are currently working on the blaze.

An evacuation alert is not an order to leave, but an advance warning to prepare residents to evacuate their property if it is found to be necessary.

"Residents will be given as much advance notice as possible prior to evacuation; however you may receive limited notice due to changing conditions. Prepare now to leave quickly if it becomes necessary," read the alert.

The Highline Road, located between the fire and Anderson Lake, remains open at this time. However, the SLRD requests that all non-essential travel on the Highline Road be avoided, for both the public's safety and "to ensure uninterrupted access for BC Wildfire crews and other first responders."

As of noon, Whistler's Air Quality Health Index was listed at 4, which is classified as 'moderate risk', according to Environment Canada. Despite the heavy and visible smoke, the general population does not need to modify any usual outdoor activities, unless you are experiencing any symptoms like coughing and throat irritation. However, Environment Canada encourages members of the 'at-risk population' to consider reducing or rescheduling any strenuous outdoor activities, especially if you are experiencing any symptoms of respiratory illness.