Proposed express railway for the Sea to Sky likely a pipedream 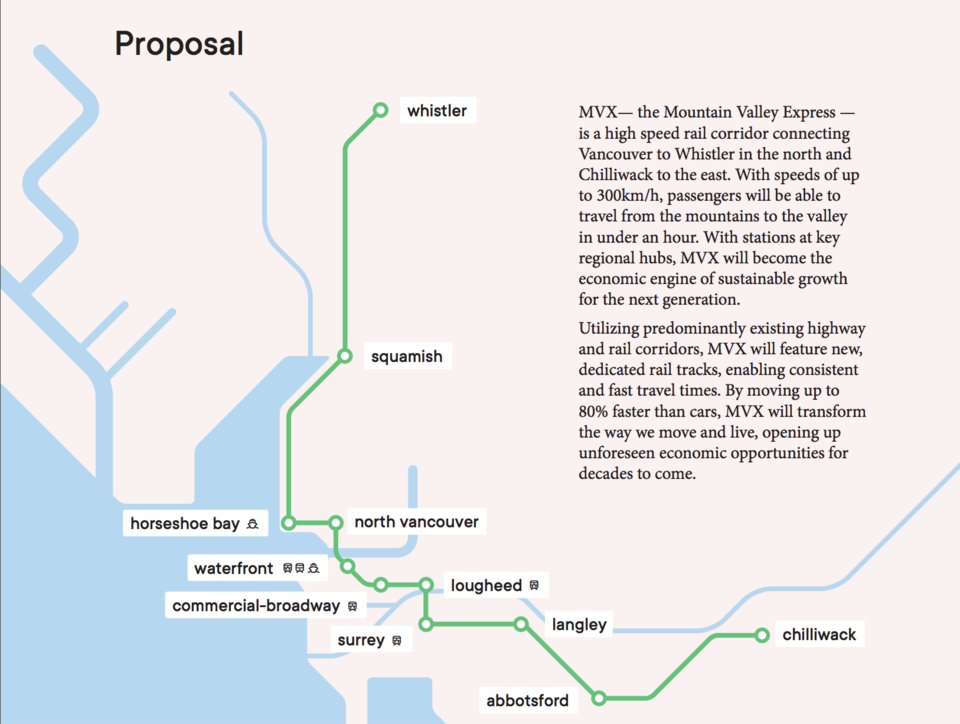 The team behind the vision for a high-speed rail line connecting the Sea to Sky to the Lower Mainland have pointed to a number of potential benefits that would make the proposed Mountain Valley Express (MVX) an attractive commuting alternative to Highway 99: a 31-minute trip from Downtown Vancouver to Whistler, a massive reduction in carbon emissions, the creation of 1 million B.C. jobs, and up to $61 billion in estimated “transportation benefits.”

If the concept put forward by a team of academics sounds too good to be true, it’s because, at least according to one prominent B.C. urban planner, it may be.

“Well, I’ve been fooled before, but my feeling is that it’s overblown and too expensive,” said urban designer Patrick Condon, who is also a professor at the University of British Columbia.

First unveiled on Oct. 6, the MVX’s final cost is pegged at between $7 and $16 billion, which would make it one of the largest and costliest infrastructure projects in B.C.’s history.

It’s also not the first time a high-speed rail concept has been proposed for the Sea to Sky; a similar project was put forth in the lead-up to the 2010 Winter Olympics that was seen as “financially unachievable” at the time, recalled Tourism Whistler president Barrett Fisher.

“The forecasts at that time were around $15 billion, so not dissimilar to the range that is being discussed now,” she added.

Condon believes that then, as now, there isn’t the political will to make a project of that scale and cost a reality.

“I think there are better uses of taxpayer dollars,” he said, pointing to an inter-urban rail transit line proposed between Surrey and Chilliwack as a more realistic, cost-effective option for the Lower Mainland.

“If you run the numbers on this so-called high-speed rail project, the cost per passenger would be in the hundreds of dollars amortized over a 30-year repayment period. It’s really not reasonable.

“We’ve gotten in the habit in B.C. of thinking if a big project is good, then a gigantic project is great—but that doesn’t really respect the taxpayer.”

But urban planner and PhD candidate Alex Gaio, who is the spokesperson for the MVX project, said that, given the worsening climate crisis and growing highway congestion, now is the time to consider innovative transportation solutions.

“There are a lot of things we know we need to do and there are ways we know how to achieve them, especially to reduce our carbon emissions,” he said, adding that upgrades to both Highway 99 and Highway 1 are inevitable given increasing congestion. “We know that 30 per cent of our emissions comes from transportation uses, so why not now propose a really bold vision to bring forward a high-speed rail connection to build back better?”

Considering the rugged, mountainous terrain found in the corridor, Condon believes the MVX would run into significant engineering challenges as well.

“Usually with high-speed rail—and they’ve encountered this in California—the thing has to go almost perfectly straight for long distances. When it hits a curve, the curve has to be very gradual, otherwise the train falls off the track,” he explained. “When you think about the topography between Downtown Vancouver and Whistler, it’s not exactly forgiving. It’s not the Prairies, that’s for sure.”

Condon also took issue with the number of stops along the suggested route. With just 11 stations between Chilliwack and Whistler, he believes the project won’t achieve the kind of cost savings needed to warrant the expense.

“It rules out having a number of stops along the line, which is particularly important south of the Fraser, so that you could pick up a lot of communities and actually have development areas within walking distance of a rail line,” he noted.

Then there’s the question of community impact on a resort town that, pre-COVID at least, was already wrestling with how to balance surging visitor numbers.

For Fisher, the proposal has several alluring potential benefits, such as lowering carbon emissions and traffic congestion as well as the added convenience of trimming travel times by three-quarters, but she also hopes to learn more of the project’s possible “unintended consequences.”

“High-speed transportation could create high volume of day visitors that the destination might not be able to handle,” she said. “The other thing I think would be important to consider is could it potentially have Whistler become a bedroom community of Vancouver? Could that potentially displace local housing for our tourism employees and/or inadvertently dilute our strong local community and culture?”

The MVX team hasn’t analyzed the project’s potential impact on community character, “but it’s obviously something we take very seriously,” Gaio said. “But the idea is, what’s the alternative?

“Although it’s a massively expensive infrastructure project … the big thing we want to hammer home here is that this is a big conversation starter to get people talking about this.”

The MVX Collective has called on the provincial government to launch a study assessing the project’s feasibility. To learn more, visit http://mvx.vision.