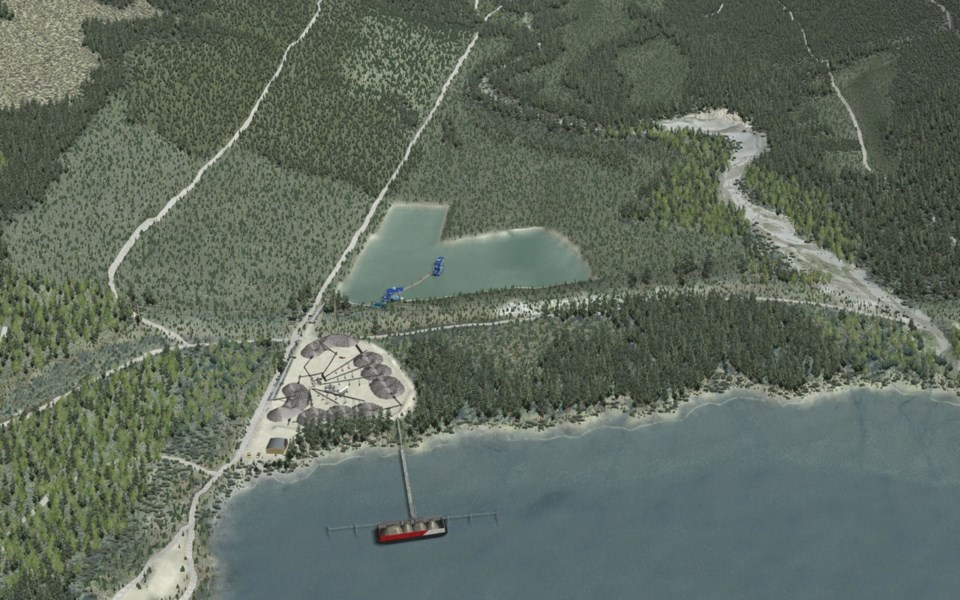 The federal environmental assessment of the proposed Burnco Aggregate Mine Project is nearly complete, meaning after years of public debate, the Howe Sound gravel pit is closer to a conclusion, one way or the other.

The public comment period on the comprehensive study report released by the Canadian Environmental Assessment Agency (CEAA) runs until Jan. 26. Originally slated to go until Jan. 22, the CEAA extended the comment period after a technical issue limited people's ability to provide comments or access the registry website around New Year's.

Burnco's proposal is for the construction of a sand and gravel mine located at McNab Creek, approximately 22 kilometres southwest of Squamish. The mine's production capacity would be up to 1.6 million tonnes of sand and gravel per year, and is expected to be in operation for around 16 years.

The CEAA's comprehensive study concludes — after considering Burnco's mitigation measures and proposed conditions by the BC Environmental Assessment Office — that the project "is not likely to cause significant adverse environmental effect."

However, there is disagreement on these findings. Ruth Simons, executive director of the Future of Howe Sound Society, has a number of issues with how the study was conducted, for example, how they measured potential noise impact on residents and wildlife.

"Being a valley, the sound will reverberate off the mountains and travel across the water," said Simons. "We really do not agree with the way the studies were done. The only standards that they based the assessment on were B.C. Oil and Gas regulations and Health Canada. There are no regulations that are relevant to this type of geography, there's only industrial-based or WorkSafe noise regulations. So I think the reason they end up at these conclusions is because there's not relevant regulations in place to protect pristine, quiet areas."

Along with noise, the biggest public concerns have been over water quality, and what potential affects the project could have on the estuary. Howe Sound has only recently recovered from years of pollution from the Britannia Mine, and it still has some locals on edge.

"Now that the acid rock drainage is being neutralized, we've seen a resurgence of the ecosystem of Howe Sound," said Ken Melamed, Green Party president. "People are celebrating the returns of orcas, dolphins, herring are spawning in greater numbers. We're seeing a revival as a result of, not just de-industrialization, but the active remediation that's been going on. People are really excited about that, and those same people are very concerned about re-industrialization, if you will."

In their proposal, Burnco has been trying to design against potential environmental problems, or putting in remediation to compensate some other way, like the construction of 4,034 square metres of in-stream habitat.

"I'm confident that we've put forward a really strong application. It's up to regulators now to decide if it's in the best interest of the province," said Derek Holmes, Land and Resource Manager for Burnco BC.

As of Jan. 15, the CEAA has received 26 comments from the public and Indigenous groups as part of the comment period.

Following this final public comment period, Catherine McKenna, the federal Minister of Environment and Climate Change, will consider the report, along with all the comments received and decide whether the project should go ahead as currently constituted.

Though CEAA approval would be a significant step, it wouldn't be the final hurdle for Burnco to break ground in McNab Creek. If granted, the project will then be referred back to Fisheries and Oceans Canada for authorization. The project will also require re-zoning by the Sunshine Coast Regional District.

Fisheries and Oceans Canada will then be accountable for ensuring any necessary follow-up and monitoring programs are implemented, so that will play a factor in their review. Simons and Melamed both expressed scepticism over the company following through on proposed clean-up once it gets approval, but Burnco said its reputation is on the line.

"It really comes down to the nature of resource extraction. Our company — which is a Canadian company — has been in business for over 100 years, and it's no mistake that you stay in business by doing what you say you're going to do. Gravel being non-renewable; it needs to be replaced. So this won't be the last project we look to do in the province, and you're really judged by the track record you have on previous projects. I think that your track record stands for itself," said Holmes.

Even still, Simons and the Future of Howe Sound Society plan to keep fighting the project. If necessary, they will send letters to Fisheries and Oceans and engage in the re-zoning applications. Simons is also leading an initiative to get Howe Sound designated a UNESCO biosphere reserve, which would mean a greater focus on sustainable development.

Added Melamed: "Howe Sound is a very special Canadian fjord. We don't have many, especially in such proximity to a major population centre. There's a lot of industrial and development pressures around an area that's so close to Vancouver, so it requires an extra level of diligence in assessing the merits of these various proposals."