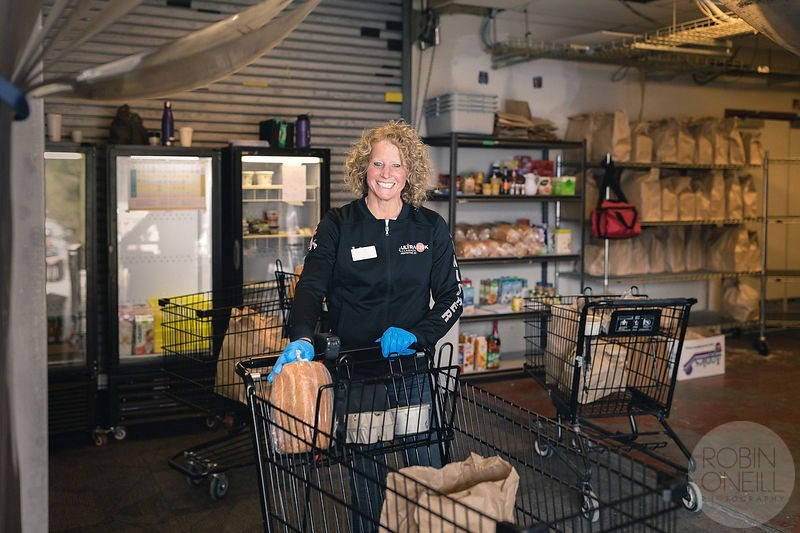 Along with a recent campaign in support of food banks across the Sea to Sky, Whistler Community Services Society is also hoping to raise $100,000 as part of a donation campaign. Photo by Robin O'Neill / Courtesy of WCSS

[Editor’s Note: Due to a miscommunication, an earlier version of this story that appeared online on April 28 incorrectly stated that the Feed the Need campaign intended to raise $100,000 for the Whistler Food Bank. In fact, the campaign is fundraising for food banks across the Sea to Sky, to go along with a separate WCSS email campaign to raise $100,000.]

Officials from the Squamish-Lillooet Regional District (SLRD) have teamed up with the Sea to Sky Community Services Society to support food banks during the COVID-19 pandemic across the corridor.

The campaign aims to raise much-needed money for food banks in Whistler, Squamish, Pemberton, Lillooet as well as the general SLRD food bank fund. The public can direct their online donation to their food bank of choice through the Sea to Sky Community Services (SSCS) website, at www.sscs.ca/feed-the-need.

“We are in a period of many unknowns,” said SLRD board chair Tony Rainbow in a release. “Not only is this a health crisis, but also an economic one and many people are suddenly out of work or on reduced hours, and many businesses are having to close or greatly reduce their operations. Food banks in our communities are already an essential lifeline for residents who need this service, but now, the need is rising sharply.”

The SSCS will distribute the funds to specific food banks when that option is chosen, but will not determine how the money donated to the SLRD’s regional fund will be dispersed. That will be decided by a committee comprised of representatives from the SLRD and will be based on the greatest need.

At the peak of the crisis, the Whistler Food Bank, operated by WCSS, was seeing a tenfold increase in demand, handing out roughly 500 emergency food bags a week. The increase also prompted the relocation of the food bank to the Whistler Conference Centre to better manage the demand and ensure proper physical distancing.

“The busiest period was the first two weeks when there wasn’t any government funding available yet,” said WCSS interim director Lori Pyne. “I’d like to think that people are using other resources as well as the government subsidies now.”

The WCSS has also launched its own email donation campaign, with the target of raising $100,000 by May 2. Ultimately, the organization is hoping to raise $1 million to make up for lost revenues and increased costs due to COVID-19—exacerbated by the loss of its main funding source: the Re-Use-It and Re-Built-it centres, which were forced to close during the pandemic.

“During this unprecedented time, I would like to encourage everyone who has the means to make a financial donation to a regional food bank to do so. Every person’s contribution can make a difference,” said Whistler Mayor Jack Crompton. “To meet the growing demand for emergency food in Whistler, the Whistler Community Services Society is working hard to allow more people to safely access the food bank in Whistler. Together, we can help ensure that everyone in the Sea to Sky Corridor who needs food has access to food.”

Donations can be made at mywcss.org/fundraiser.

Seven Whistler Village businesses—Whistler Hardware, Moguls Coffee House, evo Group, The Grocery Store, Armchair Books , Coast Mountain Photography and Foto Source—kicked off the email campaign in a big way last week, pooling together $3,500 for the WCSS, which has been matched by the Whistler Blackcomb Foundation.

“The residents of Whistler are strong supporters of small and local businesses in the village and we wanted to take the opportunity to give back,” said Whistler Hardware owner Shane Holland, who organized the initiative. Originally, the businesses were planning to donate funds towards the purchase of 1,000 N95 masks for the Whistler Health Care Centre, but decided to redirect the money after learning the masks weren’t needed locally.

With the Feed the Need funds donated to Whistler going directly towards covering the cost of food purchases, Pyne said that the non-profit would next turn its sights on re-launching its other community programs.

“For the longevity of our organization, we want to be able to provide mental health and emotional advocacy in the next months following the recovery. It’s really important for us to get through Feed the Need, then we can start with our mental health [programs],” explained Pyne, who said WCSS is now looking at reintroducing its parent, teen and toddler support groups.

“Aside from COVID, the fallout from this and the effect it’s going to have on people in the next year will prove to be even more important.”

Whistler musicians pitch in for Stay at Home Gala

Feed the Need isn’t the only local fundraiser giving back to those on the frontlines of the pandemic this week.

On May 2, the Whistler Community Foundation (WCF) will join community foundations across the country for the live broadcast of the Stay at Home Gala, an evening of live music and inspirational talks, with all local proceeds staying in Whistler and Pemberton.

The festivities will be divided into local and national segments, with the Canada-wide gala, featuring keynote speaker and Canadian hockey icon Hayley Wickenheiser, running from 5 to 6 p.m., and the Whistler portion, featuring half a dozen local musicians, from 6 to 7 p.m. With performances by Whistler musicians Monty Biggins, Susan Holden, Ev Kinsella, Rachel Lewis, Rebel Appliance and JennaMae Togado, the artists will also be taking song requests during the local pre-show at 4:30 p.m.

“All the music is going to be really upbeat and happy and getting a good vibe going,” said event coordinator Joelle Tiessen. “A hundred per cent of the money that gets raised through the Whistler site stays in Whistler and Pemberton, for the food banks, for WCSS, for the Howe Sound Women’s Centre—all the places that are really getting hit hard by people needing help right now.”

The WCF is hoping to raise at least $50,000 for its Emergency Fund, which is set up to quickly respond to the needs of the community as they arise.

“That’s really where we’re directing our fundraising efforts to now because that fund is really able to help those frontline organizations that are dealing with the most vulnerable community members, the food and the shelter, the most basic of human needs,” explained Claire Mozes, executive director for the WCF. “We are in close contact with all these organizations … and we can find out what the most pressing need is.” The Whistler Blackcomb Foundation has also committed to matching up to $15,000 in funds raised.

At press time, more than $12,000 had already been raised locally. Tickets are $50 (or $25 for financially restricted individuals), or $100 for a household. Donations and sponsorships can also be made at trellis.org/stay-at-home-gala-whistler.

More info on the Canada-wide gala and other regional events can be found at stayathomegala.com.

Elevate at Sunstone amendment passes at Pemberton council
Nov 26, 2020 6:30 AM
Comments
We welcome your feedback and encourage you to share your thoughts. We ask that you be respectful of others and their points of view, refrain from personal attacks and stay on topic. To learn about our commenting policies and how we moderate, please read our Community Guidelines.