Close to 50 vendors from across Canada sell their wares to 20,000 insatiable Pemberton Music Festival attendees
Jul 20, 2014 8:30 AM By: Brandon Barrett 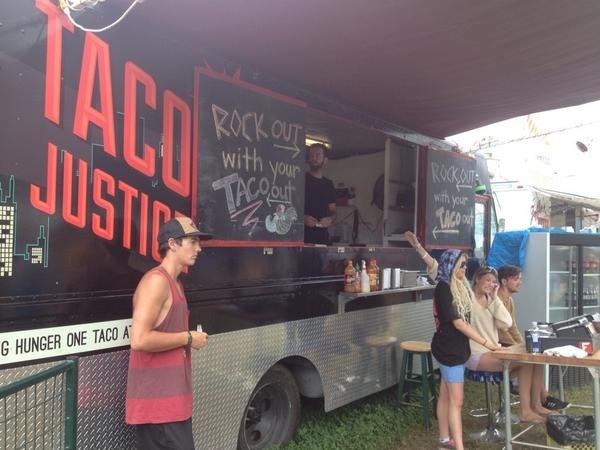 JUSTICE SERVED Victoria food truck Taco Justice was one of 46 vendors appearing at the Pemberton Music Festival this weekend. Photo by Brandon Barrett

Festival-goers have insatiable appetites that need to be fed.

Whether it’s the drink or something a little stronger, a waterslide or pop-up skate park, or maybe that new band t-shirt or original artwork, there are plenty of things to tempt you into opening your wallet at this weekend’s Pemberton Music Festival.

But the four-day extravaganza is also a great way for vendors to make a name for themselves, exposing their brand to an estimated 20,000 attendees from around the world. Some vendors are regulars on the summer festival circuit, while others are testing the waters at Pemberton for the first time.

Spud Valley artist Vanessa Stark is no stranger to festivals, having showcased her paintings and clothing line at such locally-produced events as the World Ski and Snowboard Festival and Whistler ArtWalk for years, and couldn’t resist the chance to sell her work in her own backyard this weekend.

“I like that I can ride my bike here,” she laughed from her stall facing Mount Currie.

The multimedia artist said sales have been steady so far, with more of her prints sold than she expected for a festival setting despite a relatively low turnout.(Organizers planned for up to 40,000 attendees.)

“I think there are less people here than expected, so it hasn’t been crazy, which is probably a little bit nicer for everyone here being a bit more spread out,” she said.

A few tents over is Dan Beardsley, owner of sandal maker Nomadic State of Mind, who said the area could benefit from closer proximity to the main Pemberton stage.

“It’d be good if we had a little bit more foot traffic coming in if the mainstage was moved a little closer to (the vendor tents) but it’s been good so far,” he said. “It’d be nice to have a little more of a main path.”

Even still, Beardley, who traveled coast-to-coast in the last week after selling his fair trade footwear at Nova Scotian festival Evolve, said things have run smoothly. “I wasn’t here (at Live Nation’s Pemberton Music Festival in 2008), but from what I’ve been hearing it’s a lot better organized this time.”

Of the 46 companies selling their products on the festival grounds this year, it’s probably the food vendors who have it the worst, slaving away in plus-30-degree weather in tightly confined spaces for up to 19 hours a day. Penticton food truck Thai on the Fly has been doing gangbusters so far with its traditional pad Thai served with a North American twist, and that’s just the way manager Ashley Dunsford likes it.

“This is everything we want in our job,” she said. “We’re working, we’re listening to awesome music, feeding people delicious food from our favourite country to go hang out in. And I mean, look at this backdrop — best office view ever.”

Understandably, dishing out over 6,000 noodle boxes over the course of the weekend requires a different approach than on your average day in the streets of Penticton, as Dunsford explained.

Normally, the staff will lay out a table of garnishes like cilantro, peanuts and chili sauce for diners to dispense on their own. But with a constant stream of exhausted, often intoxicated festival guests, that strategy doesn’t really work.

“For these big festivals, because the lines are so long and people are usually in another state of mind — the sprouts sometimes look like worms — we do the garnishes for them," she said. “They still get what they want but it just speeds up the process.”

Taco Justice out of Victoria is another food truck with a seemingly endless line of patrons, buoyed by its recent U.S. appearance on the Cooking Channel’s Eat St. Owner Temperance Phair hawked tacos at the original Pemberton festival six years ago, and couldn’t resist the chance to return.

“I know a lot of people put a lot of time and energy into organizing the festival and trying to make it a success that people are going to talk about. To be part of something that’s going to move in a forward direction with success and a good vibe, that’s what we’re about,” said Phair, adding that his 26 staff will go through a whopping 1,500 pounds (680kg) of vegetables this weekend.

“We don’t buy packaged stuff,” he explained. “We make everything from scratch; our sauces, our salsas, everything. So it takes a lot of people to do that.”

So exactly how many tacos will hungry revelers consume this weekend?