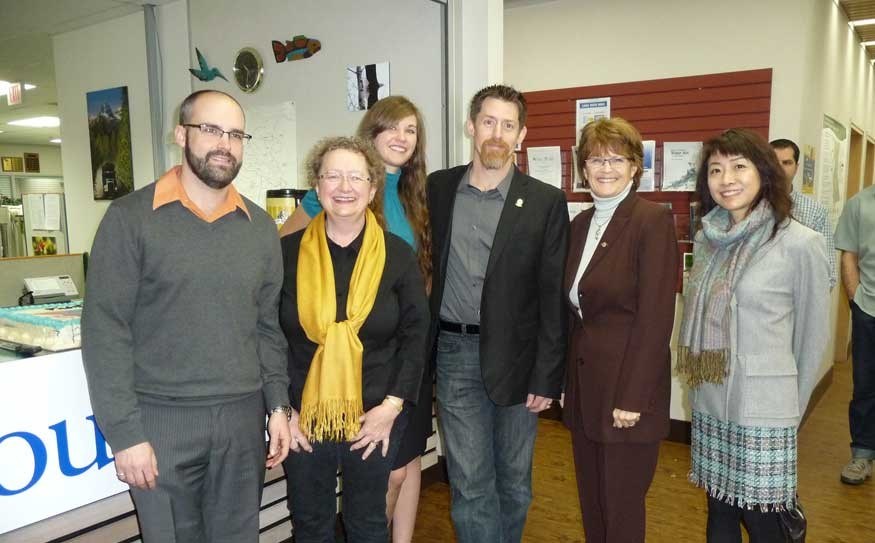 A new one-stop shop for residents and business owners seeking information, permits and general assistance for natural resources development plans in B.C. has opened in Squamish.

FrontCounter BC allows individuals or small-to-medium-sized natural resource businesses starting up or already operating to gain easier access to government services at the local level, eases dealings with multiple agencies and ministries.

The program was established in 2005, and the Squamish office is the third to open in the region, with others already open in Powell River and Chilliwack.

Joan McIntyre made one of her final appearances as MLA of West Vancouver-Sea to Sky at the launch of the service at the district office for the Ministry of Forests, Lands and Natural Resource Operations in Squamish on Feb. 15.

McIntyre said she heard from applicants in the region who tried to get information from six or seven ministries for their applications. The value of the service was to be "as co-ordinated and integrated as possible."

FrontCounter BC offices offer more than 130 natural resource-related permits and authorizations at each of its 29 B.C. locations and provides services on behalf of 16 additional partner agencies.

"I thought the one-stop shop model was an excellent idea. I know it was controversial at the time... ministries were changing and policies were moving one way," McIntyre said. "But because of my experience on the ground I realized how important this would be from the beginning. People don't seem to realize how dependent we still are on resources... we're a resource-based economy."

Dave Southam, manager for the Sea to Sky district of the Ministry of Forests, Lands and Natural Resource Operations, said the Squamish office had been planned since 2009. "We are pleased that time has finally caught up with us," he said. "We can provide awesome client service throughout the coast area."

Trevor Dunn, one of the proponents of the Sea to Sky Gondola project overlooking Howe Sound, came to the opening to lend his support because of the assistance they received while dealing with several provincial government departments as well as The District of Squamish and the Squamish-Lillooet Regional District. Dunn hopes to break ground on the project this spring, with the gondola being open to the public in 2014.

"When we dealt with staff here they were very supportive, they've been unbelievable in helping us through the process. They sent us on the right track before we started," Dunn said. "It does matter and it really helped us."

The in-person service of FrontCounter BC is backed up by a Virtual FrontCounter BC and online news for prospective applicants. For more information: www.frontcounterbc.gov.bc.ca.