Giving birth in Squamish during COVID-19 — and a baby boom

Five babies born on Mother's Day at Squamish Hospital; 35 expected by end of the month
May 16, 2020 3:32 AM By: Jennifer Thuncher/The Squamish Chief 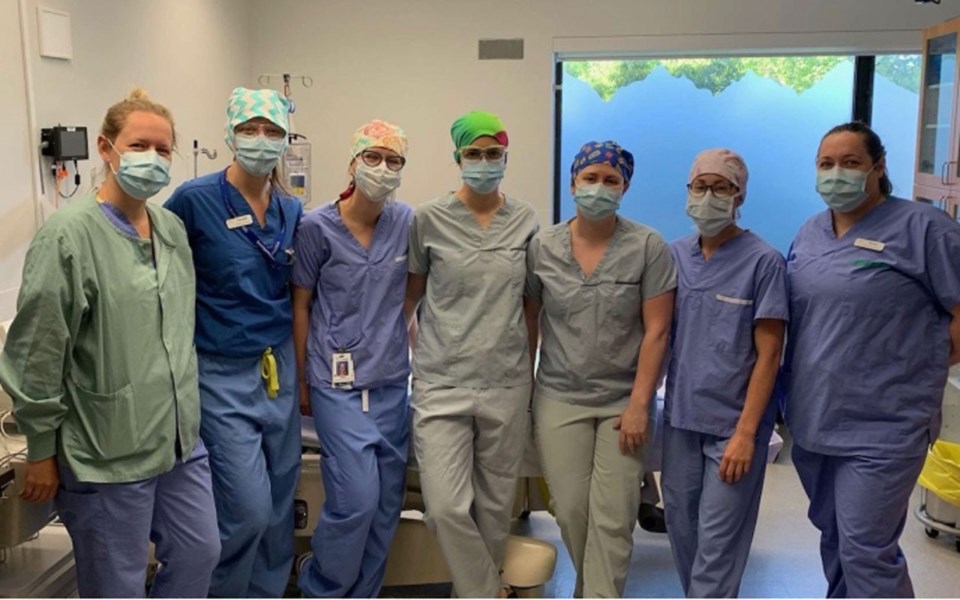 As if being pregnant and in labour during COVID-19 wasn't enough, Micaela Giuffre wasn't sure she was going to make it to Squamish General Hospital to deliver her second child on Mother's Day night.

In fact, as her husband Geoff Patterson drove them down the Sea to Sky Highway from Pemberton, the pair debated pulling over at Brohm Lake for her to birth the child in the truck.

But — he missed the turn-off.

Soon, Giuffre was in full-on labour.

Giuffre stayed on the phone with her midwife, who jumped in her car and caught up with the couple as they made their way to the hospital.

They pulled up to the new special maternity entrance and rushed Giuffre inside.

"It was really quick," Giuffre said with a laugh as her newborn cooed into the phone during the interview with The Chief on May 15.

Giuffre and her family live in Pemberton and received prenatal care in Whistler and Squamish.

She said a bonus of the pandemic is that—though it was a Sunday night, and a holiday—the highway was clear of traffic.

"We were really lucky in that respect," Giuffre said.

What Giuffre didn't quite grasp at the time of her yet-to-be-named baby's birth was that he was part of a local baby boom.

A total of five babies were born at Squamish Hospital this Mother's Day.

And what is more, 35 to 40 babies are expected to have been born by the end of this month, which is very high, according to Vancouver Coastal Health.

There are two groups of maternity care providers in Squamish—Mountain Maternity, which is made up of five female physicians, and Roots Midwifery, which boasts four midwives.

"As soon as May 1 arrived and we saw our list of expectant moms for May, there's just been this looming sense of anticipation: when will the babies arrive?" said Shandell King, lead obstetrics RN at Squamish Hospital.

It is a team effort, she stressed.

Extra nursing staff was brought in.

Also, one of the delivering physicians, Dr. Kristen Siemens came off her own maternity leave early to assist with the baby boom, delivering four of the five Mother's Day babies, according to the health authority.

Giuffre said she hadn't been too concerned about being pregnant or giving birth during the pandemic because of the relative safety of the Sea to Sky.

"You have to deal with whatever comes your way, and this is just what it is right now," she said, adding she knew what she was in for in terms of the birth protocols.

"I had been to the Squamish Hospital a few weeks ago for a checkup. I had been to the midwifery clinic for an ultrasound a month or two ago—everything just felt very calm and very organized and everyone seemed so prepared."

King said medical professionals are doing their best to normalize the maternity experience for moms.

One of the challenges with obstetrics during a pandemic is that "babies don't care about COVID," she said.

"While other departments in the hospital—and across Vancouver Coastal Health—were able to redirect patients and reduce volumes in anticipation of a COVID influx, we didn't have that luxury in OB," she said.

So they took action early to prepare for the pending pandemic-era births.

The maternity ward has been isolated and has a separate entrance.

"Previously all of our maternity patients would enter the hospital through emerg., get their assessment done in emerg., and be brought down to the maternity unit.

But of course, now, that is a big risk factor for pregnant women in terms of exposure to bugs," King said.

Currently, even if women are just coming in for prenatal assessments, they come through that new, special entrance.

Further, only one support person can come through with the woman in labour, reducing the risk even more.

"Because of the layout of our hospital, being on the ground floor, there has been a lot of really fun things that families have done to come to the windows to see the babies postpartum," she said. "Lots of balloons and pictures."

In the unit, there are dedicated OB nurses who are not moving between other departments in the hospital, as they may have pre-pandemic.

Each week the OB team also gets together to go over a simulation case concerning COVID-19.

"Just so that we are prepared as a team, if and when a woman with COVID presents in labour," King said.

To greet the expectant mom, staff are dressed in personal protective gear, King added. This means that patients can only see their caregivers' eyes, but usually, by the time they are in labour, women know who they are seeing.

"We are a small OB team of nurses, physicians, and midwives who do this work, so I feel like it is not a new person all the time for patients. We all look... the same with our masks and our goggles and our gowns, but hopefully, there is some familiarity there by the time they come in to deliver."

Though things are a bit different, many things are the same. Once the baby arrives, mothers can keep their newborns with them overnight in their room, still have skin-to-skin contact with their babies, as well as breastfeed, if women want to.

There is also a dedicated maternity clinic in town, where women can come for assessments, rather than going to regular doctor's offices, and appointments are spaced out. That way, expectant and postpartum moms aren't put in waiting rooms with other people.

"That has been great in terms of making women feel safer."

Midwives and physicians have also been travelling to Whistler to hold prenatal and postnatal appointments for women in that area.

"I just think it has increased access across the board in the Sea to Sky," King said.

"We are so proud of all these measures that we put in place quickly."