Gone but certainly not forgotten 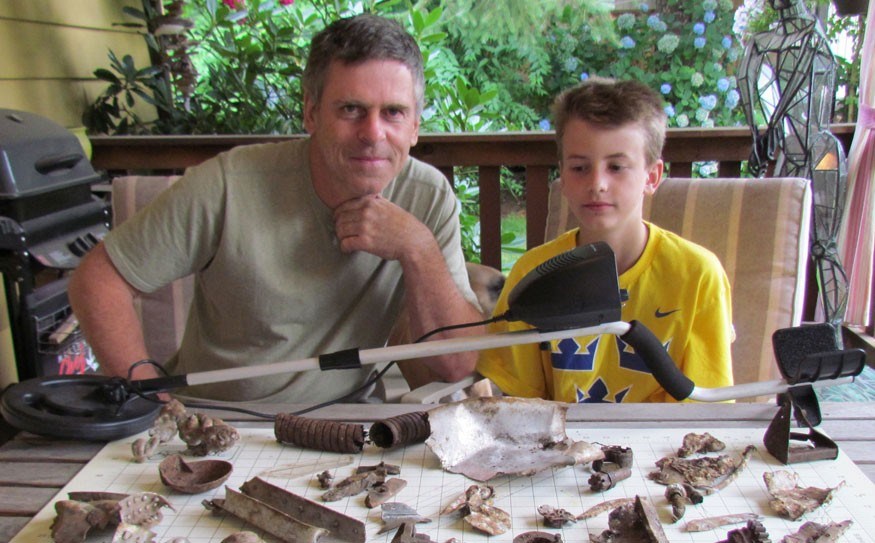 telltale signs Squamish residents John Buchanan and his son Alex with fragments from a doomed mercy mission flight, which ended in disaster in 1953. A plaque to acknowledge the five people who died in the crash is planned for the accident site. Photo suBmitted

It involved countless hours of searching through the thick brush and steep vertical cliffs of the unforgiving terrain of Cheakamus Canyon, but thanks to the tireless efforts of local resident John Buchanan and his 12-year-old son Nicholas, a nearly forgotten story that weaves into the fabric of Squamish's past has been brought back to life.

On October 19, 1953 a small plane took off from Gunn Lake, 193 kilometres north of Vancouver with five passengers onboard. Foul weather was believed to have caused the plane trouble, as it passed north of Squamish and crashed into a cliff face. All five died in the plane crash.

Buchanan learned of the plane crash a couple of years ago while scanning old newspapers for his research on past herring data. But instead of turning the page, he says he was drawn to the story of the crash and the people involved.

"I found it to be a very compelling story," he said. "It just spoke to me — you start reading that and you start to feel what they went through in 1953."

Having worked with the volunteer fire department in Squamish for six years, Buchanan says he could relate to the story of the emergency response team of the day.

"These guys went up north on a mission of mercy to rescue this miner that had got into an accident and were coming back... and that's probably why they made those decisions — they probably wouldn't have flown otherwise, but the clock was ticking on that miner's life."

With his curiosity sufficiently piqued, Buchanan asked his son to join him in the search to locate the crash site and for nearly a year and a half they doggedly hunted for the site in and around Cheakamus Canyon.

Nicholas commented that it was fun looking for the plane crash but he started to lose hope on their sixth try. But when he was "dragged out" with his dad for a seventh look on August 10, they were finally successful in locating the plane wreck site.

"When we found it I was very excited to rappel down the cliff with our metal detector," Nicholas wrote in an email.

Buchanan says a stroke of luck came earlier in August when he spoke with long-time Squamish resident Terry Aldridge, who remembers visiting the area when he was much younger and told Buchanan where to concentrate his search.

"I was working with two tight points," Buchanan noted, "but even with that, you're talking about a huge amount of area so he narrowed it down for me, so now I could zero in on one area."

He describes the search process as akin to looking for a needle in a haystack.

"If we hadn't been hiking with a metal detector going at the same time, there's no way we would've found it," he explained.

The pair was about 61 metres up a cliff above the railway tracks when all of a sudden the metal detector started beeping on the approach to one of the ledges.

The wreckage had been recovered a few weeks after the crash, however, Buchanan said, "They never ever would clean up a plane wreck completely – there will always be something left behind. And everything we found was about six inches down, buried under soil and leafy debris."

According to the newspaper report, the plane had struck a tree and caught on fire and in confirmation of this; they discovered large molten bits of aluminium and pieces of the windshield and frame.

They also found a metre-long control arm, which was hung on a small ledge.

A few of the fragments of the wreck sported numbers and after some investigating, Buchanan discovered the plane was a de Havilland Beaver.

"It's the Canadian icon bush craft — it was the taxi for the north of Canada," he said.

He contacted the manufacturer and sent photos of the wreckage and the numbers on the door hinge revealed it was 180 CF-GBB, a de Havilland plane that was in their database but its status was incomplete.

Buchanan notes it was really interesting to start putting the puzzle together.

And with the 60th anniversary of this nearly forgotten crash approaching next year, Buchanan and Nicholas sat down to discuss what to do next.

"We agreed that we're going to make up a plaque out of stainless steel with some information on it and fasten it right to the rock face, because it's a piece of history. People should remember what these people did, how they put their lives literally on the line to go out and rescue other people. They did what they loved to do, but on that particular day, their luck ran out.

"It is an important piece of local history that I do not want forgotten."