He was doing what he loved, says family of paraglider who died after jump from Stawamus Chief

Family thanks medical staff for Jordan Irons' care and encourages people to donate blood in his honour
Sep 2, 2019 6:25 AM By: Jennifer Thuncher/ Squamish Chief 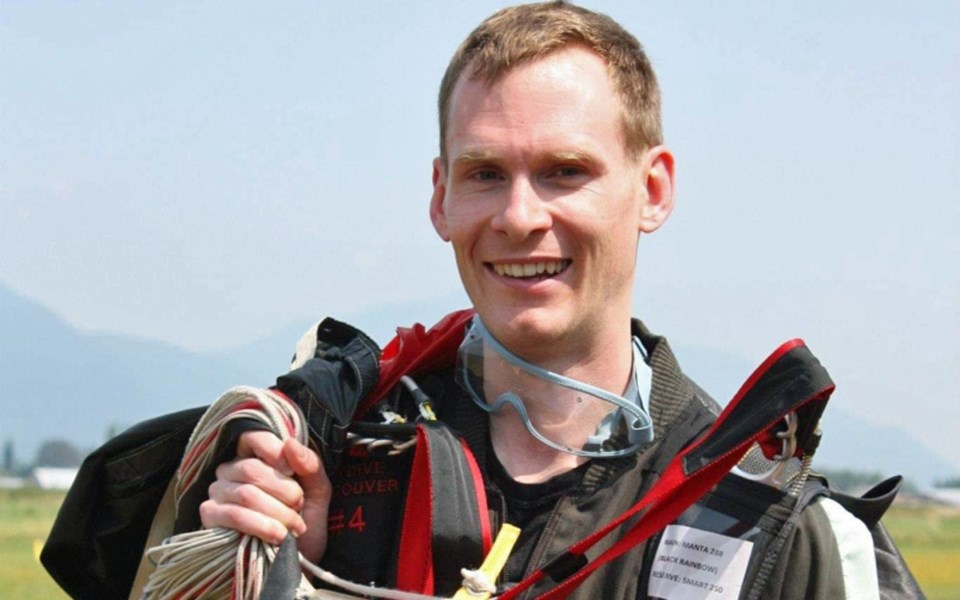 Paraglider Jordan Irons, who died after falling in a jump from the Stawamus Chief last week. Photo courtesy of Chris Mercer

Jordan Irons wouldn't want his death to stop people from pursuing extreme sports. That's one of the messages his family is sharing after the paraglider died from injuries sustained following a jump off the Stawamus Chief on Aug. 29.

The 40-year-old Burnaby resident died with his family by his side at Vancouver General Hospital Saturday night, his brother-in-law Chris Mercer told The Squamish Chief.

An avid outdoorsman and athlete, Irons visited the Sea to Sky often to pursue his favourite sports.

"He always knew that these types of activities had risks and he was very comfortable with the idea that if he ever were to pass that it could be something like this. At the end of the day, he probably died in a way he would have been OK with," he said. "He would be upset if it discouraged other people from doing those types of activities."

Irons, who had many successful jumps under his belt, was with his brother atop the Chief when he jumped. This time, something went very wrong.

“It appears the man was paragliding off the Stawamus Chief when he went into a spin with his wing and fell to the log boom area just to the west of where he launched from,” read an Aug. 29 RCMP news release.

The BC Coroners Service is investigating.

"The coroner’s investigation will look to determine who died, how, where, when and by what means he came to his death," a statement from the coroner read.

Mercer said the family has nothing but praise for everyone involved in Irons' care after the fall—from those who called 911 to first responders and medical personnel.

"The family recognizes that the hospital did an amazing job. The first responders did an amazing job … That gave him a great opportunity to fight, frankly," Mercer said, adding that, at times, Irons had 10 to 15 medical staff working on him for the better part of three days while in hospital.

"The effort they put in there was obviously fantastic. They never gave up."

Blood donations kept Irons alive while he was in critical condition, Mercer said.

"An insane amount of it," he noted, adding the experience has made the family want to encourage blood donation.

"[We want to] try and contribute back into our lives and society to make sure we promote that even more."

Mercer said Irons would also want it known that he was well trained and conscious of safety. People think he was an amateur who jumped off the Chief for the first time, he said, but that wasn't the case. "He has tons of education around it. He had jumped off the Chief the previous three weeks in a row. It is something he does quite frequently. He is super safety-focused," Mercer continued.

Irons worked for video game developer EA Sports for 17 years. He dedicated his free time to taking safety courses in things like wilderness and avalanche safety.

"We have received communication from a lot of people who we certainly didn't know, that Jordan had an impact on and that Jordan knew," Mercer said.

In lieu of flowers, the family asks that people consider blood donation in Irons' memory.

Go to blood.ca to find where to donate.

The Hang Gliding and Paragliding Association of Canada had not responded to a request for comment by press time. This story will be updated if and when they reply.

This story originally appeared in The Squamish Chief on Sept. 2. Read it here.