Environment Canada says up to 60mm could hit Squamish Saturday
Nov 5, 2016 5:45 AM By: Brandon Barrett 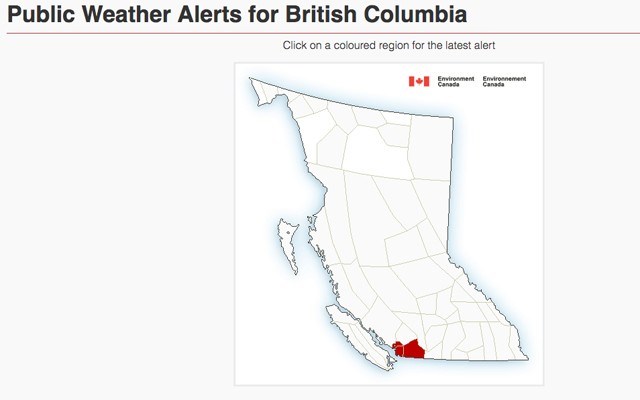 A heavy rainfall warning has been issued for Howe Sound, with up to 60 millimetres in the forecast for Saturday, Nov. 5.

"A moist Pacific front moving slowly across the region has given 40 mm of rain to Squamish by 11 am," the alert read. "A further 20 mm is expected this afternoon before the front finally moves to the east." The federal agency also warned of the possibility of flash flooding and pooling on roads. At press time, there had been no major traffic incidents reported on Highway 99.

Downpours have hit regions across B.C. this weekend, with heavy rainfall warnings also issued Saturday for Metro Vancouver and the Fraser Valley.

On Friday, a state of emergency was declared at the Tseshaht First Nation near Port Alberni after floods hit the reserve.

Moderate to heavy rain is expected for Vancouver Island this weekend as well. According to The Weather Network, some areas of the island have been hit with up to 300 mm of rain since Tuesday evening.

It looks like Whistler will be spared from the bulk of the heavy rains, with up to seven mm in the forecast before Sunday morning.