Province proposes amendments to Wildlife Act that would triple fines in some cases
Mar 23, 2016 6:00 PM By: Brandon Barrett 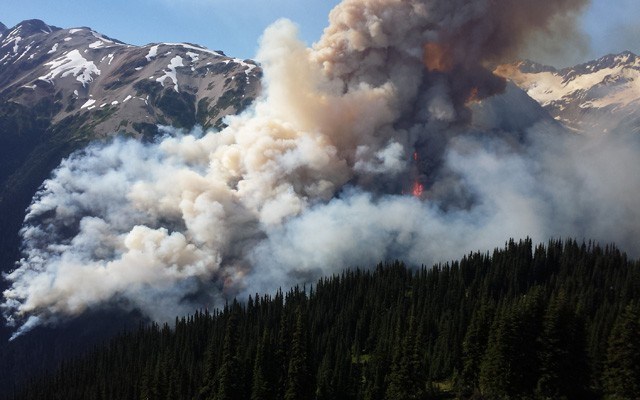 fire fines Victoria has proposed hiking fines for interfering with firefighting after a summer when B.C. was ravaged by wildfire. The 2015 Boulder Creek widlifire is pictured. photo courtesy of the BC Wildfire Management branch

Interfering with firefighting efforts in British Columbia could soon land you in hot water — and net you a hefty fine — thanks to amendments to the BC Wildfire Act proposed this month.

The amendments would raise fines for failing to comply with a fire restriction from $345 to a whopping $1,150. Interfering with the actions of firefighters, meanwhile, could lead to a fine of up to $100,000 and a year in prison.

"It's advisable to have those increases in (penalties) and I think it puts an emphasis on the issue, which is great," said Whistler Fire Chief Geoff Playfair.

The hike in fines largely stems from the growing impact drones have had on firefighting in B.C., Playfair said. Last summer, firefighters battling blazes in Oliver were forced to ground helicopters after a drone was seen flying in the fire zone and boaters blocked access to aircraft trying to fill their tanks on Okanagan Lake.

Local firefighters and conservation officers have also had to contend on occasion with campers reluctant to follow strict wildfire guidelines during the dry summer season.

"We just have really poor compliance," said Sea to Sky conservation officer Kent Popjes. "To me, the risk these people are taking is incredible."

Last summer, the Conservation Officer Service (COS) spoke out in the media about Sea to Sky officers facing confrontation and intimidation from campers who refused to put out campfires despite a corridor-wide ban.

"The signage was incredible and we had great awareness campaigns through media as well as the big billboards on the highway," Popjes added. "People know (of the restrictions), they're just choosing to ignore the signs, and it's going to cost them dearly now." The COS issued 48 violation tickets and 12 warning tickets across the Sea to Sky fire zone last year.

According to government figures, between 30 and 40 per cent of wildfires in B.C. are human-caused. The 2015 fire season was one of the most catastrophic in recent history, with 283,400 hectares burned and over $278 million spent on wildfire suppression.