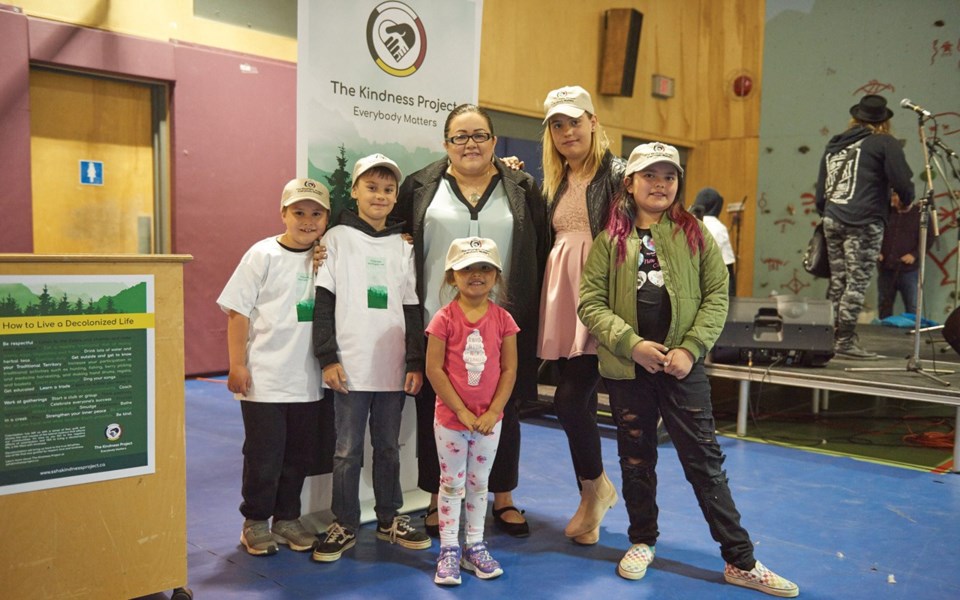 ­Before its official launch, the people behind the Southern Stl'atlimx Health Society's (SSHS) newest health and wellbeing initiative knew they were on to something.

A poster they created for the project—which is being called the Kindness Project—went viral on Facebook, resonating with Indigenous peoples in North America and beyond.

"I'm getting comments and inbox (messages) from people around the world," said Rosemary Stager, who serves as health director for the (SSHS).

"It's really (interesting) to read how much people are affected by colonization globally."

The poster—titled How to Live a Decolonized Life—provides a number of suggestions on how to live happier and healthier lives, such as "get outside and get to know your traditional territory," "learn your language," and "celebrate everyone's success." (It now has over 1,200 shares and has been viewed over 100,000 times, according to the SSHS.)

"We decided to focus on where we want to be, rather than where we are," said Stager, whose mother is white and from Pemberton, and father is a Lil'wat Nation hereditary chief.

The Kindness Project was officially launched at the Xet'olacw Community School in Mount Currie on Saturday, April 13, with almost 200 people in attendance.

According to Stager, entire families as well as chiefs from of the four communities that the SSHS serves—N'Quatqua, Samahquam, Skatin and Xax'sta (Douglas) First Nations—were on hand.

The day began with a traditional ceremony and included listening to a full-length CD, with cultural narratives and Ucwalmicwts songs that was released as part of the project.

An important goal of the Kindness Project is to bring about a greater understanding of lateral violence in Stl'atlimx communities, said Stager, adding that she was introduced to the concept through a First Nations Health Authority conference and feels it is vitally important to understand.

Lateral violence seen in Indigenous communities traces back to residential schools, where kids were forcibly removed from their homes and traumatized on a daily basis, explained Stager.

The effects can be profound. "You grow up in it. It's all around you," said Stager of lateral violence. "So we really want to change it, especially in an era where we are looking at rebuilding our First Nations governments ... It's a major barrier." Stager added that there is strong desire within the lower Stl'atlimx communities to address issues through traditional ways.

Things like the SSHS's men's groups—which have helped Stl'atlimx men build hunting cabins in their traditional territory and learn how to properly skin a deer—are viewed as important health-related initiatives, she explained.

"We are really trying to bring back the knowledge on how to pick different medicines ... and (learn) how to use them," added Stager.

Stager sees the Kindness Project as part of a broader effort to flip the paradigm of medicine altogether.

"When you look at the stories traditionally, the way we approached medicine back in the day was preventative," she said. "We really (want) to bring that other way back and increase our awareness of preventative (medicines)... (and) making better choices."