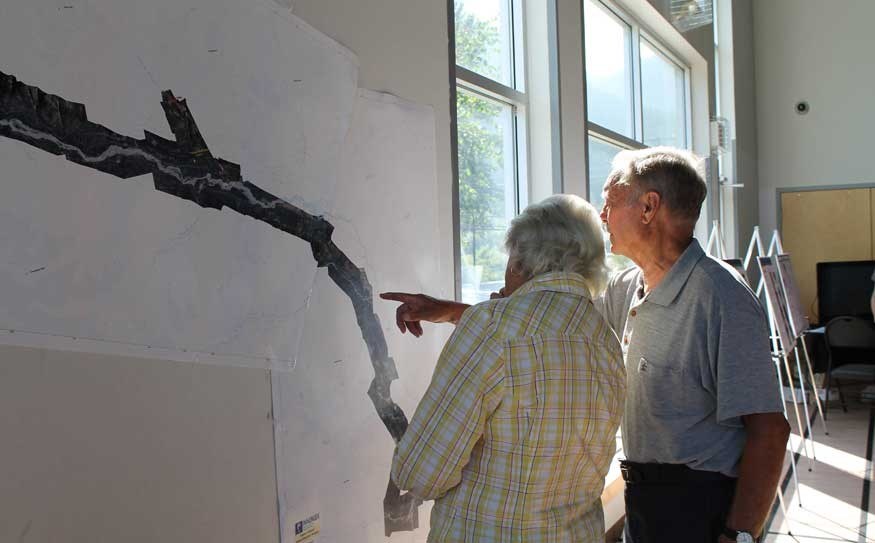 A couple look at a map of the Lillooet River at the open house for the run-of-river IPP in July 2012. Photo by Cathryn Atkinson

Innergex — the company behind the Upper Lillooet independent power project that gained environmental assessment approval from the provincial government earlier this year — has announced three significant changes to the project.

In March, the company formally applied to BC Hydro to scrap, for the time being, the North Creek power plant site, one of three IPP locations in the upper Lillooet River watershed.

It has also changed its overall plans for constructing the final two sites, cancelling a construction Request for Proposal (RFP) that had been previously issued.

As well, the company said the project would be delayed by several months, with construction expected to begin in the fall of 2013, rather than in the early summer.

Innergex spokesman Bas Brusche said cancelling the North Creek site was due in part to improved turbine technology, which would be used at the remaining Boulder Creek and Upper Lillooet sites, located about 60 km northwest of Pemberton.

"We might want to pick (the North Creek) project up at a later stage. We want to slightly increase the capacity at Boulder and Upper Lillooet River, not taking in more water because we are not allowed to do that, but to use the existing water more efficiently simply because turbines have become more efficient... we can produce more megawatts with the same amount of water," he said.

He said the total megawattage produced, minus North Creek, would now be 106.7MW, down from the original 113MW when the project was initially proposed, and down from the 121MW proposed when the environmental assessment application was made.

Brusche said there would be less of an overall environmental impact since North Creek would not be built. "It's a proposal to BC Hydro and it is currently in process."

A spokesperson for BC Hydro said they were limited in what they could say about Innergex's proposal because of confidentiality clauses.

"It is efficiencies. It is purely based on hydro measurements. We have had gauges in the water that have measured water speeds for several years, and we found out that North Creek is actually less efficient than hoped for, while the other two are more efficient," Brusche said.

"We tried to get the best economic value out of each project and are also very mindful of the impacts that each project has and currently (there isn't) sufficient justification to build North Creek, therefore the proposal (is) to cancel it. But if BC Hydro agrees, we will keep it on the shelf for a possible later project where we will have to start again."

Innergex also withdrew an RFP for potential constructors for the project.

"We will do some activities ourselves and use specialists for some activities that they are the best at. There are a handful of companies that we are in discussion with for this," Brusche said. "We're currently in process to find a constructor, so we can't be more specific right now."

Brusche said the construction cost has not been revised and remains pegged at $420 million, with operation costs of $8.9 million per year after completion.

The company also awaits final permits prior to the start of construction, including its Water Licence Permit and Land Tenure Permit from the B.C. Ministry of Forests, Lands and Natural Resources Operations. They were also awaiting several temporary use permits from the SLRD.

The timeline for the project has changed.

"We had hoped to start before summer but it's now more reasonable to expect that we can start just after summer... We're not too panicky about that. We have been working for years on this, a slight delay of a couple of weeks or months is not too dramatic."

Brusche said the market for IPP power had not changed and the Upper Lillooet project remains a desirable investment.

"Don't forget we still have electricity purchase agreements and we know what the results from the project are, even if the overall amount of power that we deliver is slightly different. From an economic perspective this project still has a decent economic viability."

Meanwhile, the SLRD granted the Sea to Sky Power Corporation a second Temporary Use Permit ending June 30, 2014 as part of the Skookum Creek IPP, at its regular board meeting on April 22. The power project is located 12 km east of Squamish on the Mamquam River.