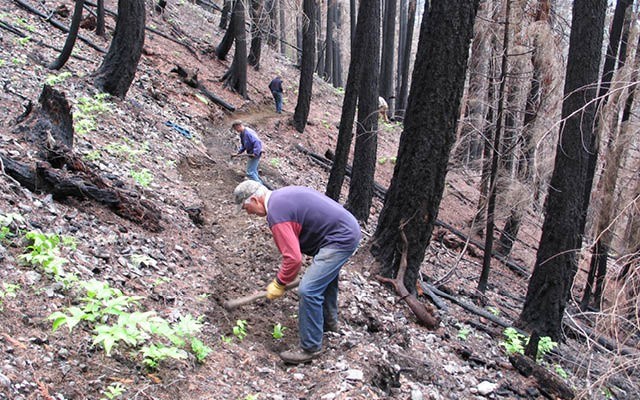 The Tenquille-Owl Lakes Recreation area north of Pemberton will remain open and accessible to backcountry hikers, thanks to a 10-year "maintenance and management" agreement signed between the British Columbian government and the Pemberton Wildlife Association (PWA).

David Harkley, a coordinator of the trail committee for the PWA, said the 730-hectare area is reached only by hiking in for three to four hours and includes a chain of lakes and old-growth forests. Motorized vehicles are not permitted.

"For the public, the significance is that the network of trails stays open and is maintained, repaired and has signage," Harkley said, adding he was proud of their involvement.

Founded in 1962, PWA describes itself as "arguably the oldest association in the corridor dedicated towards promoting conservation, preservation and enhancement of wildlife and outdoor recreational resources."

Harkley explains: "The reason our association is involved is that we realize there is a very small provincial budget for wilderness trails and sites, especially ones that fall outside provincial parks. These areas are important and provide great experiences for the public, but somebody's got to keep them open. We hope we can make a difference in our own area."

The PWA has taken care of Tenquille-Owl Lakes, which includes five primary trails and side trails totalling 51 kilometres and two wilderness campgrounds, for the last decade. It entered into a similar agreement with the province in 2003 that had expired in spring 2013.

Harkley said it is currently the PWA's biggest project and a longstanding commitment.

"Before this, there was historic stewardship of the area by the club and the community," he added. "There is also a cabin that the club took part in helping to build in the summer of 2011. There was a community effort to raise money (replacing one that had stood in the same spot for 90 years). The Pemberton Wildlife Association was an important part of that, but it was certainly a community effort."

Harkley said the Tenquille-Owl Lakes Recreation area was the only area the PWA was involved in managing. Their work involves keeping the trails open, removing blown-down trees, making sure bridges and trail markings stay up.

The not-for-profit conservation association has just over 300 members from both Pemberton and Whistler and beyond.

Tenquille-Owl Lakes is a rugged region and Harkley joked that he recently "donated" his cell phone to a creek while working in the recreation area.

"There's lots of people and good community support. Tenquille-Owl Lakes is the only area we have a stewardship agreement for. (The province) may have other agreements. We're completely non-profit and the funding maintaining the cabin and hiking in and out, that's solely funded through our association. We get no provincial funding for that," Harkley said.

"Now that the cabin is built it's not a lot of money. It's mostly man hours and that goes beyond volunteering because some of us take days off work to get the job done."

He said most of the activity is on the trails that to go into Tenquillie Lake, adding that "traffic was fairly constant" on the trail, but there are connections of "gorgeous wilderness trails" that create a loop that would take several days to complete.

John Crooks, the provincial recreation manager of Recreation Sites and Trails BC, part of the Ministry of Forests, said the PWA/Tenquille-Owl Lakes agreement was one of around 250 partnerships agreements in B.C., many of which are 10-year agreements.

"In terms of the size of the area of Tenquille-Owl Lakes, there are certainly a number of areas of that size around the province that local groups or First Nations are managing," Crooks said.

He added B.C. has about 1,300 recreation sites and 800 trails, and the importance of these local community groups could not be understated. Some of the agreements are for more than one recreation site.

"These organizations make or break the success of these areas. Without the agreements, which are essentially groups of volunteers around the province, without them it would be extremely difficult to manage or maintain trails like those in the Tenquille area," Crooks said.

"They are critical to our program. Probably the most important part of our program is those 250 partnership agreements we have."

He said that many people not involved would be unaware of the work being done by volunteers.

Crooks singled out the PWA and its work at Tenquille-Owl Lakes.

"The amount of time they've been around is significant. It goes back generations and it should be commended," he said.

A spokesperson for the Ministry of Forests said that it was policy to find local recreational user groups to help maintain areas like Tenquille-Owl Lakes.

Information on the trails and the PWA can be found at www.pembertonwildlifeassociation.com.