Last meeting of current SLRD board 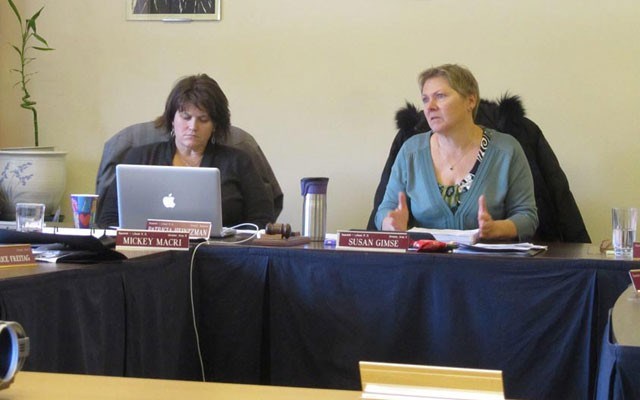 For the first time in more than 20 years, Susie Gimse wore jeans to the Squamish-Lillooet Regional District's (SLRD) regular board meeting.

"When I was campaigning in 1993, a guy was going door to door that was running against me, he had a suit and tie, saying 'you don't want that person Susie over there showing up to the board meetings in jeans,'" Gimse told the board.

"So I made a promise to my constituents at the first all candidates meeting that I would never wear jeans to a board meeting, and today is the first time in 21 years I've worn my jeans."

After 21 years on the SLRD board, Monday's meeting was Gimse's last as Area C director.

Newly elected Russell Mack will officially take over the position on Dec. 15.

"You can't speak about the SLRD without speaking about Susie Gimse," SLRD chair Patricia Heintzman said.

"She's been a leader in the organization for so long and seen so many changes there, so obviously her experience will be missed."

Area D director Moe Freitag will also not be returning, along with some of the directors from member constituencies like Pemberton and Lillooet.

"I wish them all well. They were all really good board members, served their public really, really well, and I'm looking forward to a new group," Heintzman said.

"It's always nice to refresh and restart and get some new ideas and energy in there, so I think it's going to be a really good mix."

A final decision on the relocation of the Whistler Waldorf School is still a few steps away.

At Monday's regular board meeting, SLRD directors voted to determine if the necessary changes made to the Regional Growth Strategy (RGS) would be deemed a minor amendment.

"A minor amendment essentially means that we have to make a few tweaks, mostly wording changes, in our RGS... to allow for it to proceed," Heintzman said.

The amendments to the RGS have now been referred out to member municipalities in the SLRD — Squamish, Lillooet, Whistler and Pemberton — as well as all adjacent regional districts.

"There's about 10 or 12 different local governments that, under our RGS, have to be informed when we make amendments to our RGS, so that's what we're in the process of doing now," Heintzman said.

"So the member municipalities will bring comments back... and if there are changes to be made it might go back to first and second reading, or if the comments are assimilated already in what the proposed amendments are to the RGS it will go to third reading and then up for adoption."

New SLRD fire services coordinator Darren Oike has been hard at work since being appointed in September.

"He seems to be doing really well," Heintzman said.

"The electoral area directors work really closely with him, but it's really nice to have that person who can bring that sort of gravitas to all those issues... I've seen some positive influence already."

At Monday's regular board meeting, board members approved up to $300,000 from Area C amenity funds to be allocated towards the purchase of primary and secondary apparatus and equipment for the Birken Fire Department.

"I think in every community, fire services is right up there on the list of priorities — making sure peoples' home and property is safe, and especially in these rural communities it's a real challenge because of the tax base," Heintzman said.

"It's just a very, very huge challenge to be able to provide good service, so I'm sure Director Gimse... is really relieved that after a long time of sort of studying this, they're bringing some much needed equipment to that D'Arcy-Birken area.

"Generally speaking, it's one of those things that you want to do right when you do it, so I think everyone is going to be pleased that we're finally rolling out on some of these initiatives that were outlined in the fire services report."

A bit of governmental backlog has delayed the Alternate Approval Process (AAP) that the SLRD put in motion last month.

The AAP is being used to seek elector approval for a $3.3 million loan for new office spaces in Pemberton.

"Once we know exactly when the AAP starts then we'll make sure there's lots of time for the public to comment, and we'll probably push that date back in January," Heintzman said.