Life and the final frontier 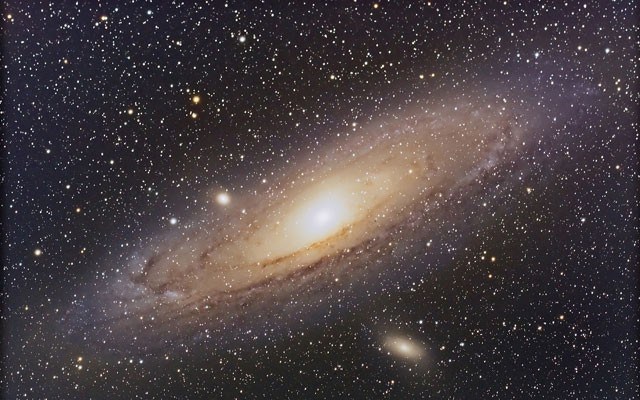 Endless possibilities According to David Helfand, there are likely "quintillions" of planets that could contain life similar to that found on Earth. Pictured: The Andromeda Galaxy in the constellation Pegasus.

How do you condense 13.7 billion years into six hours?

How do you summarize the whole of human evolution and life itself into a three-session university course?

Beginning Thursday, Oct. 16, Helfand will take students on a journey from the beginning of time, as we know it, in his How to Build a Habitable Planet course at Quest.

"I've taught on all these issues for decades now, and I've sort of distilled down what the highlights are," Helfand said.

Those highlights play out like a greatest hits of existence — from the building of atoms and the birth of stars, to the formation of planets and molecules and, ultimately, complexity.

"It has a comfortable temperature, and obviously fosters life that can contemplate these issues, so the question is, what is the story? How did we get from 13.7 billion years ago to today, and build up all that complexity?"

While the bulk of the course will be taken up tracing life's vast history, Helfand will take some time to look into the future as well.

"By the time we get to the end of this story, we'll be looking at the impact that we are now having on the composition of the atmosphere and what that's likely to imply for the future of life on this planet," he said.

There's no doubt that humans are impacting the Earth's climate, which will lead to drastic changes in the Earth's composition over time.

As water and arable land become scarce and the human population balloons, our ways of living will have to adapt.

Life itself, however, will likely carry on as long as the sun continues to shine.

"The fundamental time limit is the lifetime of the sun... and the sun has a finite lifetime. We're 4.568 billion years in, and we've got about 6 billion years to go," Helfand said.

The sun does get brighter over time, Helfand said, which could eventually lead to the evaporation of oceans or a major disruption in our atmosphere, which in turn would lead to incredible stresses on the capacity for life.

"But that happens on timescales of hundreds of millions to billions of years right? So that's a very long timescale," Helfand said.

But the course's subject matter isn't limited to complexity here on Earth.

Part of the class time will be used to explore the possibility of life outside of our solar system.

"Twenty years ago the first exo-solar planet — or planet orbiting a different star — was discovered, and by now we've discovered thousands of them only looking in our tiny little local neighbourhood," Helfand said.

"So we know that planets are the norm, not the exception, and we've found dozens of planets that are orbiting their planet stars in a zone where it's plausible that the temperature would be reasonable for complexity to evolve."

So just how many places could there be life similar to ours?

With the relatively recent data that has emerged in the last 20 years, astronomers can take a pretty good guess at the possibilities.

Astronomers can then say with some confidence that there are more than 100 billion planets in that galaxy.

"Not that every star has a planet, but many stars have multiple planets, like our sun does," Helfand said.

"Well it turns out there's 100 billion galaxies in the universe, and they're all pretty much like ours, and so that's 100 billion x 100 billion — which is one followed by 22 zeroes — and of those that are like earth, maybe it's a tenth of a per cent, maybe it's one per cent. It's still a very big number."

Contemplating these things can make a person feel very small.

But if you're worried about memorizing 13.7 billion years of existential progress, fear not.

"This is supposed to be a gateway. There's no tests, there's no stress. It's just to enrich one's intellectual life," Helfand said.

"The idea here is to stimulate people to want to learn more, and read things, and come to other classes that we offer in the future."

Registration for the How to Build a Habitable Planet costs $95 plus tax.