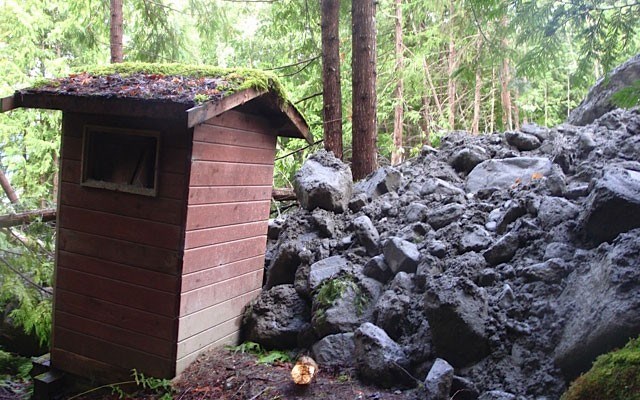 August Alert: Up to 25,000 cubic metres slide in the Lillooet Lake Estates area last August. Residents have been advised to evacuate. Photo submitted

More than eight months after a large landslide north of Pemberton, a mass evacuation notice has been hand-delivered to dozens of residents of Lillooet Lake Estates who are potentially in harm's way.

Residents there are running the gamut of emotions, said long-term resident Chris Malthaner — from fear and paranoia of those living right beside Cataline Creek, to nonchalance from those further removed.

He does not know of any of the roughly 25 permanent homeowners who have moved out, and yet the threat is hanging over the small community, particularly as the August anniversary of the landslide approaches.

"It's easy to say for somebody, but if somebody came to your door and said you should move out... I live here, I work here, I have everything in my house, where would I go?" said Malthaner. "That's a pretty tough thing to say to somebody."

That's one of the reasons why it took the SLRD several months to issue the April 2 evacuation warning. It came just over a week after the deadly mudslide in Oso, Washington State, which killed 41 people, with more still missing.

The timing is not lost on residents.

The board's decision was made during an in-camera meeting.

She recognizes the community's concerns.

More information will be available once a provincially funded Quantitative Landslide Risk Assessment (QLRA) is done — it's set to be completed Sept. 30.

"It will give a better sense of the risk for that area," said Flynn, noting that the area of most concern is the 800-foot (250 metre) corridor surrounding Cataline Creek, which has about 35 dwellings, 54 lots.

Though that is the area of immediate concern, the SLRD cannot say if the risk extends beyond that.

"The future we can't speak to until we have a better sense of the risk," added Flynn.

The Aug. 30, 2013 slide, trigged by an intense thunderstorm, was the third slide in the Cataline Creek area in the last decade. It deposited 10,000 to 25,000 cubic metres throughout the area. All indications to date are that there could be more slides to come.

A geotechnical report, completed in the immediate wake of the August slide, states:

"Given the density of settlement at Lillooet Lake Estates, and the history of recent debris flow in 2004, 2010 and 2013, it is surprising that no significant residential property damage has occurred, nor loss of life or limb... Under existing conditions, it is judged that is it only a matter of time before there is a fatality at Lillooet Lake Estates."

A week after that report, the SLRD hand-delivered a letter, accompanied by the report, urging residents "to educate themselves about the risks and to plan accordingly."

It has now ramped up its messaging.

"At this time, the SLRD is recommending that you, and others, cease to occupy any dwelling, trailer or tent located on your site."

It remains unclear how the problem will be fixed, and who is ultimately going to pay for it.

The QLRA will provide the updated picture of the geotechnical hazards and will identify potential mitigation options in a very general sense.

"... (W)hile the provincial government has funded the QLRA, it has not committed to funding any aspect of hazard mitigation that may ultimately be indicated," stated the SLRD's letter. "At the regional government level, the SLRD is governed by a Board policy not to accept responsibility for natural hazard mitigation except to the extent required by statute.

"We anticipate that upon completion of the QLRA, there will be a more up-to-date understanding of the debris flow hazard within the Cataline Creek drainage and some of the mitigation options. Site owners will then be in a position to decide whether or not to further pursue and fund the indicated mitigation options."

As far as residents are concerned, however, the failure is coming from Crown land and effecting the residential subdivision. As such, it should be mitigated by higher levels of government.

"We don't pretend that we're living in a safe community," said Gary Young, vice president of the Lillooet Lake Estates strata. "This has happened in several places in the province," he added, pointing to the $6 million debris barrier on Fitzsimmons Creek in Whistler. "Solutions have been implemented."

Taxi service returns to Pemberton
Aug 10, 2020 8:00 AM
Comments
We welcome your feedback and encourage you to share your thoughts. We ask that you be respectful of others and their points of view, refrain from personal attacks and stay on topic. To learn about our commenting policies and how we moderate, please read our Community Guidelines.