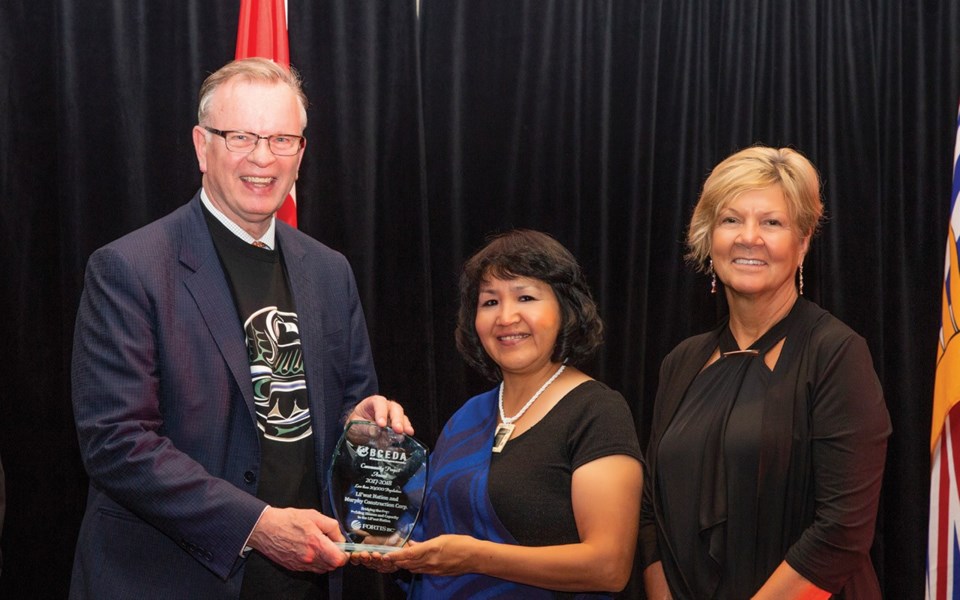 The Lil'wat Nation and Murphy Construction Corp. have won a BC Economic Development Association (BCEDA) award for their ongoing collaboration.

"We didn't find out until we attended the annual award (ceremony)," said Kerry Mehaffey, CEO of the Lilwat Business Group. "We were pretty excited when we found out we won."

The award was presented to Lil'wat Nation Councillor Lhpatq Maxine Bruce in Kelowna on June 13.

Lil'wat Nation and Murphy Construction won in the Community Project category for a population under 20,000.

The award recognizes projects and initiatives that provide economic benefits to a community or region.

Having outside recognition for the Lil'wat-Murphy relationship felt great, said Mehaffey. It helps "create a sense of pride around the work that we've been doing," he said, stressing the job and training opportunities that have arisen over the years.

Murphy Construction has been working closely with the Lil'wat Nation since 2014.

As part of a strategic partnership agreement with the Nation, Murphy has carried out a number of major capital projects for the nation while simultaneously providing job opportunities and construction management opportunities.

Murphy Construction has renovated and built multi-family housing units, and it is currently wrapping up construction work on the Ts'zil Learning Centre, a $7.21-million post-secondary facility that will provide training and cultural programming in Mount Currie.

It is also moving forward with the construction of two new projects this fall with the Lil'wat Nation—a new Gas Station in Mount Currie and a new Health Centre at Xet'olacw.

Currently, 26 members of Murphy's workforce are from the Lil'wat Nation and 22 of them are registered apprentices, said Mehaffey.

The goal of the partnership, he said, is to "build projects in a cost-effective manner and use as much as the labour force from the community as possible."

For Graham Murphy, CEO of Murphy Construction, the BCEDA win is an important recognition, as it acknowledges the economic opportunities that have arisen because of the partnership.

"It's a fantastic partnership that's rewarding at so many levels," he said, adding that the ratio of Indigenous employees at Murphy fluctuates between 70 and 80 per cent.

"It's not just Murphy Construction providing these job opportunities, it's our sub-trades that have bought into our guiding principles.

In addition to the BCEDA, Murphy has been recognized by Industry Training Authority BC for giving trades opportunities.

Murphy has been awarded the contract to build the gondola barn for Whistler Blackcomb's new high-speed gondola, a project that will be built by a team of Lil'wat members. Construction is already underway