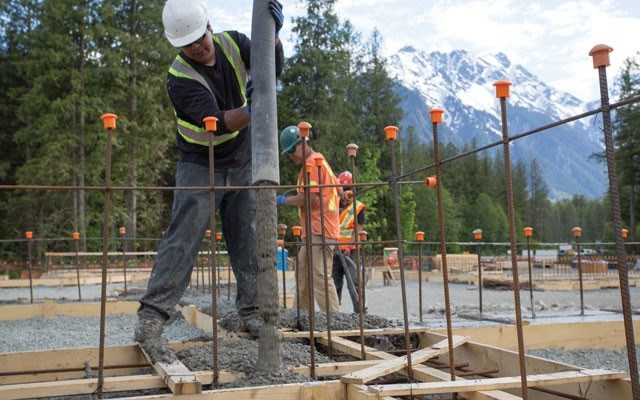 Solid Foundation The Ts'zil Learning Centre is going to move out of portable buildings and into a new home in Mount Currie in 2018. PHOTO submitted

The Lil'wat Nation is building a post-secondary facility in Mount Currie. The building will be the new home to the Ts'zil Learning Centre.

The state-of-the-art building is a "statement of pride" for the community explained Skalulmecw Chief Dean Nelson of the Lil'wat Nation.

Nelson attended the Ts'zil in its current incarnation: a number of portables.

The new school, he said, will represent "a major leap" for the community and provide a beautiful space to learn about Lil'wat culture and pursue job training and post-secondary studies.

Ts'zil is operated in partnership with Capilano University, and has served as a stepping stone for post-secondary studies, offering adult basic education and upgrading and business certificates.

Over the years, it has also offered trades education, including Carpentry Level One.

The school, moreover, is also focused on fostering First Nations' culture and language. It currently offers a two-year Lil'wat Nation Language and Culture Certificate in conjunction with Capilano.

The new facility has been financed with a $7.21-million-dollar grant from the federal government and is scheduled to open in the fall of 2018.

Built by Murphy Construction Corp., a Pemberton-based construction company, it has a 68-per-cent First Nations workforce.

All of the carpenters, labourers and carpenters' helpers working on Ts'zil are from Mount Currie, said a recent press release from the company.

According to Nelson, employment and training goals for Lil'wat members was written into its contract with Murphy.

"We're learning that we have to say what we want with our partners," he said.

Murphy Construction is also building duplexes and a youth centre in the community, added Nelson.

Said Natalie Langmann, a spokesperson for Murphy: "Our vision is to grow and have our labourers complete their red-seal tickets."

Revitalizing the Lil'wat language will be a key goal of the new facility.

"It's connected to everything: to the land, animals, to cultural activities," Nelson explained. "It all has to do with language."

The chief, who took office two years ago and has another two to go, credited the hard work of previous chiefs and councils for bringing the learning centre to fruition.

"It's been a long time coming. Things are working OK for us. And things are falling into place," he said.