The Ts'zil Learning Centre has traded trailers for a grand new building
Oct 27, 2018 1:00 AM By: Joel Barde 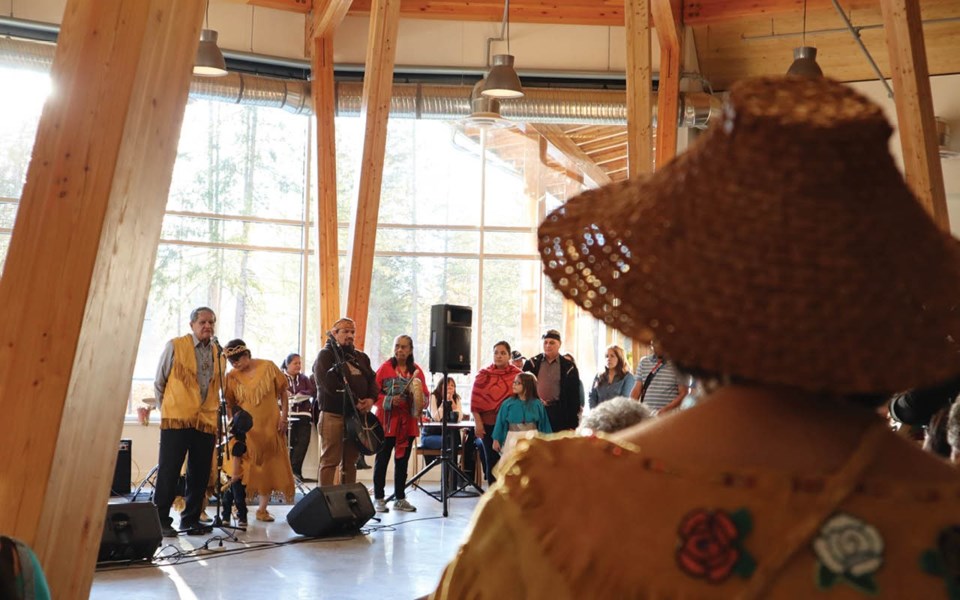 After more than 20 years of operating out of trailers, the Lil'Wat Nation's Ts'zil Learning Centre finally has a permanent home.

"It's pretty beautiful in there," said Mason Ducharme, referring to the new centre, following its grand opening Oct. 18.

Wearing a stylish suit and tie, Ducharme, who serves as manager of advanced education and training for the nation, said the main room—which features a circular post and beam roof that funnels upwards, into a round skylight—is based on an Istkin, the traditional winter home of the Lil'wat people.

"It really makes it feel like home," he said, speaking of the cultural significance of the design. "It's one way to bring back our culture—to inform people that this is what we used to live in." The $8.8-million building will focus on adult education and will offer classes in partnership with Capilano University and Vancouver Island University.

In addition to having access to carpentry and high-school upgrading courses, students will have access to First Nations studies and Ucwalmícwts, the traditional language of the Lil'wat people.

Ducharme said that the building—which includes 10 classrooms in total—will allow the centre to offer more classes.

But before going forward with any big decisions on curriculum, he wants to consult with the community and make sure that the centre's offerings reflect the needs and desires of members.

Repeating what he said in front of a huge crowd that gathered for the grand opening earlier in the day, Ducharme stressed that it is critical for the community to set the direction.

"The way I see engagement with the community is sitting down and having a meal with them," he explained.

That information will be used to create a document that will guide day-to-day operations and planning, he added.

"This is the community and the students' building," he said. "My approach is that (they) know what they want to do and where they want Ts'zil to go."

In his comments to the crowd, Leonard Andrew—an elder who serves as cultural chief of the Lil'wat Nation—said that the community has long fought for a permanent home for Ts'zil.

Andrew joked that the trailers were always referred to as the "temporary" home of Ts'zil.

"We will probably be calling this the new building for the next 30 years," he said, prompting a hearty round of laughter.

Located in Mount Currie, just off Lillooet Lake Road, the new Ts'zil sits on land that was acquired in 1999 from the Catholic Church.

Yet the process of transferring the land to the reserve took 17 years to complete.

A fluent Ucwalmícwts speaker, Andrew said that he was thrilled that the vision of elders had come to fruition.

"Our language is dwindling, and it has been for a long time. Now it's being taught here," he said.

The impressive building was built by Murphy Construction Corp. and BC Passive House.

Murphy boasts a large contingent of Indigenous workers, including Mount Currie's Shayne Peters, who served as lead carpenter on the project.

Peters said that being involved with the project had special significance, as the new Ts'zil will play an important role in the community.

His sister-in-law will be married in it in early December, he noted. "It will be nice to have something like this," he said.

For Georgina Dan, a Ts'zil student who is upgrading before moving on to post-secondary studies, the new building represents a big win for the community.

"I feel like this is something that a lot of the community has dreamt of and it's finally here," she said.

Dan had previously studied at Vancouver Island University, but came back home because she was not happy with the program she was enrolled in.

"It's a lot easier to learn in the environment I grew up in," she said. "I've never really been anywhere else. To be able to have this as a transition—I don't really have words for it."