Premier bails on high-profile opening ceremony
May 18, 2014 3:10 AM By: John French/Pique Newsmagazine 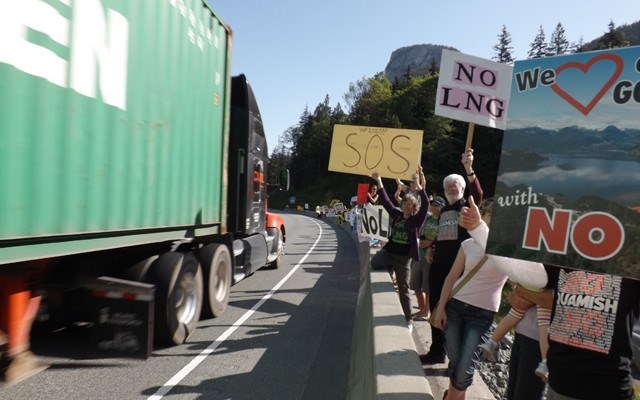 ENERGETIC DEMONSTRATION More than 100 people stood on the side of Highway 990 Friday, May 16 with signs protesting a proposed LNG export facility in Squamish. Photo by John French

The Sea to Sky Gondola is officially running and the grand opening celebration was flavoured with a little controversy.

The group, My Sea to Sky chose to support the gondola and at the same time voice disapproval for Woodfibre LNG's plans to build a liquefied natural gas export facility on Howe Sound. Over 100 people gathered with protest signs at Shannon Falls on Friday, May 16 as provincial cabinet ministers and other gondola project leaders were arriving for an opening ceremony at the top of the gondola.

Premier Christy Clark was originally scheduled to attend but cancelled the night before, asking Naomi Yamamoto, the Minister of State for Tourism and Small Business, to speak on behalf of the provincial government and cut a ribbon to mark the grand opening of B.C.'s newest tourist draw.

The protesters stood beside Highway 99 through the morning with signs indicating support for tourism while making it clear they don't support Woodfibre LNG's plans.

Protest organizer Tracey Saxby said more than 120 participated in what she described as a peaceful demonstration.

While on the main Sea to Sky Gondola deck 885 metres above Howe Sound with a clear view of the former pulp mill site, Yamamoto said tourism and industry can co-exist.

"I don't think we should be making choices between one sector or industry and another," said Yamamoto. "I think we can do both of them successfully."

"I don't think we see an either or situation," he said atop the viewing platform at the gondola's top station. "I think these things can be compatible — be it forestry, mining, energy. It is a resource-based province and tourism is another resource. We need to have it all work together."

Saxby said she disagrees and argued the industries won't work well together.

"We're still living under the stigma that Squamish is an industrial town and we need to shake that off," said Saxby. "I'm really concerned that if we have Woodfibre LNG just across the water so visible from the highway that we're never going to be able to shake off that stigma."

She said some heavy industry is appropriate for Squamish but not industries involved in resource-extraction.