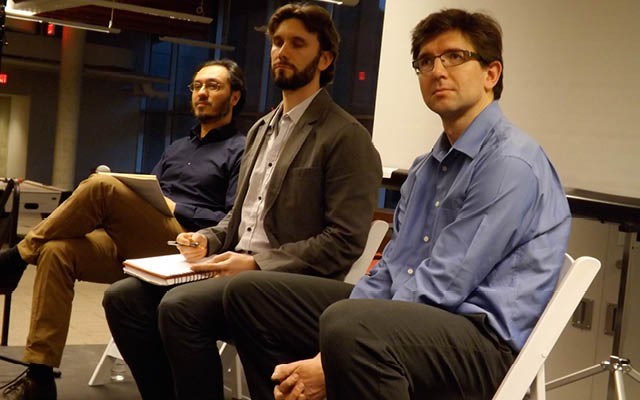 Close to 350 people interested in learning more about the potential impacts of Liquefied Natural Gas export facility just south of Squamish packed a discussion by three experts on the topic.

A group calling itself My Sea to Sky organized the panel discussion at Quest University April 8. The panel was made up of Matt Horne, the associate regional director of the Pembina Institute, Jeremy Moorhouse, the senior analyst with Clean Energy Canada and Marc Lee, a senior economist with the Canadian Centre for Policy Alternatives.

Lee made it clear in his opening remarks that he disagrees with a number of things the provincial government is saying about LNG.

"We're seeing what can only be called propaganda coming from the provincial government — completely outlandish claims about the number of jobs that will be created, the amount of revenues that are going to be coming, how we're going to reduce emissions in China by doing this, every child in B.C. will get a pony, this kind of stuff," said Lee, triggering a laugh from the audience. "We're not actually getting an honest public debate about the benefits and costs."

Lee doesn't believe the provincial government has an adequate plan to address the "complicated nature of the environmental and social impacts" of the industry. He also noted B.C. has laws designed to reduce greenhouse gas emissions.

"The expansion of this industry is in conflict with the 2007 law that we brought in around greenhouse gas reductions," said Lee.

He went on to challenge the province's estimates around how many jobs the LNG industry will create and the potential revenues it will generate for the province.

While the government is predicting hundreds of thousands of jobs will be created across the province, Lee estimates there will be 800 permanent jobs in the LNG facilities and 9,000 short-term construction jobs.

Moorhouse said the only way B.C. can hope to produce the cleanest LNG in the world is to use electricity to cool the natural gas.

"We found that it would produce 400 more permanent jobs in the northwest," said Moorhouse. "You also get about a 30 per cent reduction in carbon pollution at these facilities."

Horne outlined the proposed LNG system across the province, from the fracking and drilling process to the extraction of the natural gas, to the processing plants like the one at Taylor just south of Fort St. John and the pipelines that deliver the gas to end users.

A question and answer session followed the lengthy opening comments from the three panelists.

One attendee asked about what it would take to stop an LNG export plant built at Woodfibre.

Lee answered it would take those with concerns to rise up in large numbers and tell government leaders such a facility is opposed. He also said he disputes claims that natural gas is a better alternative to coal because natural gas produces fewer greenhouse gasses.

"The idea that the more we can sell to China, the better off we'll all be, and that this is consistent with clean energy policy in B.C., in my opinion, is just utter garbage," said Lee.

He went on to say that when natural gas leakage is factored in, natural gas is actually more problematic than coal in terms of greenhouse gas emissions.

More than a dozen LNG export facilities are proposed for B.C. and many of them have federal export licenses, though none have yet been through an environmental assessment process yet.

Woodfibre LNG is working toward submitting a proposal to build one of the smallest LNG export plants in the province. The company is a subsidiary of Pacific Oil and Gas, a company owned by controversial Indonesian businessman Sukanto Tanoto.