Sea to Sky mums celebrate Mother's Day and Mother Earth with their children
May 9, 2012 9:00 PM By: Dawn Green 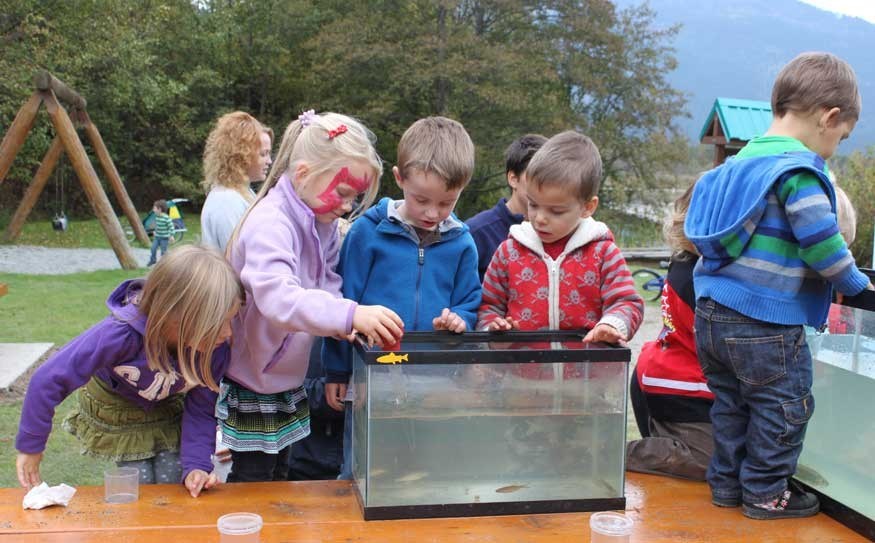 Ashleigh Woodruff is no stranger to the natural world surrounding her home in Pemberton. In fact, the active three-year-old recently celebrated her birthday in the forest, squatting down and crawling through the underbrush. She accompanied her mother, Veronica Woodruff, an environmental technician at Ecofish Research Ltd., on a reptile survey in the Pemberton area, not an uncommon occurrence for the mother-daughter duo. Their mission on this particular day was to locate a Sharp-tailed Snake or a Northwestern Alligator Lizard. Their search lasted an hour and just as they were about to turn for home, Ashleigh cried out excitedly, "Mum, I got one!"

"There she was, holding one of the rarest snakes in the province in her hands," recalled Woodruff, a sense of pride creeping into her voice.

A classic example of a mother and child bonding through experiences in nature, Woodruff, alongside many Sea to Sky corridor mums, are discovering a strengthening bond with their children through direct contact with Mother Earth.

Woodruff stresses that this connection can be nurtured close to home.

"We have such an interesting ecosystem right here, in our backyards," said Woodruff.

Children possess a natural ability to get out there and be fascinated by the local ecosystems, she said, whether it's digging for worms in the garden, or going down to check out the lamprey eels spawning in the creek or looking at the buds on the trees coming out in spring.

"Through those simple connections in the backyard, you can build those fundamental skills that last a lifetime."

Woodruff, also a board member with the community organization, Stewardship Pemberton, said that facilitating opportunities for families to embrace nature together is one of the group's fundamental goals. A parent-tot walk program held last summer was a success, and she noted that although kids are the main focus, parents also benefitted enormously from the interaction with nature.

"All our programming engages both the parents and the kids and having them out there together is one of the most successful things that we've done for sure," Woodruff said.

Dawn Johnson, mother of two and another board member of Stewardship Pemberton, is passionate about mothers sharing nature with their offspring.

"Mothers have a real opportunity to nourish that connection from a really early age," Johnson said. She said it's really important, especially in this day and age with so much external stimulation from computer devices and phones, to take it down a few notches and get back to the basics.

Sparking inspiration in the younger generations and instilling in children a sense of curiosity so that they start asking their own questions about nature, sets the stage for a changed perspective in adulthood, Johnson explained.

"I feel that in today's world we face a lot of environmental challenges which unfortunately our children are going to have to solve in the future," she said, pointing out that they will be the new voice for the environmental movement.

"Our kids are going to have a different perspective on it just because there's been such a shift in the last generation and I can only foresee a bigger shift in the next generation of kids coming up."

Woodruff and Johnson are not alone in their unshakeable beliefs about the dire need for children and their mothers to relish time in nature together.

In Squamish, chiropractor Ange Wellman-Drysdale has embarked on a personal mission to spur mothers to take to the forest. The group, Squamish Babes in the Woods, was founded in 2011 by Wellman-Drysdale out of a desire to share time in nature with her daughter and to form a community of mothers.

Embarking on twice-weekly hikes in the Squamish area during the summer, mothers don their backpacks and with babies onboard, set off on the trails.

Helping new mothers to feel part of a community of mothers is an essential component to her group, Wellman-Drysdale noted.

"I think first and foremost, being a new mum can be an isolating experience," she said. "You are going through a lot hormonally ... it's a massive life transition. I wanted to create an atmosphere where everyone felt welcome."

She says she feels her daughter has benefitted enormously from the time outdoors.

"I felt with my daughter it was so healthy for her to be in the woods ... I felt like after we got back from our hike, she would be so happy, babbling more than at any other time of the day."

Wellman-Drysdale said that this summer, in addition to the mother-baby hikes, she will be introducing Hikes for Tikes – an opportunity for mothers and toddlers to wander in the forest and explore together and develop that bond between mother and child.

"For me, being in nature is a very spiritual experience even if you are not consciously aware of it, I think babies are the essence of life and so is nature and I think to have them in the natural environment at such a young age is really, really good for them."

That connection with Mother Earth needs to be nourished in young adults as well, says mother of two, Heather Royal of Squamish.

When her eight-year-old daughter Tehya Royal Brant announced one day she wanted to be a naturalist, Royal did not quash her dreams – instead she assisted her in the creation of the Squamish Young Naturalists Club (SYNC), which has been very active in recent months, drawing in community experts to lead monthly field trips.

Royal says she encouraged Tehya to "enjoy that process of making a relationship with Mother Earth and finding out all the intricacies that she can of how we are connected to our Mother."

She has extended her influence from her own daughters to the community at large, through her involvement in rites of passage ceremonies, organized in conjunction with the Squamish Nation.

Describing it as a "coming of age" for young women, for the duration of three days activities are held for the youth and their mothers, grandmothers and extended family members.

"It's about drawing upon Mother Nature as our mother and looking to nature for the answers as we change and evolve through our process of life, birth, puberty, adulthood, giving birth, old age and death," Royal explained.

Puberty involves transformation, she continued, which can often be accompanied by some trepidation or anxiety, yet she says that through the activities, the young women become more confident about the changes happening to their bodies.

"I always find that they really respond so deeply and powerfully and they become my teachers," said Royal.

"It's amazing how some of these young women are now paving the way for the future for the younger ones," she said.

"Instead of being worried about changes to their bodies, they know there is a special event and ceremony. It's special and sacred and they are joining a collective group of women."

Her relationship with her own daughters has grown deeper as a result of regular time in nature together.

"There's this larger mother that takes care of us and I believe true wisdom comes from observation and dialogue with nature," Royal explained. "So we have these lovely profound and fun conversations as we go through the woods, or even silences where we are inspired by the way a rain drop sits on a leaf or a beautiful frost pattern on a log. I think that kind of connection is deep."